The Next Food Network Star - Episode 7

At the beginning of this episode, we see the four remaining wannabes cram their hopes and soon-to-be-shattered dreams into their already overstuffed suitcases and head to the airport for their trip to Lost Wages.

Cheap-ass Food Network not only flies them via Southwest (with plane changes in Baltimore, Atlanta, Denver, and Dallas) but makes the contestants spokesmodels for the airline in a most-obvious product placement. But...it's an improvement over seeing the semi-retarded Jill Wagner's face and hearing her say "Mercury Malign" (instead of Milan) and "the best redio on radio" for the umpty-gazillionth time. However, TVFN doesn't get nearly enough money out of Southwest as we are treated to at least half-a-bazillion Mercury commercials during the program. But I digress. 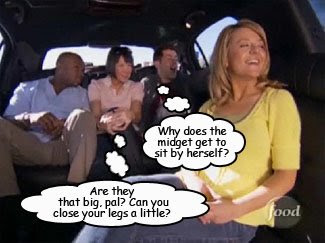 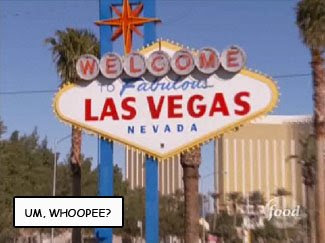 At least they got a limo ride to their hotel, the fabulous Caesar's Palace. Kelsey was all excited that they were greeted by "Caesar himself" once inside. Somebody break her stupid little heart and tell her that it's just a dude in a costume, please. 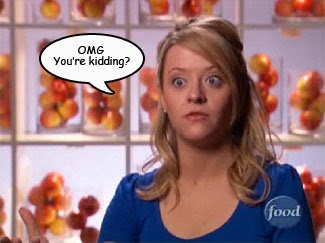 After lunch at Mesa Grill, where they are forced to share a booth with Paula Deen who complains that Bobby Flay doesn't use enough mayonnaise in his Southwest cuisine, the wannabes are shown their tacky-ass suite upstairs at Caesar's. It's a lame attempt to make up for flying Southwest. Couldn't spring for the Wynn, huh TVFN? 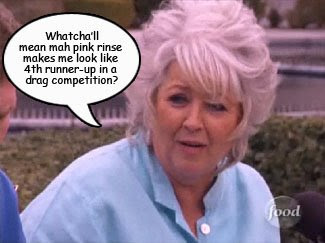 The next day, the wannabes are taken out back and shot and thrown in the pool and given information about the day's challenge. 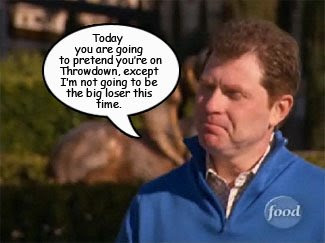 Lisa will go head-to-head with Adam, and Aaron will face Kelsey. Each will have 75 minutes to not only prepare his or her signature dish, but also to prepare a version of their opponents signature dish. As if that wasn't enough stress, the wannabes would be questioned by the judges and the annoying Dana Devon would come around and stick a microphone in their faces as they cook. AND, they had to make the dish somewhat Vegas-y.

Lisa and Adam go first. Her signature dish is of course cassoulet, the complicated and time-consuming dish of white beans, sausages, and duck confit. Adam's signature dish comes from a blue box. But this time he's going to jazz it up with some actual cheese. 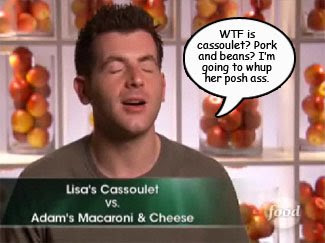 For his version of Cassoulet, Adam plans to open a can of B&M Baked Beans (is that the most appropriate company name for that product, or what?) and top it with a couple of hot dogs. Lisa's macaroni and cheese will contain Charolais, Mimolette, Roquefort, and a soupçon of Tomette de chèvre de Haute Maurienne, garnished with shaved black truffles and a dollop of beluga caviar.

Adam realizes that Velveeta isn't going to cut it, so he throws in a little lobster as well. 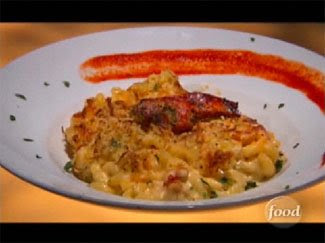 Surprise! The judges loved Adam's mac and cheese and hated Lisa's. Paula Deen said it didn't have enough mayonnaise for her tastes. 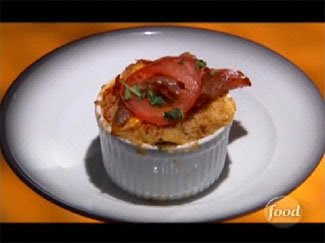 As for the cassoulet, Lisa's was the clear winner. Bobby Flay said it was probably the best cassoulet he had ever eaten. Adam's wasn't too good. 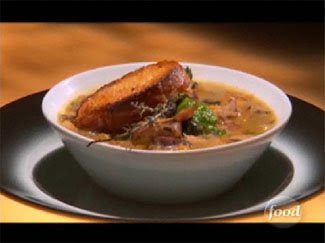 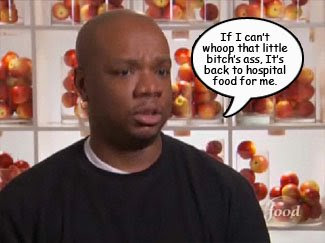 Aaron mentioned that his dish has a chipotle glaze. When asked by Bobby Flay, King of the Chi-Po-Ti-Lay if he knew what that was, he claimed ignorance. Not only that, he mispronounced it horribly as "chi pol tay." Smarty-pants Adam piped up that a chipotle is a smoked jalapeno and was all pleased with himself because he was aware that the judges questioned his food knowledge. See, he knew something!

Kelsey ran around like a chicken with her head cut off attempting to make something Vegas-y with the pork dish. Rather than do a conventional stuffed porkchop, as Aaron did, she decided to go all artsy and create a Napoleon of pork layered with stuffing. She used horribly overcooked pork tenderloin and made sure to announce that to the annoyance with the microphone that hovered over her as she cooked. For her chicken dish, the Vegas twist was using flamingo meat, with sequins substituting for breading. 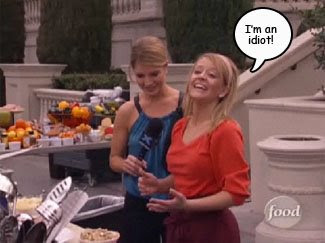 Meanwhile, Aaron was so busy with his pork dish he completely forgot about having to do a version of Kelsey's chicken. Lisa was aware of this and telepathically sent the message to Aaron that he had 18 minutes left and he had better get his ass in gear. Either Lisa is a very nice person, because she is in competition with Aaron and really should be praying for his failure, or she really hates Kelsey for some reason. I'll go with b.

Aaron crumbs his chicken and gets it in the deep fryer in plenty of time. 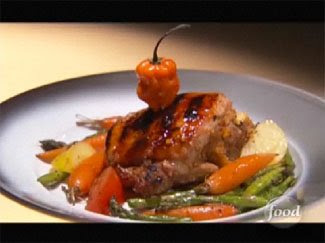 That appears to be a habanero garnishing that chop...not a chipotle. But damn, it looks good enough to eat! The judges agreed. They adored Aaron's pork. And they loved his version of chicken parm too. 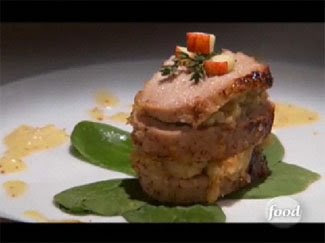 Kelsey didn't fare as well. Her pork was indeed overcooked. And her weird chicken parm on skewers wasn't the homey, hearty delight that it should have been. She herself was skewered for straying from her home-style cooking and attempting something more restaurant-y.

After the competition, the wannabes face the judges. Tushface, Fogelson, & Co., praise the food and criticize the personalities. They are understandably frustrated because it's really all about the personality and their four finalists are displaying varying degrees of suckitude on camera. 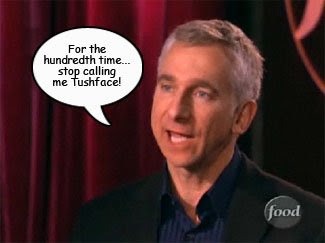 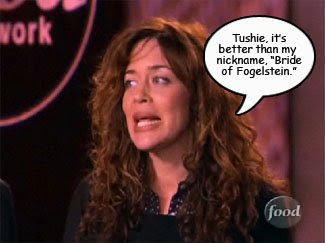 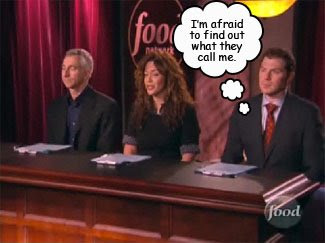 When all is said and done though, Kelsey is asked to leave. Her food was a disaster and the judges were finally tired of her annoying personality and her constant need to announce that she had recently been to culinary school.

It was pretty evident in the first five minutes of the show that Kelsey was going to leave. In her first confidential, she spoke as if she had a cold. Immediately I realized she had been crying. It was probably because PETA was waiting to deal with her after her atrocities with that flamingo.

Lisa and Aaron got to cry too. 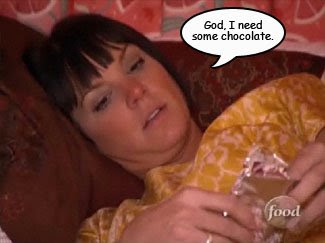 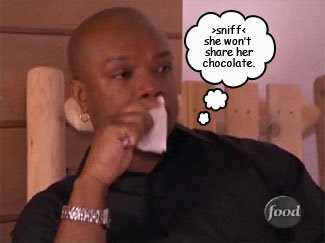 Next week: a visit from the obnoxious Guy Fieri! (I thought I'd warn you in advance in case you wanted to skip that episode.)
Posted by theminx

Since I don't actually watch TNFNS, I can't really comment on the recap...but I can tell you that apparently the internet doesn't want me emailing you. I tried your other address but it bounced back. Can you try emailing me? Either kit at kitpollard dot com or kit_pollard at earthlink dot net.