Recently I've been seeing a lot of a new commercial for Red Lobster that features bacon wrapped scallops. Although it doesn't look particularly appetizing, as most food in commercials is dripping with some sort of mucilaginous glaze, the concept struck me as something I wanted to eat. So I stopped by the Giant today, hoping they'd have some big diver scallops in stock. No such luck - but they did have medium-sized ones and "super colossal" shrimp. Mr Minx is not a big fan of the scallop, so the shrimp were for him. I also bought a package of Gwaltney "40% less fat bacon" because I couldn't imagine a lower fat bacon that wasn't made from poultry. 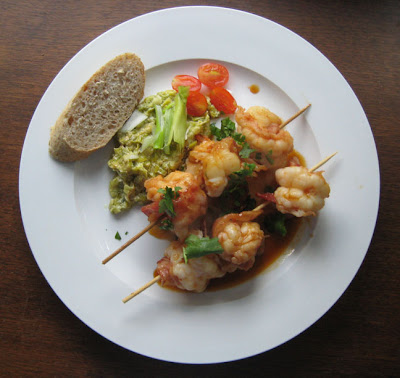 Once home, I pre-cooked the bacon so it was done but still pliable. It seemed like regular old high-fat bacon to me. I poured most of the rendered grease out of the pan but saved a little in which to cook the seafood. I also prepped a glaze of brown sugar, soy, mirin, and sriracha. But what to do as a side dish?

Mr Minx had bought some leeks last week and they still lingered in the fridge. I cleaned and chopped them, sauteed them in butter, then added a bit of chicken stock and half and half, and cooked them on low heat until most of the liquid had evaporated and the leeks were practically a puree. Voila - leek fondue.

When it came time to cook the seafood, I realized I had not thought to buy toothpicks with which to secure the bacon, so I used skewers instead. I added a tiny bit of olive oil to the bacon fat in the pan and arranged my skewers of bacon wrapped shrimp and scallops. After turning them once, I poured in the glaze and basted the skewers until I thought everything looked done, maybe 12 minutes total.

The leek fondue and skewers were garnished with some cherry tomatoes from the garden, plus chopped cilantro and slivered green onion (left over from last night's yummy Chinese-style duck "tacos"). The fondue was smooth and had a great mildly oniony flavor. The seafood was nicely bacon-y with a subtly sweet and hot flavor from the (non-mucilaginous) glaze. Mr Minx thought it tasted very exotic, considering the ingredients were pretty pedestrian, and I felt it was a successful meal. Perhaps I'll try this one again, but either broiling or grilling it so the bacon would get crispy. (Although personally, I prefer soft bacon.)

Tomorrow night: I will attempt a dish from the French Laundry Cookbook. Wish me luck!
Posted by theminx

Bacon: Is there nothing it can't do?

Love your blog, got directed here from the Top Chef boards over at Bravo. Love the way you skewer "The Next Food Network 'Star'".

My only regret is that you only blog about food related issues. Project Runway would provide a wealth of material for your skills.

My dear Anonymous - I DO blog about Project Runway (and Shear Genius too) on my fashion blog: http://minxbeads.blogspot.com

I do hope you pop in there too. And use a name. ;) Hard to tell all of my many anonymous friends apart you know!

Looks great! Where do you buy sriracha around here?