This episode went by fast and furious for me. Maybe because I was drinking.

It started out, as always, showing the chefs at home, puttering about the kitchen, etc. Spike is ready for one of the Lesbos to hit the road. 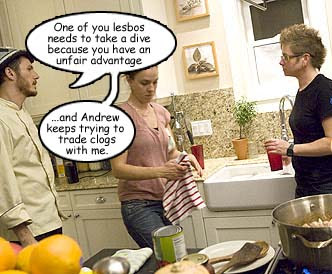 Seconds later, we see Padma and the cheftestants in the Top Chef kitchen with Daniel Boulud. The Quickfire Challenge this episode is to create a beautiful vegetable plate using three techniques that might impress Chef Boulud. 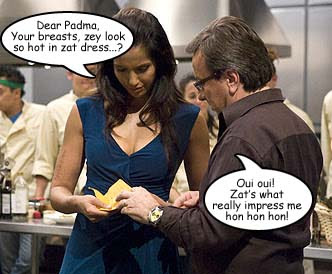 The chefs commence to julienne-ing, tourné-ing, brunoise-ing, and generally making salad. After tasting, Daniel puts Manuel, Lisa, and Nikki on the bottom. He's a pretty harsh critic. Zoi, Dale, and Richard get cited as the best, with Dale taking top honors and immunity from elimination in the next challenge. Which is...

...to create a dinner with each course inspired by a favorite movie. Movie critic Richard Roeper and actress/comedienne Aisha Tyler (last seen being crushed to death when a plane lands on her car in the NBC series Boob Ghost Whisperer) would be among the diners, the former because he's a movie critic, and the latter because.... Errr...I'll have to get back to you on that.

The chefs draw knives to see who would be paired with whom, and Dale got to choose which dynamic duo he wanted to work with. The groups then went off to discuss movies and menus.

Ryan, not sure if Mark is from New Zealand or New England because of course they are so similar and right next door to each other, has a hard time communicating with his partner. They have no movies in common. Rather, Mark reels (ha!) off a list of Aussie and Kiwi movies including one called Bad Boy Bubby. A quick look at the IMDB entry for that film reveals keywords of "Animal Abuse, Disturbing, Dead Cat, Surreal, Vulgarity," so I can see why Mark might choose that one as an inspiration for food, especially if he's training to be a serial killer or something. Another odd choice is Bravo's to subtitle Mark for part of this scene. New Englanders Zealanders do speak English as a first language.... 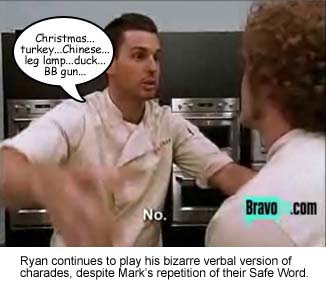 Finally, Ryan comes up with A Christmas Story (well, he comes up with part of the plot, he can't remember the title), particularly the scene where the family turkey is ruined and they are forced to eat Peking duck for supper. Mark has never seen the movie, but he's a sport and goes along with it.

Andrew is working with Richard and Dale on food inspired by Willy Wonka. He is convinced that their food will make the judges "culinarily crap in their pants." 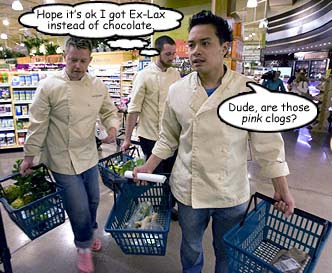 He also thinks that they should present the food as Oompa Loompas. He even runs the idea past Spike. 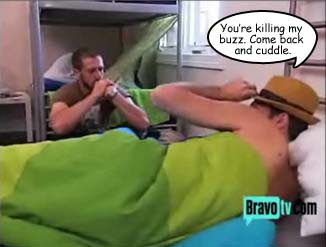 The next day, we see the cheftestants hard at work in the kitchen. I am very impressed at how well they all work together. There doesn't seem to be any huge ego problems, as there were in past seasons. In the team of Richard, Andrew, and Dale, Richard was allowed to take the lead without question. And when his mini smoker gadget crapped out on them, the team rallied to smoke their salmon over a chunk of burning wood, rather than to bitch at each other and point fingers. Andrew, who in the first episode led me to believe that he had Tourette's, was surprisingly respectful and even said, "yes, Chef!" to Richard at one point. 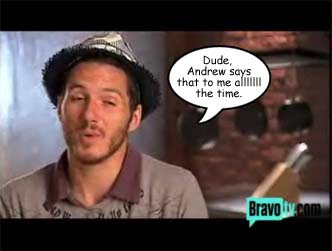 The first course was theirs, a salmon dish with "faux caviar" and a white chocolate wasabi sauce. The judges were very impressed, despite Andrew's performance. And the fact that he used tapioca as a stand-in for caviar for the second time now. 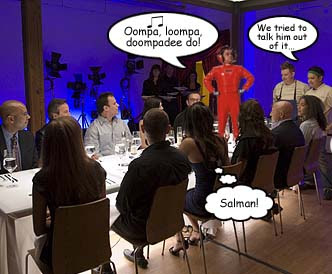 Third course was Nikki and Jennifer's Il Postino-inspired tortellini, which Richard Roeper really loved even if the other judges weren't all that excited about it. 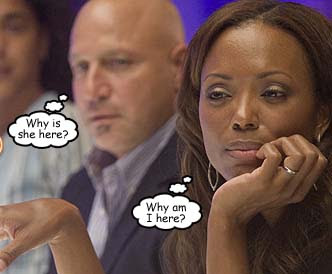 Did we ever figure out why she was there?

The fourth course was Ryan and Mark's Quail breast with carrot puree and a spring roll. Although they strayed from A Christmas Story's Peking duck, the judges were impressed with both their choice of bird and the story. The fact that Ryan didn't have to flap his arms and gesticulate wildly to get his point across helped a lot too.

Then came Antonia and Zoi's fifth course, inspired by the Almodovar movie Talk to Her, full of vivid colors and strong women. So they serve two skinny lamb chops with a cream-colored cauliflower puree. The only vivid thing on the plate was the rareness of the lamb, and that wasn't all that bright. While the flavors were good, the food didn't quite match the movie. 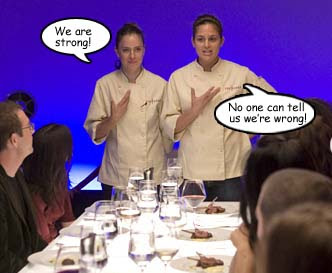 What I thought was a bizarre choice of movie, Top Secret's cow scene yielded a NY strip with short rib won ton and a caramel sauce by Lisa and Stephanie. The judges swooned over this one and for a minute there I thought Stephanie had a third victory in the bag. 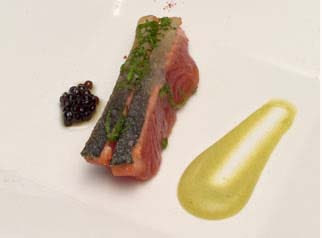 However, the first course of chocolate and salmon proved to be the top choice and Richard was credited with the win.

The cheftestants sequestered in the storage room bitched that there was no way chocolate and celery root could taste good, and Zoi whined if that was what the judges wanted "then seeya later." She, like many other chefs who have competed on the show, doesn't seem to realize that it takes more than the ability to poach an egg or make pasta from scratch to be a Top Chef. Innovation and a strong understanding of how flavors work together--unusual and otherwise--are huge parts of being successful in a professional kitchen. Otherwise, Zoi, you may just be a cook. 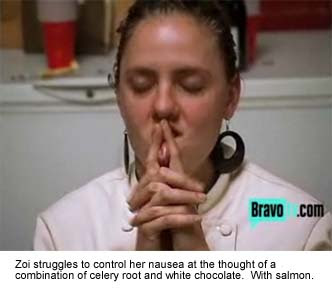 Then it was time to pick a loser. Ordinarily, the team leader is the one punished or rewarded in these challenges, so Spike should have been blamed for the failure of the sea bass spring roll (as it was his idea). Instead, Manual gets the boot because he was a pussy and didn't assert himself by pushing Latino flavors over Asian. And he chose to pickle some Swiss chard. Oh yeah, that's a big sin in my book too. 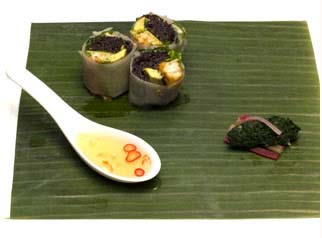 Plus the dish was ugly.
Posted by theminx

You crack me up. And I LOVE the fact that we both mentioned Lesbians/Clogs/Spike/Andrew in the same context. We rock.

Too funny for words...you said them all. You are a clever little Minx - did I make a funny?

Thanks for you input at Dining Dish

Hey Kathy, sorry for taking so long to reply... Iranian fairy floss is not halva at all... try my post back in October for a detailed description or look up www.ashrafi.net where they sell it over the net... Vida x

I was also shocked at the lack of ego in the kitchen. I'm sure the producers were dismayed.

And is it just me, or does Zoi always look like she's about to burst into tears? Like, even when it's completely not appropriate to cry?