The Minxes love dim sum and this weekend we tried something new: Taiwanese dim sum from A & J in Rockville. Our favorite Hong Kong-style dim sum at Jesse Wong's Hong Kong features multitudinous dumplings along with seafood, noodles, and vegetable dishes. Taiwanese dim sum is quite a different animal. A & J's menu was heavy on fried things and noodle soups, and not a shred of seafood was to be found. 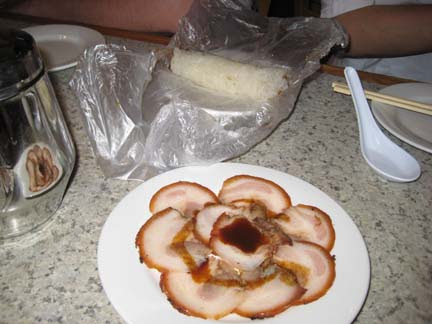 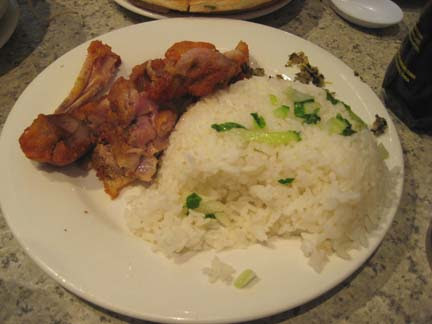 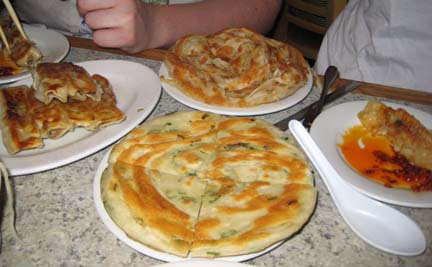 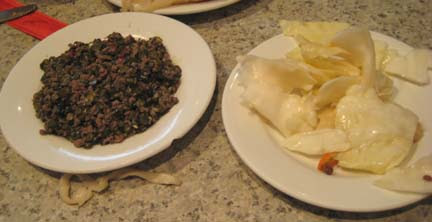 Two pickled dishes: long beans with ground beef, and cabbage. The long beans were cut up very finely, and the flavor of the dish was not at all what I would call "Chinese" or even any sort of Asian. There was a spice in it that reminded me of caraway seeds, so I had the impression of eating a Reuben sandwich (I have a good imagination). MinxBrother thought it was more like a Middle Eastern dish. In any case, it would make a fabulous empanada filling. The cabbage tasted of Western pickling spices, and there were peppercorns visible among the pieces of veg. It wasn't sweet, unlike the pickled cabbage they sometimes serve at New Han Dynasty.

We also had steamed pork dumplings that were much like those from a Hong Kong dim sum, and a cruller, which was greasy and delicious. Unlike other dim sums where I can eat and eat and eat, I got filled very quickly this time. Probably all the grease. It was good, but I missed my cheung fun (shrimp crepes), turnip cakes, taro balls, savory shrimp, Chinese broccoli, shrimp dumplings....

Hi,
Saikat from BlogsJam here.
Wanted to email you, but could not locate your email address on the
blog. we have 2 cool widgets ( a slideshow widget and a content widget
) which can help enhance site interaction and reader's experience. pl contact me at saibose@gmail.com so that i can send you the slideshow widget for your blog.

Hey, I'm not going to spam you with stupid things about widgets here. But I do have to say I LOVE dim sum. I get it every time I visit my friends out in SoCal (sushi used to be our thing - but there's too much sushi in Baltimore that I never bother to get it in Cali anymore). I just wish there was some closer to me than Rockville :(