In which reuniting feels so good.... 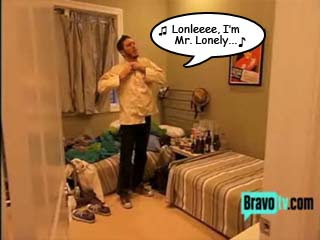 The show starts off with the usual yoga/pilates/wake-up sleepyhead montage. Jen is still annoyed that the love of her life was booted two episodes ago and vows once again that she is going to win this competition for Zoi. And things apparently didn't work out between Spike and Mark. 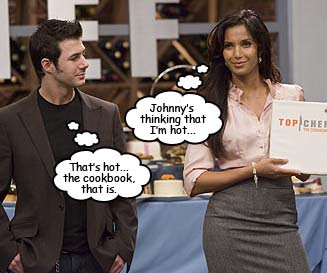 When the cheftestants get to the Top Chef kitchen, they see it filled with multitudinous desserts, which of course fills them all with fear and loathing. The feeling of dread is cemented when the chefs see Padma standing next to hottie pastry chef Johnny Iuzzini of Jean Georges. Nooooo! Pastry is scary! It involves science and paying attention! And yes, the Quickfire Challenge is to create a delicious dessert. Padma adds that if the chefs don't have a go-to dessert recipe in their repertoire they should improvise. Foreshadowing, kids! 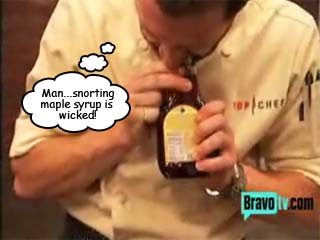 Richard thinks that bananas resemble scallops, so he does a spoof on a savory dish. Half the other chefs take his lead and use bananas in their dishes.

Hottie Johnny and Padma make the rounds and taste the 10 desserts. Spike's "I'll show them I have balls," soufflé, as well as Antonia's and Mark's are the least favorite dishes, while Dale's, Lisa's, and Richard's come out on top. Richard's play on scallops pleases Hottie Johnny most and he is given immunity for the Elimination Challenge. 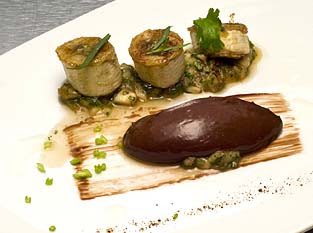 Looks like bananas and a skidmark (plus bonus poo) to me, but what do I know?
Padma then announces that the chefs will be going out on the town to see some comedy at Second City. They are excited and head back to the house to primp and pretty themselves for the evening's festivities. 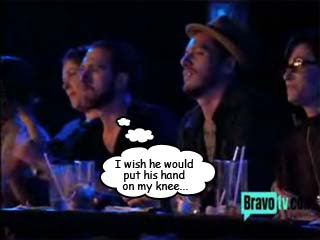 During the improv show, the comics ask the audience to shout out colors, emotions, and ingredients. The chefs suddenly wise up and realize that they're going to be doing some improvisational cooking. Lucky for them they don't have to do it right there at that very moment. The audience's contributions are grouped together into "yellow love vanilla," "purple depressed bacon," "green perplexed tofu," "orange turned on asparagus," and "magenta drunk Polish sausage" and the chefs are left to their own devices to create a menu of five courses riffing on these keywords. 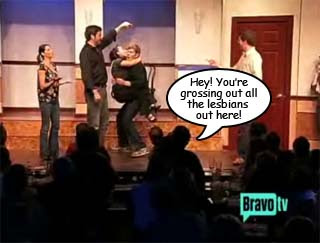 Back at the house, the chefs pair up and start planning their dishes. The next morning, they shop.

Spike, on the yellow/love/vanilla team with Andrew, is elated as he finally gets to make some butternut squash soup. He's also pretty thrilled that he and Andrew finally get to work together - in the kitchen. Awwwww.... 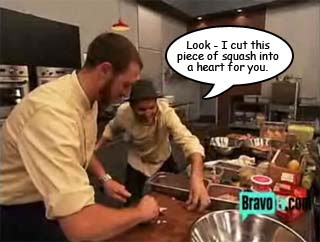 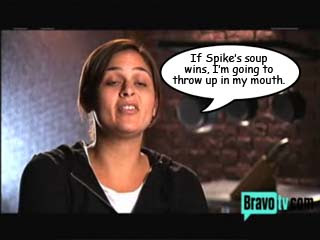 Unfortunately for them, there are no machines in the equipment room. No food processors, no juicers, no blenders, nothing. Andrew resorts to using a food mill to get the squash puree as smooth as possible. 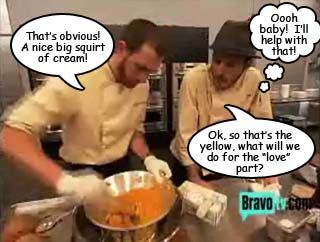 Richard and Dale work with Green/perplexed/tofu, which they transform into green curry and tofu marinated in beef fat. Richard should win this thing for being a damn genius. Even tofu tastes good when smothered in meaty goodness!

Jennifer and Stephanie get the Orange/turned-on/asparagus combination. To me, this seemed like the easiest, most food-friendly grouping of words, as the color is also a food. These two, however, decide to complicate it by making it a "menage-a-trois" and adding goat's cheese and a big old slab of toast. Personally, I am turned on by a slab of cheese and bread, but will the asparagus feel the same way?

Antonia and Lisa get Magenta/drunk/Polish sausage and decide to throw the whole concept out the window by making Chilean sea bass with chorizo. From their high horses they insist they're not going to cook Polish sausage in beer, the logical choice. A nice beet soup garnished with sausage and a shot of vodka would have handled the challenge nicely. But nooo.... We hear Antonia in a voice-over talking about Lisa being Cuban and preferring chorizo and all sorts of excuses. 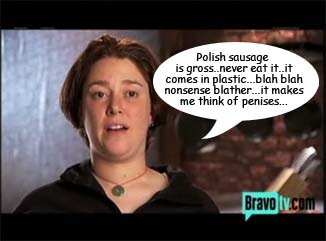 The truth comes out.
Lisa disses Polish sausage by describing the only kind she's had, which by her description sounds like that lame Eckrich smoked stuff that I, too, hated as a child. But I will confess that three of my grandparents were born in Poland so I am familiar with the cuisine. The Polish sausage we had for every holiday was the fresh kind, redolent of garlic and absolutely delicious. There are other kinds of Polish sausage as well - kiszka, or blood sausage, which I loved but we only had at Easter; kabanosy, a thin air-dried sausage flavored with caraway; krakowska, a thick salami-like sausage. Others too, but I won't go on as you've probably already learned more about Polish cuisine than you care to.

Tom comes in for a brief Sniff 'n' Sneer to tell the chefs that the judges will convene at their house, so food needs to be packed up and taken home. There they will get an hour to finish and plate their dishes.


At this point, we get a commercial break for the Glad Family of Products. This is a spot that's been run incessantly over the past several weeks and it has consistently struck me as stupid. A bland-looking Waspy female named Erica is being touted as Mrs Economical because she uses cheap Glad products instead of the more expensive Ziploc brand of bags. She's so in love with her Glad bags, she stores her peas and carrots in them! Hey, Erica - don't those things come pre-bagged in the freezer section? Erica also keeps her cheese and pre-cooked macaroni in Glad bags. The funniest part of the whole commercial is the funky, "Shaft"esque sountrack.

Why don't they show Erica scraping the remainder of her white bread lunch of boiled hot dog, macaroni and cheese, and peas and carrots into a Force Flex bag? 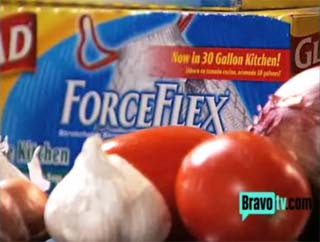 There's something very gay about that product name.
Back to the show...the chefs are plating and the guests arrive and take their place at the large dining table set up in the front room. Jen and Stephanie attempt to "sex-up" their food by talking about "long hard logs of goat's cheese" and each down a skinny spear of asparagus in a so-not-sexy manner. Not sure whether to laugh at them or with them. 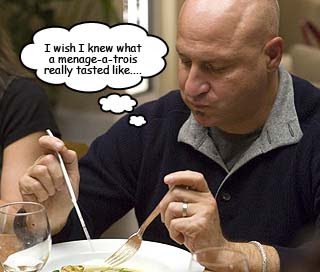 Antonia and Lisa bring out their un-drunken, non-magenta, Polish sausage-less dish, accompanied by a shot of tequila for themselves. Nothing for the judges, who definitely noticed their stinginess with alcohol and immediately held it against them. Spike charitably remarked that the dish "looked like turds," which is perhaps what Antonia meant by an earlier remark that sausage on a plate looked inelegant. 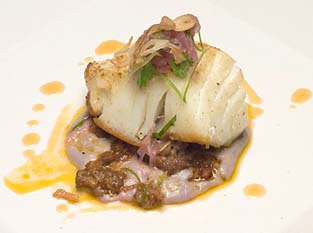 The non-magenta purple potato puree looks...ahhh...softer than turds
Mark and Nikki served pork loin "depressed to be on the same plate with Brussels sprouts," with glazed bacon in a purple grape sauce. I'm always thinking that Nikki is next to be out, so was surprised when the judges really enjoyed this dish.

After dinner, the cheftestants get herded back to the Glad Family of Products Commemorative Storage Room to stew as Padma puts on her Death Face and requests Andrew, Spike, Dale, and Richard to come out and meet their fates.

The bile rose in Antonia's throat as Spike and Andrew's soup was deemed the "best-seasoned dish all season," by Tom. (No doubt it was all the extra added "love" their little reunion added.) But she was saved further bad taste in her mouth by Dale and Richard's win for their f@#&ing brilliant tofu steak dish. They each got a bonus gift of $2500 worth of Calphalon cookware. All well and good, and I was happy to see the team win, but I want to know why one of them wasn't singled out for the victory? (It's perplexing....) Why a dual winner this week, without getting any conversation to that effect between the judges? While Dale's green curry sauce was no doubt delicious, it was obvious that Richard's "steaks" were the crowning glory. 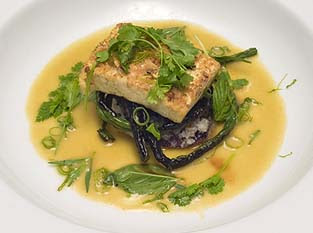 Not surprisingly, Antonia and Lisa and Stephanie and Jennifer were on the bottom of the pile. The lack of Polish sausage was a problem for the former, and Hottie Johnny suggested that they should have cooked Polish sausage in beer. The girls are just lucky that Bill Swerski and the Superfans weren't judges; they'd have rioted if they got fish instead of sausage and beers!

The supposed suggestiveness of the asparagus was but one of the issues for the latter pair. Hottie Johnny just didn't see skinny green asparagus as particularly phallic, and the cheese was far too commanding a presence. 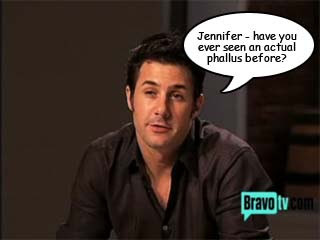 Stephanie has too many wins under her belt already, meaning Jennifer had to be the one to get the shaft, so to speak, and is now able to join her love Zoi moping in San Fran. Another reunion, this one bittersweet and off-camera, to conclude the episode. 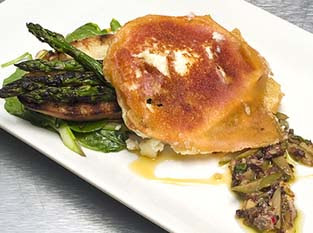 Is the bread a bed, the asparagus lovers, and the cheese a blankie?
Posted by theminx

The Polish sausage comments are hilarious. What is so wrong with Polish sausage? I have one word for Lisa (and to a large extent Antonia) on that note: SNOB!!!

I'm not so concerned about Nikki for now. I still want to see Spike go far, far away, although he did SLIGHTLY redeem himself in my eyes tonight.

You are right - that cookbook is HOT!

Don't know if Jen's seen an actual phallus. maybe Johnny has? (That's not a dig - it's actually wishful thinking on my part).

Excellent job - as always. I am SO glad that Andrew and Spike got to "work" together this week...