Did I think, when I started recapping this season of Top Chef, that I'd still be doing it from home in Week 10? Yes, actually. I was thinking we'd be home at least 12 weeks, but it's looking like it will be far longer--for me at least. I feel like I have some form of Stockholm Syndrome. Not that I have fallen in love with my "captors," but that I have come to strongly agree with the whole stay at home thing and am not planning to go anywhere anytime soon. Sure, I miss hanging out with people, one or two in particular, but as an introvert, I don't crave it. I did get to spend a little time with a few friends this week--outside, 6+ feet apart, on a windy day--and it was nice. We talked about food, the fate of restaurants (one friend was a chef, another the doyenne of the Baltimore food scene), and Top Chef. My chef friend thinks Gregory has what it takes to win it all. Maybe Melissa. You all know I'm rooting for Bryan, but I don't dislike anyone this season. Hell, I'd be happy if Stephanie won, as she is very much the underdog in this competition.

I wasn't really feeling this episode. It wasn't exciting to me. But then very little is these days.

When the cheftestants enter the Top Chef Kitchen, they find Padma standing with Sherry Yard, pastry chef extraordinaire. Yard has won 3 James Beard awards and spent nearly 20 years as executive partner for Wolfgang Puck's restaurant group, in charge of pastries for Spago, etc., and is eminently qualified to judge the Quickfire Challenge.

Each cheftestant must create a dessert to wow Sherry. They have access to a basic pantry of flour, eggs, butter, etc, but they must "win" more exotic ingredients via a blind taste test. This Quickfire is my favorite every season, and it's nice to see it get a little twist. I get a perverse pleasure of watching people put strange things in their mouths. (Get your mind out of the gutter!) A spoonful of gloppy/milky/mealy ricotta cheese or hot sauce makes for some interesting facial expressions. This season, each chef gets 5 minutes to taste and identify as many of a selection of 20 items as possible. Items that are identified correctly may be used in their dish; also, the more correct, the more time they get to cook. Two chefs with the highest score get an hour, the two lowest get 30 minutes, and the two in the middle get 45 minutes.

Everyone leaves the room except Bryan, who starts off the blind tasting. His palate is good enough to score him 45 minutes of cooking; the same goes for Melissa. Stephanie has the highest score, with 15 of 20, and gets an hour, Gregory also gets an hour. 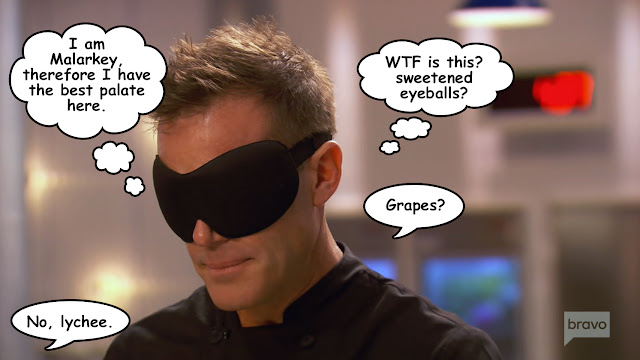 Karen and Malarkey suck balls at this game, correctly identifying 8 and 7 ingredients (out of 20) respectively, and get a mere 30 minutes to work. Honestly? Are their palates that bad? I'd love to participate in a blindfolded tastings and think I'd do pretty well.

I don't know why chefs choose to make panna cotta in a competition with a time crunch. Like Chopped. Thirty minutes isn't enough to get gelatin to set, even in a blast chiller. Karen finds that out the hard way. Malarkey is smarter, choosing to bake a cake in the wood oven. If one of those things can cook a pizza in 90 seconds, a cake shouldn't take much longer, huh? He also makes ice cream for the third time in this competition. Melissa was smart to have several desserts in her arsenal already, including an olive oil pistachio cake that she makes in a muffin tin and serves with a custard she turns into ice cream with the help of liquid nitrogen. Stephanie also uses science to make the ice cream to accompany her peach and tarragon crostata because the ice cream maker is still full of Malarkey's residue. 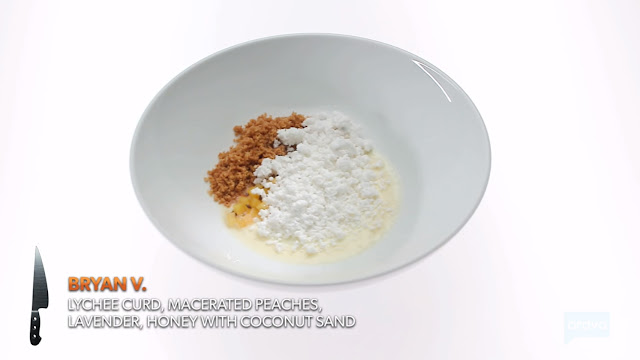 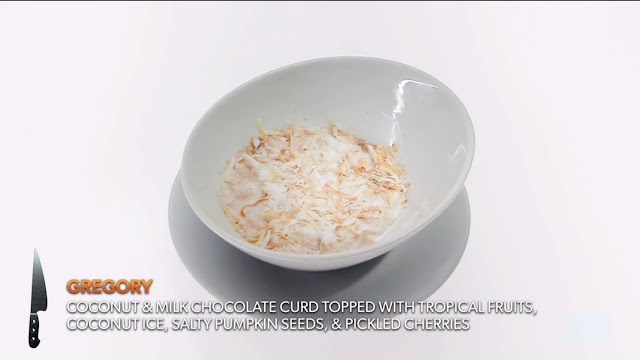 And then we have Gregory and Bryan. Bryan has created desserts for his restaurants, so it's not like he doesn't know what he's doing. But maybe he doesn't? He serves a bowl of wet sawdust that is allegedly lychee curd with macerated peaches and coconut. Gregory also makes a bowl of that involves coconut and milk chocolate curd and a whole bunch of toppings but also looks like wet sawdust. Or even worse--oatmeal. I dunno. If I was served a bowl of curd with stuff on it in an expensive restaurant (which means it would be a $12 bowl of curd), I'd probably throw it at the chef and demand some cake. 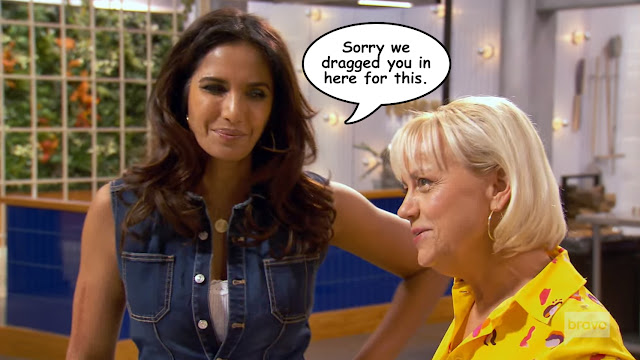 Padma and Sherry are especially stone-faced. There seemed to be far more smiles and compliments during the last 9 tastings. These ladies find the most fault with Karen's un-set panna cotta, and Bryan's bowl of sawdust...not because it was sawdust, but because the ingredients were too flavorful and competed with each other. Melissa's and Malarkey's cakes put them on top, with Melissa getting the win and an advantage in the Elimination Challenge. Which is...

The Cheftestants will cook for a group of elite Olympic athletes making dishes inspired by Japan. Huh? Well, the Summer Olympics were going to be held in Japan this year. Yeah, I completely forgot this was an Olympics year, too. Emphasis on was. The event has been reschedule for 2021, and there's no saying it will happen then, either. But when Top Chef was filmed, last fall, there was no hint of the coronavirus disaster that would put much of our lives on hold. Ah, don't we all long for those good old days, those innocent times, to return? Those days of sitting in traffic as we commute to work, flipping the bird to those assholes who cut us off on the beltway, and buying gas more than once every 10 weeks! Those days of being able to push our shopping carts right up against the person ahead of us in line because we are in such a goddamn hurry to put our stuff on the conveyor belt! Those days before every toddler in the neighborhood had a skateboard, scooter, or bike and got in my way as I attempted to walk my kid-hating dog! (I quite miss those toddler-free days, actually.)

Before the chefs do anything, they get to eat some fancy Japanese grub. Niki Nakayama and Carole Iidi-Nakayama, co-owners of the restaurant n/Naka are on hand to feed the cheftestants and discuss the art of kaiseki, or a multi-course dinner of very special dishes. The challenge is for each chef to create one course of a 6-course progressive dinner to be served at the LA Coliseum. Now, I'm not sure why they felt the need to use the word "progressive." When used to describe a meal, it normally means that each course is eaten somewhere else, be it a home or restaurant. Though each course will be prepared by a different chef, it will be served in the same location to the same people sitting at the same table. Or will it? Perhaps, being that the diners are Olympic athletes, the chefs will be chasing them up and down the aisles while doing backflips? While that might be fun, it would smack too much of that terrible season filmed in Texas, specifically the episode in which the chefs were made to source ingredients while riding a bike around the Alamo in 110 degree heat. Ugh. Coincidentally, the finale that year was made to recreate the 2010 Winter Olympics, replete with events such as the biathlon (with guns!), cooking in a moving ski gondola, and the newest and perhaps most dangerous event, hacking ingredients frozen into a block of ice with an icepick. God, I hated that season.

And I digress yet again.

After the chefs ooh and aah over the delicate meal, Melissa gets to use her advantage. She chooses which course she wants before assigning the rest. But she's nice. Rather than stick her competitors with something they might not want, she attempts to match them to their strengths. Better to win (or lose) against strong competition. The bonus for this week's winner is a trip to the 2020 Olympics! Or wait...2021. (2022?) Much better than Gregory's prize of several weeks ago--a trip to his living room to watch the new Trolls movie while on a Zoom meeting with Nini, his date for the event.

This kind of thing seems particularly up Bryan's alley. His restaurant, Volt, in Frederick, Maryland, used to serve a 21-course meal called Table 21, a bargain at $120 per person. (Currently Chef's Counter is 15 courses for $150.) It's been 10 years since I ate Bryan's Voltaggio-style kaiseki, and if we ever get out of this pandemic (and if Volt is able to reopen), I think it's high time to experience it again. Mostly to see Bryan frown at me repeatedly while threatening me with tweezers. (Let me have my fantasy, ok?)

The cheftestants then hit up Whole Foods for a late night shopping trip (it's dark outside). 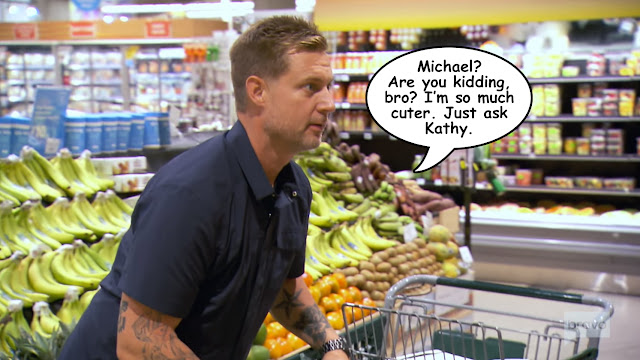 It's so dark that Malarkey calls Bryan by his brother's name. Though they have the same coloring, I don't think the two resemble each other all that much.

The next day, the chefs head to the iconic LA Coliseum. IIRC, the word "iconic" was bandied about a lot this week. It may even been used correctly. As they cook, the judges (including Nilou Motamed in place of lookalike Gail Simmons and both Nakayamas) arrive with athletes like gymnast Nastia Liukin and beach volleyball player Kerri Walsh Jennings. Bryan serves his scallop crudo dish first to many compliments. Malarkey, Karen, Melissa, and Gregory have all done something displeasing, be it a lack of acid or seasoning or an errant bit of crab shell. Stephanie is then roundly praised for her panna cotta served in a lemon.

Back in the kitchen, Padma announces that the unanimous winner of the challenge is Stephanie. Surprise! After Bryan looks sad, they tell him that they also loved his dish, which seems to mollify the loss. The two of of them are told to stand to the side as the remaining four chefs are scolded for their mistakes. Malarkey's celery root overwhelmed his dish. Karen's duck was unevenly cut and the skin should have been crisp. Melissa's chawanmushi was delicious but there were bits of shell. And Gregory's dish was a festival of bland.

You can probably tell that I ran out of steam while writing about the Quickfire. I think that happens every week. Please let me know if you want me to cut the narrative there and add more to the Elimination section of the recap. I might not do it, but at least I know.

Karen is out. Time to face Kevin (and apparently everyone else left) in Last Chance Kitchen.