Welcome back, faithful readers (all three of you)! I have watched another episode of Top Chef and toiled over a fabulously decently almost kinda entertaining recap to keep your mind off of the shit going on in the world, if only for five minutes. Nobody will get sick in our little Top Chef world, and more importantly, nobody will die. Though some people might not cook too well, and someone will definitely be eliminated.

Before I begin, I'd love to get to know you a little better. After all, you're reading my writing, and I have no idea who you are. Well, I know John and Dave and Lara. Wait, that's all three of you! Never mind then.... 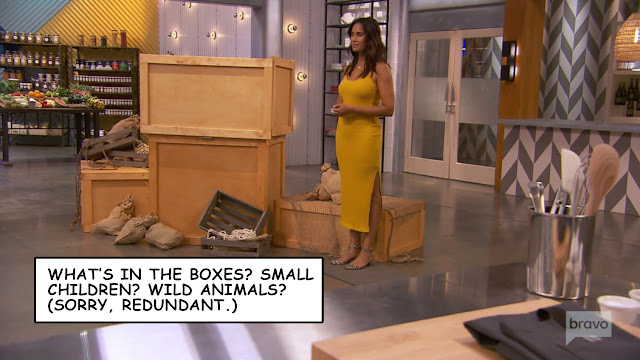 Let us proceed then to the Top Chef Kitchen, where Padma is wearing a skin-tight yellow dress, looking like a giant and very exotic banana with boobs, and standing near an imposing pile of wooden crates. Before she introduces the Quickfire Challenge, she mentions Last Chance kitchen. If you remember--that is, if you haven't done so much covid-era boozing that you still have brain cells left--Tom whipped on his chef's coat after the Elimination Challenge last week and declared the immediate start of Last Chance Kitchen. All of the previously eliminated chefs entered the room at that time, I guess to fake out those folks at home who aren't watching the web series. Nini and Karen, who were victims of a double elimination, must face both each other and current LCK winner, Lisa, and make a well-balanced sweet and salty dish. Nini comes out on top, which forces Lisa out. There is then a second battle between Nini and Karen, in which they make a "family meal" style dish. Karen is the winner of that challenge, which puts her back into the main Top Chef competition. Nini remains behind to battle the next eliminated chef. All of this to say that Padma brings out Karen to join the other chefs; last week's "double elimination" was actually only a complicated single elimination. 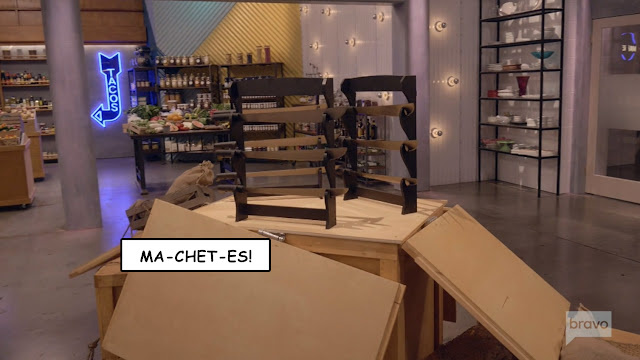 Padma then introduces the guest judge for the Quickfire--actor Danny Trejo, who happens to love food and cooking and who owns three locations of Trejo's Tacos and one of Trejo's Coffee & Donuts. The cheftestants must create a perfect taco to appease Danny so he doesn't go all Machete on them.. But here's the catch: the only cutting implement they can use is....can we get some dramatic music please! Dun dun DUN! The top create is opened to reveal machetes, one for each chef. Duh. You forgot about those crates already, didn't you?

Cheftestants do the usual scurrying/elbowing each other out of the way thing to grab ingredients. For some odd reason, everyone but two chefs grab fish as their protein. Yuk. Honestly, I've only ever eaten one fish taco that I've enjoyed, and that was the skate taco at Mission Cantina in NYC. I find them to be bland and uninteresting. If you like 'em, that's fine. I prefer pretty much any other meat (except chicken, which is usually either dry and flavorless or just flavorless). The exceptions are Kevin, who makes a spin on al pastor. Instead of pineapple, he uses bananas, no doubt inspired by Padma. He also uses store-bought tortillas, while everyone else seems to be making their own. It's all rather ambitious for a typical 30-minute Quickfire, and Kevin's no dummy. Stephanie apparently isn't either. She sees everyone else going for fish so she grabs some ground lamb. Now, she's never made a lamb taco, but how hard can it be? At least she doesn't have to mince it with her machete. 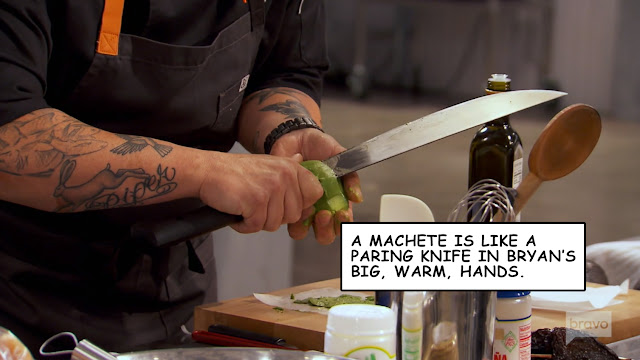 Speaking of machetes, some folks are having a little difficulty using the giant knife. Meanwhile, Bryan is doing fancy French knife cuts. He's slicing an avocado in wafer-thin slices like it's nothing. I have no doubt that with more time he'd tourne potatoes and brunoise onions, too. 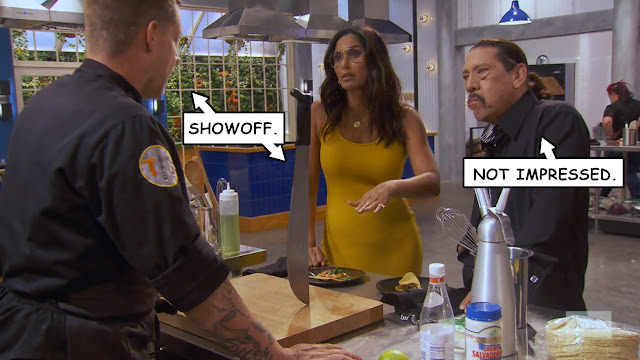 Time is over and Gregory can barely get his clumsy handmade tortilla filled with fish and odd dried chile salsa before Padma and Danny come over to taste. Not only is his tortilla a mess, his taco is just too salty. Lee Ann's battered fish taco has a cheese-crusted tortilla, which Trejo enjoys. Eric fills his tortilla with what looks to be a mere tablespoon of his rockfish and chorizo concoction, and that's no bueno. Padma and Danny continue to bob their heads and grimace at each chef in turn, enthusiastic over Karen's vaguely Korean-esque fish taco and loving Stephanie's rebellious lamb creation. Surprisingly, Stephanie, who has never won anything ever (in her season, she was eliminated in a dastardly and completely unnecessary pre-competition competition) gets the nod and the last immunity of the season.

Whew. That seemed like a lot of words, huh? I'm tired of typing. I think I am going to find a snack. No! Not a liquid one! It's only 10:40am, for shit's sake! Honestly, we've been eating mostly healthy food over the last 7 weeks, and while we're drinking alcohol, we're not drinking more than 3-4 times per week and never more than one drink. I tell you, we're angels. Except for the amounts of pizza I've been putting away. Hey - I'm supporting local, non-chain, restaurants!

Ok, back from the snack. Fresh blueberries and pineapple, thank you very much. I love fruit, and it satisfies my mouth full of sweet teeth.

Padma mentions Restaurant Wars, which makes the cheftestants excited. "Restaurant Wars is...next week." Awww... This week, however, they're trying something new. The cheftestants are going to develop their own pitch for a restaurant, with mood boards and dishes to be presented to the judges. 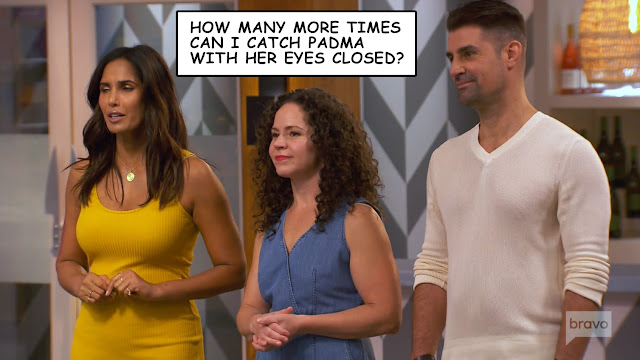 Speaking of judges, this week's special guest is Top Chef Season 4 winner Stephanie Izard and restaurateur Kevin Boehm. They've opened many successful restaurants between them and are uniquely qualified to determine which cheftestant presents the best ideas. Unlike Padma and Gail, who haven't opened restaurants. The two best pitches will be the themes for Restaurant Wars, and the crappiest will send its creator home.

First the chefs need to do some arts and crafts. They head back to the Top Chef Mansion where they find fabric samples, random plates and cutlery (though sadly no machetes), poster paint, stickers, and big tubs of glitter. Within a few minutes, the chefs are beadazzling all of the food in the fridge and fingerpainting the countertops. Well, in my fantasy version they are. In actuality, they are seriously considering their dream restaurant concepts. Except Stephanie, who is a personal chef with no dreams of opening her own place. Kevin, Bryan, and Malarkey are old hands at this, having opened approximately 274 restaurants between them, the vast majority of which belong to Malarkey. For some bizarre reason, many of his restaurants are named after fabrics: Searsucker (sic) was first, followed by Herringbone, Corduroy, Gingham, Burlap, Gabardine, Pleather, Doubleknit, Spandex, Quiana, Kevlar, and Chiengora. 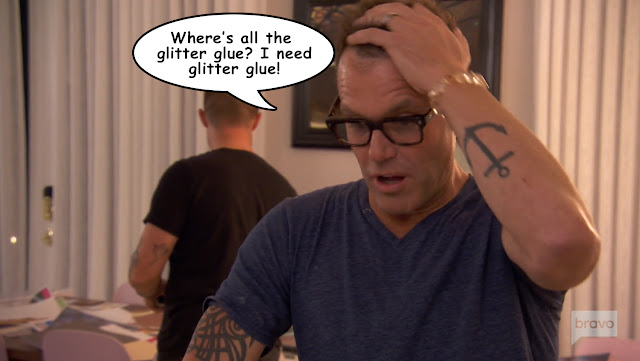 After shopping, the cheftestants get to their cubbies in the TC Kitchen and prepare dishes that would represent those offered in their dream restaurants. While they're cooking, Padma, Tom, Gail, Stephanie, and Kevin Boehm wander through and take their seats at the Altar of Judgement. Tom must have been playing with small children recently, because he states, "look at all the num-nums."

First we see Kevin's restaurant, The Country Captain, named after the famous southern curried chicken dish. He prepared a version of the namesake dish using braised and roasted chicken. The judges all murmur appreciatively. Next up is Eric, who everyone can clearly see is in the weeds and needs help from Bryan and Lee Anne. His concept is called Middle Passage and he seeks to express the African diaspora through food. Sadly, he offers overcooked duck, oversalted broth, and just plain bad technique. Gregory's concept is Kann, after the Haitian name for sugar cane (and pronounced the same way), and he serves oxtail and a whole fish, both of which look amazing. Bryan sets up his board and I can see the concept is Thatcher and the Rye. Immediately I know that it's named after his son, Thatcher. Is it creepy that I know the name of his son? Is it worse that I know he also has two daughters, Piper and Ever? Okay then. He wants the restaurant to be everyday accessible Mid-Atlantic cuisine, but as per usual his food is on the fine dining end of the scale. 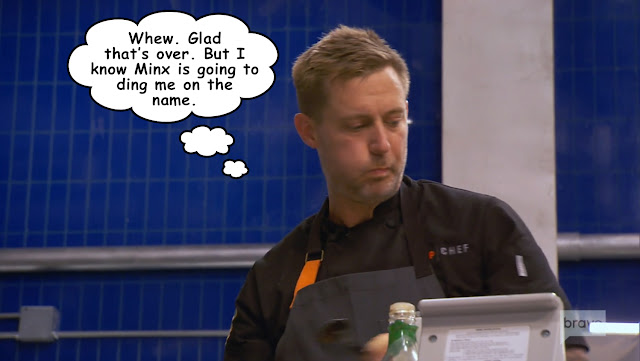 (The book is Catcher IN the Rye, so the name doesn't really work.)

Karen's Three Black Crowes serves modern dim sum, though the judges feel her dishes skew more Italian than Asian. The judges aren't feeling the food at Lee Anne's Hanai Mama--one dish was too salty and the other not seasoned enough. Also what differentiates her concept from other Hawaiian restaurants? (Because there are Hawaiian restaurants everywhere, right?) Stephanie named Lucy C's after her dog, and serves food that she should have just given to the dog like salmon pate and schnitzel. The judges joke that she should have named her place "Immunity," short for "Good Thing I Have Immunity, Otherwise I'd Be Out of Here." Malarkey thought the concept he invented during the Quickfire - Baja Asian street food - would sell well to Millennials. He then reveals that the restaurant is named in honor of Shrek--Donkey and Dragon, or D2. The dude is wacky, but he does have a LOT of ideas. Finally, Melissa serves up Sabrina, named after her grandmother, featuring Modern Asian California cuisine like ahi tuna and corn agnolotti, which the judges agree was the best-crafted dish of the day.

Last week there were two losers, and this week there will be two winners. Malarkey makes it to the top with D2, as does Melissa with Sabrina, but the two concepts that will be going on to next week's Restaurant Week battle are Kevin's Country Captain and Gregory's Kann.

On the bottom are Stephanie, who has immunity and is therefore safe, Lee Anne, and Eric. Neither had a strong concept, and Eric's seemed confused. His food fell short as well, and he was sent to Last Chance Kitchen to battle Nini.

Next week: Considering I mentioned it a few times already in this post, you should already know that it will be Restaurant Wars!