Spotlight On - B & O Brasserie

A high school project that required seeking out mythological iconography in architecture is what originally led me to the B & O Railroad Building in downtown Baltimore. This H-shaped Beaux Arts structure features a larger-than-life-sized figure of Mercury, Roman god of many things including commerce, communication, and travelers. He’s holding the caduceus, a short staff wrapped by two serpents and topped with a pair of wings. You’ve seen it before, as it’s commonly used as a symbol for healthcare. Except that’s wrong. The symbol of medicine is actually the Rod of Asclepius, a staff wrapped by a single snake, no wings. But considering the expense of health care in this country, perhaps the symbol of commerce is more apt these days, huh? But I digress. Mercury and his snakes are hanging out with an allegorical figure called Progress of Industry. Allegedly, there is a locomotive up there with them, but it looks to me like Prog is holding a double-dip ice cream cone. Mercury is definitely looking at the cone, as if thinking, “damn, why won’t he share with me?” 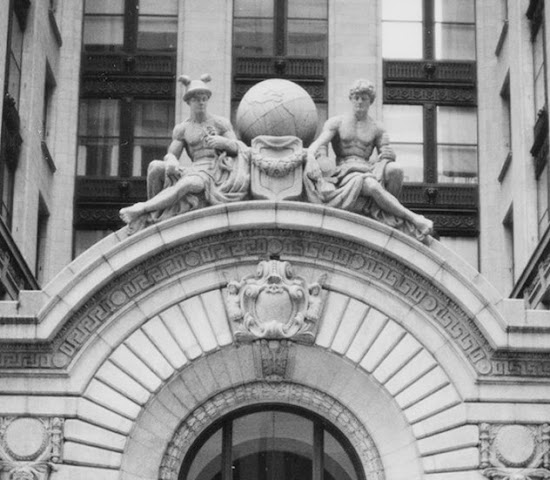 Look up at those figures and tell me I’m wrong. They’re still hovering above what is now the entranceway to the Kimpton Hotel Monaco at 2 North Charles Street.

Thus ends the architecture and mythology tour for the day.

To the right of the hotel entrance, up a few steps, is the doorway to the B & O American Brasserie, the hotel’s restaurant. But it’s not a typical hotel restaurant in that it’s really really great. (My apologies to hotel restaurants everywhere, but you know that some of you are, shall we say, meh.) Just beyond the front door is the restaurant bar, where you will find the cocktail stylings of multi-award-winning Head Bartender Brendan Dorr and his crew. Honestly, I’ve never been disappointed with any of the drinks Mr Dorr has invented, all complex masterpieces. I am a fan of niche (read: expensive) fragrances, and some of Brendan’s concoctions have reminded me of fine perfumes with their intricate combinations of flavors and scents. I love the Galavanter, made with rye, elderflower liqueur, and dry vermouth, and the Cardamom Daiquiri made with apricot-infused rum and cardamom bitters. Oh, there’s wine and beer too, of course, but the cocktails are too good to pass up. 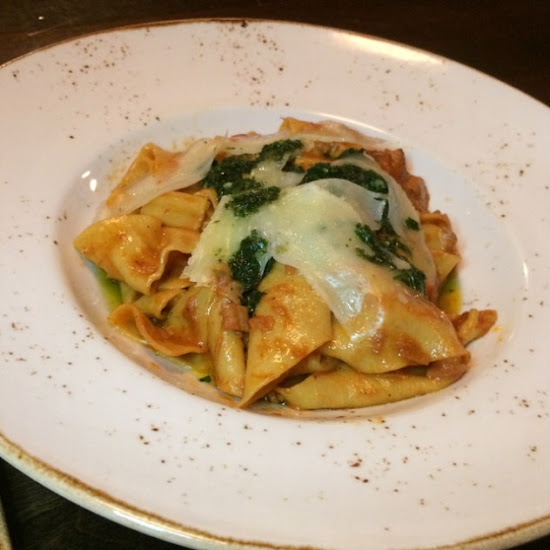 Before you get too distracted by the drinks, take a look at the restaurant menu. The B & O serves breakfast, lunch, and dinner (and brunch on the weekends), but dinner is my favorite. The current Executive Chef is Scott Hines, who took over the kitchen when Michael Ransom went back home to Michigan to open his own restaurant, Ima, in Detroit. (I mention this because I feel Chef Ransom is one to watch.) Hines, like Ransom and the chefs before him, is wildly creative but without being weird. Case in point: he makes a gremolata out of marjoram and orange, rather than the usual parsley and lemon--a traditional accompaniment to osso buco, or braised veal shank. He puts this highly aromatic and somewhat offbeat condiment atop a dish of house-made pappardelle with slow-braised veal sugo and shaved Pecorino pepato. The dish--pappardelle with a tomato-and-meat sauce--is familiar and comforting, but it has the added zing of that rustic, peppery, cheese and the somewhat piney-oregano flavor of marjoram...and orange. Pow!

Another dish I really enjoyed recently was the oxtail marmalade. It’s like rillettes (cooked shredded meat preserved with fat and served as a spread for bread) meets bacon jam (bacon cooked down with brown sugar to a thick condiment for spreading on everything). It is beefy and unctuous, especially when eaten with a little of the bone marrow schmaltz that comes on the side (to mimic the fat topping of rillettes). A garnish of peppercress and pickled shallots adds touches of green and acidic flavors to offset the richness of the dish.

I now want to apologize, as I’m probably being a little mean by going into such detail. After all, the menu at the B & O changes a few times a year, and Chef Hines is likely working away on his Spring menu as I’m writing this. Rest assured, however, that it will be full of similar delights using ingredients of the season, and I cannot wait to taste everything on it.

As much as I love the B & O Brasserie, I do have one negative thing to say about it. However, it will not affect you, Dear Walker, because you are smart enough to be on foot. It’s this: if you linger more than a couple of hours at the restaurant or bar, the valet parking charge is enough to cause stomach (and wallet) upset. Better to park on the street somewhere nearby. Or, just walk.