Pasta, Pizza, and Burgers in NYC

Regular readers of Minxeats know that I love going to New York. I love getting lost in a sea of people who are not like me, people of various ethnic origins speaking languages I do not understand. I love the hubbub, the vibrancy, the museums, the shops, and especially the food. So it's not surprising that the thing I most want to do when I get to New York is eat, even if I am there for Fashion Week.

Earlier in the summer, I received an email invitation to various shows taking place on September 8, 9, and 10. The invite read something to the effect of  "let me know what shows you want to attend, and if you want to bring a guest, let me know that person's name." I invited my friend Daisy to accompany me to two shows on the 8th, both featuring former Project Runway designers.  A couple of weeks before the show I received a confirmation email, and the day before I received another. We were set.

Daisy and I had the day planned out. I would get into the city at my usual 10:45, walk a few blocks from the train station to check into my hotel, then meet her at Eataly downtown by the World Trade Center around 12:30. Only my train was seriously delayed. It got to Baltimore late, and to NY even later, which frustrated me to no end. I like being timely, and this train wasn't playing nice. I ended up meeting Daisy only 45 minutes later than planned, but the delay killed my good mood and made me a real crank for pretty much the whole day.

I hadn't been downtown to the WTC site since 2002, and a lot has changed. I managed to locate Daisy in the Oculus--a fucking huge shopping mall and transportation hub--without too much trouble, and from there we walked. We had an agenda: eating, Eataly, perfume sniffing, more eating, fashion, more eating, more fashion, possibly more eating.

We started off at Eataly, Mario Batali's Italian-themed food court/market. Lunch was at Le Stagioni where we were briefly tempted by the prix fixe menu before deciding we didn't need multiple courses at that point in the day. Daisy ordered the hamachi crudo with sea beans, lemon, and lots of Sicilian EVOO. There were also pomegranate seeds that added an intriguing tangy-sweet crunch. A side order of rosemary fried fingerling potatoes was lovely and crisp. 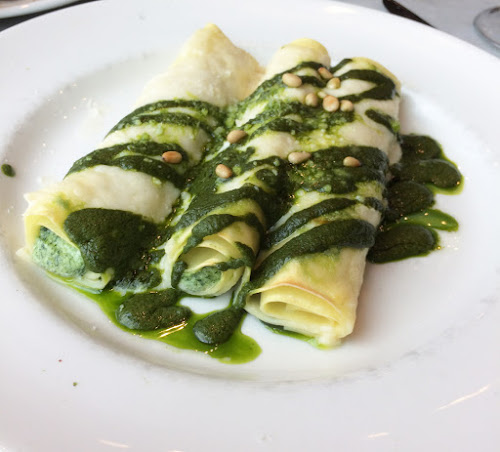 I ordered the cannelloni con pesto, because it's rare to see cannelloni on a menu in Baltimore, and they are one of my favorite pasta dishes. Stuffed with spinach and ricotta and topped with bechamel, pesto, and pine nuts, they were light yet filling and full of intoxicating fresh basil flavor. Quite delicious. We each also had a glass of delicious Bastianich Vini Orsone Sauvignon Blanc that I wouldn't mind drinking on a regular basis.

We then wandered to the Hermes boutique to smell their latest fragrance, Twilly, which was a complete bore. We also hit the Penhaligon's shop and the new Saks Fifth Avenue. Unlike the Saks uptown, this one was quiet and uncluttered, which allowed us ample room for chatting and sniffing. We spent quite a bit of time at the L'Artisan Parfumeur/Penhaligon's counter, despite having been to the stand-alone Penhaligon's store. The sales associate was very knowledgeable about both lines, so we were quite surprised she had been repping Penhaligon's for only 3 days at that point. We didn't buy anything, but may have fallen in love with a couple of scents before we left.

Wandering around such a large space as the Oculus takes up time, so we made the executive decision to skip the first show, scheduled for 6pm, and have a snack instead. I had wanted to go to Uncle Boon's, in NoLiTa, but it was packed, with a line out the door. I was still a bit grumpy from this morning and was not in the mood for a line. At this point my feet and knees ached. Also my back, because I was carrying several pounds of dry pasta around--a gift for Mr Minx. There are tons of places to eat in NoLiTa, though grumpy people just want to be grumpy. Daisy knew the perfect antidote: pizza and beer at Pomodoro. 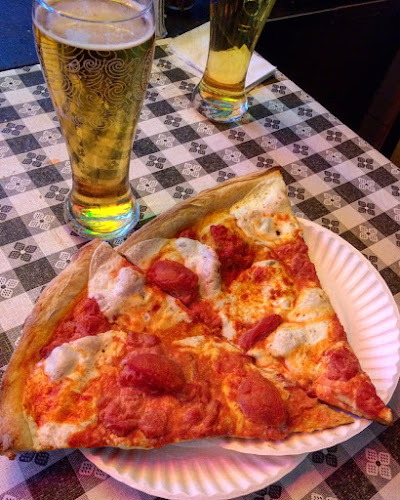 We each had a vodka slice, which was perfect. Sweet tomatoes, crisp crust, the perfect amount of cheese. I guzzled a Stella, which was refreshing. Also, I was very thirsty.

After a trip to my hotel to change, we walked over a couple of blocks to the 9pm show. Despite the exchange of emails, they didn't have us on their "list" for a seat, so we stood. That was fine, even though my feet were screaming at that point. Afterwards, it was time for more food. Daisy thought the NoMad bar a few blocks away would be a good choice. The restaurant had a 45 minute wait, and the bar only 15, so I suppose it was. However, places like that--all hard surfaces, tons of trendy young people yelling at each other to be heard over the din of other young people yelling at each other to be heard over the din--are not my scene. I'm old. I like carpeting and padded banquets and quiet. Especially the quiet. If there is a hell, mine would be a room full of fashionable and drunk Millennials discussing the work week while hipster bartenders blend $18 cocktails that are mostly ice. In other words, the NoMad Bar. 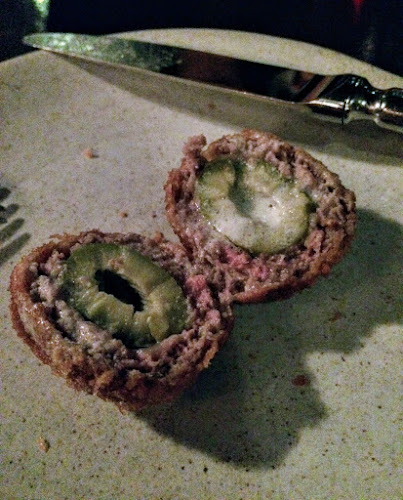 That said, the food was fine, and we even got to sit upstairs somewhat away from the loudest of the noise. We started our meal with Scotch olives, which are like Scotch eggs, but much smaller and more expensive. The olives were stuffed with a sheep's milk cheese and covered with a layer of lamb sausage. They were pretty damn good, and I found an olive to be preferable to a boiled egg. 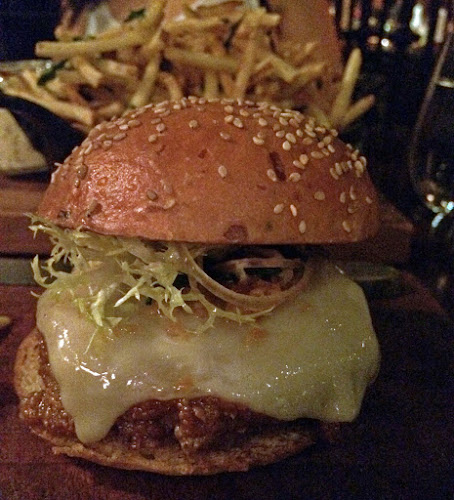 We both ordered the chicken burger. I normally wouldn't do such a thing because I find poultry burgers to be dry and uninteresting but our waitress was emphatic about the deliciousness of this particular sandwich. She said the chicken breast was ground, mixed with foie gras, and packed into its own skin before being fried and topped with black truffle mayo. It was indeed very juicy and quite good. We ordered a side of fries to go with. They were nice and crisp, but they didn't bowl me over.

For dessert we had the "cookies and cream." I didn't include a photograph because in the dark restaurant they looked like a bowl of turds. They're not much for garnishing at NoMad Bar--the olives were four small turds in a bowl, and the dessert was a larger version of the same. Thank jebus it all tasted really good. I suppose when one is drinking a $35 cocktail for two that is served in a giant brass rooster or a $14 beer, you're not really there for the food. The cookies and cream were quenelles of ice cream that had been coated in a thick Oreo cookie-like crumb that was miraculously crispy. I normally skip restaurant desserts because they are often too heavy, but this was just right, and perfect for sharing. 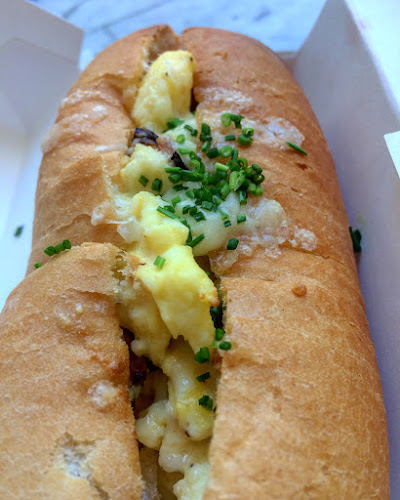 I had an early train to catch the next morning so for breakfast I strolled up 5th Ave to Maison Kayser for a scrambled egg and bacon sandwich in a dried- out top-split bun. It looked better than it tasted. 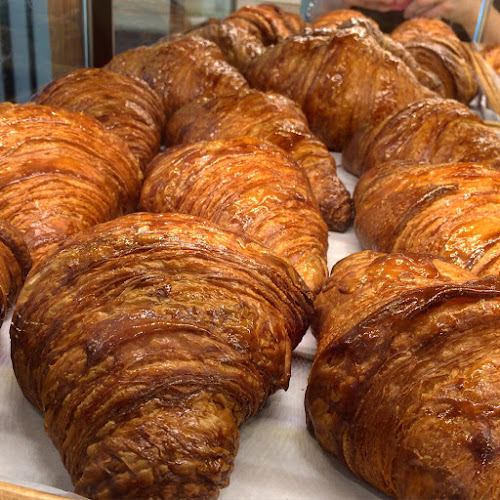 But these croissants from Paris Baguette, right next door to my hotel, were as crunchy and lovely as they appear. I bought several of them to take home and enjoyed one on the train about halfway through the ride. 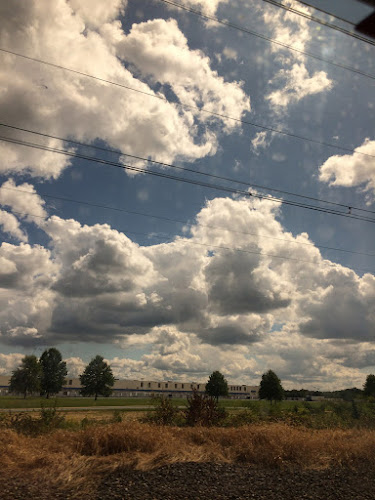 This time, the train was right on time, which put me in a much better mood. Also the clouds were amazing. Take out that ugly building (which is probably a jail) and the power lines from the photo above and that's a great shot, no?

A shout-out to Daisy at CoolCookStyle for putting up with me. She is a gem.