In November of 2012, Chef Kevin Perry and his wife Cecilia Benalcazar opened Liv2Eat to high praise from local foodies and restaurant critics, even winning the 2013 “Best New Restaurant” award from the Baltimore City Paper. In just a few short years, Perry and Benalcazar shuttered their restaurant....but only briefly. They opened a few weeks later, in August 2017, as In Bloom, a joint effort with new partners Chef Cyrus Keefer and Angela Keefer. Chefs Perry and Keefer had worked together at Sotto Sopra, a popular Italian restaurant north of downtown in an area known as Cathedral Hill. Keefer had been looking to open his own place for a few years now, and thought the partnership with Perry made sense for both of them. Though the adage “too many cooks spoil the soup” comes to mind, it certainly will not be true at In Bloom, where Keefer and Perry will essentially be cooking every meal themselves.

The restaurant itself got a bit of a face-lift--not that it especially needed it--in the form of fresh paint and new lights for the patio. I’ve always thought it was a pretty space, not fussy, with nice details like the inlaid pebbles on the bar and the aluminum chairs, both of which are still around. 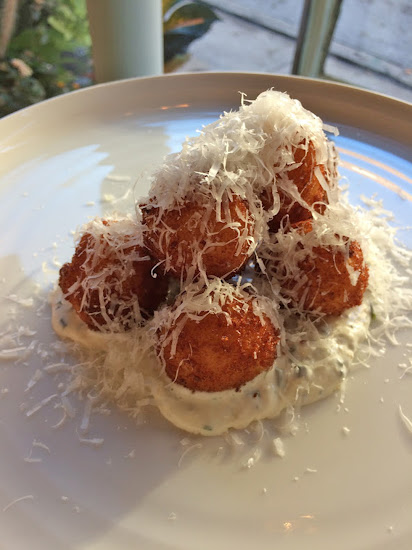 When the restaurant was known as Liv2Eat, the menu was short and to the point. At In Bloom, it still has a welcome brevity, but incorporates more of a melting pot sensibility to go with its established seasonal focus. On a recent visit, the menu showed the influence of both chefs. Chef Perry’s fabulous risotto fritters, wee crispy clouds of creamy rice served with lemon chive creme fraiche and shavings of Parmesan, were a highlight of our meal. 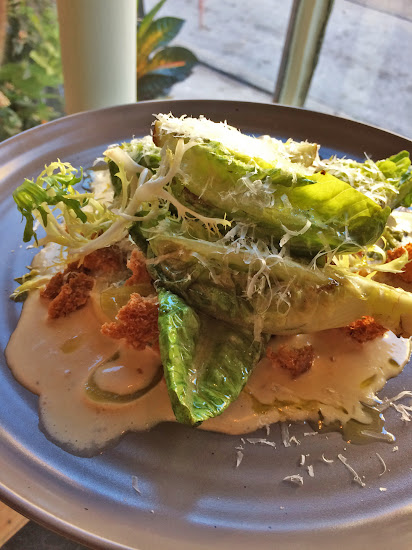 We also tried the gem lettuce Caesar with caramelized lemon and toasted bits of torn bread. The dressing was presented on the bottom of the plate so diners can use as much or as little of it as they like. 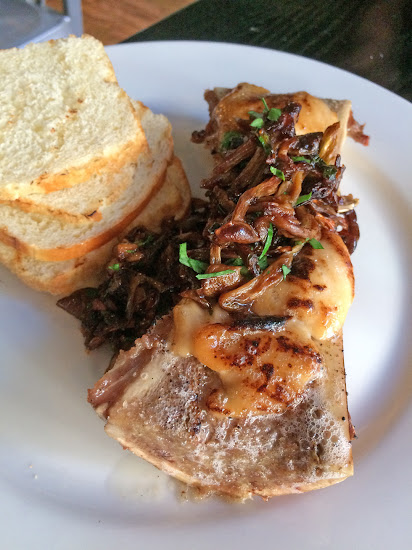 The roasted bone marrow is a rich concoction involving frizzled mushrooms and artichokes and a slick of aioli. The accompanying toasts are not only for topping with marrow, but also for mopping up the luscious fat that has dribbled all over the plate.

Chef Keefer makes some of the most tender calamari you’ll ever eat, and we’ve enjoyed it at various of his other gigs. Currently at In Bloom, it’s served with Thai basil, chili, and pinenuts; doubtless that combo will change with the seasons. Both chefs’ enjoyment of rustic Italian food shows in dishes like the ultra-light potato gnocchi in a rich gorgonzola cream sauce with hazelnuts (inspired by a recent trip to Italy), and the eggplant caponata. 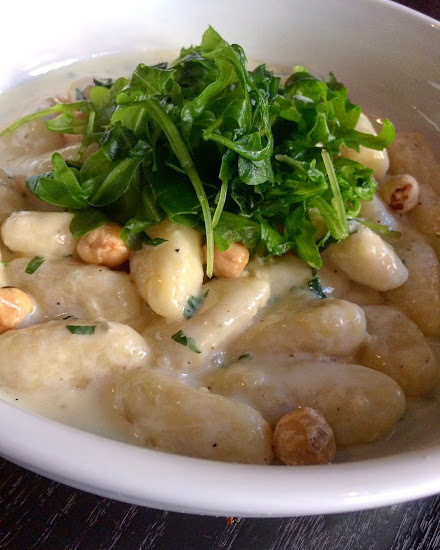 One thing that struck me about the food at In Bloom is that while some dishes definitely swing toward the fine dining end of the spectrum, other items, particularly among the entrees, seem far more casual. The bacon burger, made with local Roseda beef, is a riff on a classic fast food burger, stacking two 4-ounce patties with bacon and cheddar and adding a sauce more “fancy” than “special.” Though a beef kabob sandwich with peppers, mushrooms, and garlic sauce sounds like street fare, it’s been elevated to sit-down status with a pillowy pita made from brioche dough, cooked to order. 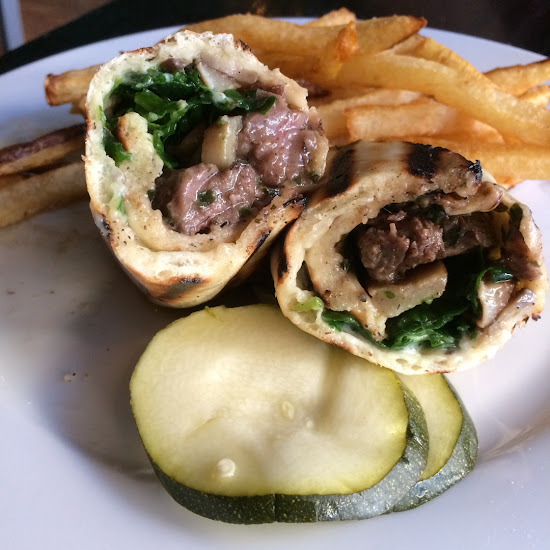 For those folks more interested in knife-and-fork food, there’s also an elegant airline breast of chicken stuffed with a truffled chicken mousse. Because it’s Baltimore, crab cakes are on the menu from time to time. Currently, they’re Chef Keefer’s creation, a completely gluten-free cake bound with shrimp mousse. (Chef Perry makes some dynamite traditional crab cakes, too, which hopefully will pop up in the future.) . This mix of casual and somewhat more formal dishes should help make In Bloom a neighborhood staple as well as destination dining.

While there is a bar in the space, In Bloom only serves wine and beer. The handful of cocktails they serve are wine-based, like the Bamboo Mule, which gets its kick from sake. But the wine list is so interesting, who needs cocktails? I enjoyed a glass of the bright and sweet Pamplemousse Rose, a rosé with a strong grapefruit aroma and flavor that is all the rage in France. I followed that with a glass of Maui Blanc, a 100% pineapple wine that’s weird and slightly funky and delicious all at the same time. There are flights available for those who can’t make up their minds about which wine to try first. 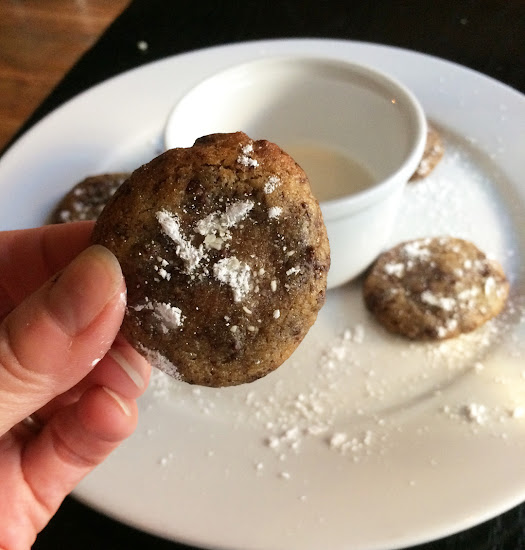 There are desserts too, my favorite being the plate of warm, fresh-from-the-oven, chocolate chip cookies presented with a ramekin of cream for dunking. The cookies are small, making them the perfect size for the end of a meal.