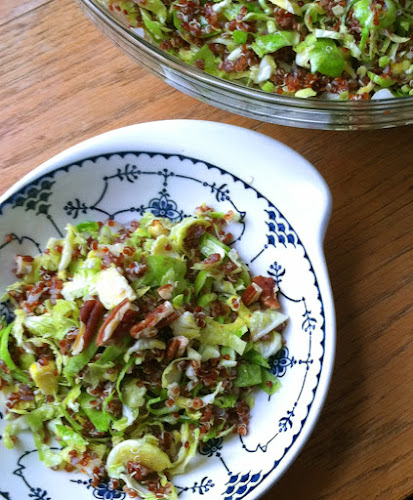 It sometimes takes me a while to read all of my food magazines. In 2015, I received four per month, which was kinda ridiculous. I'm still working on them, but I did manage to get through the December 2015 issue of Martha Stewart Living. In it was a recipe, in a section titled "Eat Clean," for a salad made with brussels sprouts, Meyer lemon, and quinoa. It sounded tasty enough, and we had all three of those things on hand. We didn't have two of the supporting players, scallions and walnuts, but I figured I could make do with sweet onions and pecans.

I never realized that "clean" was synonymous for "flavorless." Quinoa is bland and raw brussels sprouts are pretty mild. Meyer lemon has a lot of flavor, but not quite enough to tackle the plainness of the grain. And lemon + salt + red pepper is just kinda meh, even when combined with some fancy extra virgin Greek olive oil. I felt the salad needed some sweetness, for balance. I added a chopped apple, and then, because I have a sweet tooth, a little maple syrup to echo that maple-y quality that pecans have. It was better, but as we were eating it, I thought it could use some creaminess, in the form of diced avocado. And maybe some chopped parsley and even more lemon zest.

Clean, shmean. I'm all about flavor.

Place quinoa in a pot with 2 cups of water and a pinch of salt. Bring to a boil, reduce heat to a simmer, and cook, covered, until water has been absorbed, 15 minutes. Allow to cool to room temperature.

Trim the stem end of the brussels sprouts and pull off the outermost leaves. Cut sprouts in half, then make a v-shaped cut in the core end to remove as much of the core as possible. Slice the sprout halves thinly (the magazine suggests using a mandoline, but nobody wants human blood and skin in a vegan dish, not even a carnivore) and place in a large bowl. Peel and core the apple. Chop the fruit fairly finely and toss with the apple.

Zest the lemon; add zest to sprouts and apple. Juice the lemon to produce 2 tablespoons. Whisk in the olive oil, maple syrup if using, and pepper.

Add the cooled quinoa to the bowl of sprouts. Season with 3/4 teaspoon of salt and drizzle on the dressing. Toss well to combine. Stir in pecans before serving. Eat immediately, or refrigerate up to three days.