On the Hunt for Good Chinese Food in Baltimore County

When we were growing up, there was a Chinatown of sorts in downtown Baltimore. A good handful of restaurants dotted the area around Park Avenue and Mulberry Street, including Mee Jun Lo, which was a family favorite. In the 80s, we had some pretty terrific "Szechuan" restaurants in the City, including Szechuan in Federal Hill, Bamboo House at Harborplace, and Uncle Lee's on Greenmount Avenue. Theminx's family frequented all three on a pretty regular basis.

Today, we live in the county. There seems to be a tiny Chinese carry-out in every shopping center, but are any of them good? Szechuan House, up in Lutherville, used to be pretty good. There are still folks who dine there regularly, but it's been a while since we've had a good meal there. Normally, we order delivery, and food arrives impressively fast and somehow the spring rolls are always crisp. But, dishes like orange chicken and General Tso's are gloppy and uninspired. And they cannot do a good kung pao chicken or moo shu pork to save their lives. We've tried several times, and been disappointed each time. The moo shu, in particular, offends. For some unknown reason, the smell of it reminds me of the elephant cage at the Zoo. But kung pao and moo shu pork are among our favorite American-Chinese dishes, so we needed to find someplace that made them well. Well enough to suit us, that is.

We started our search at Lucky Inn, in the North Plaza Shopping Center. We weren't sure if the stereotypical lantern-bedecked decor was a good or bad thing, but we persevered and ordered.

We tried their won ton soup and the eggrolls to start. The soup was tasty, but there was something very commercial, from-a-can-ish, about it. The eggrolls were inedible, at best. They smelled funky and tasted worse. Not quite freezer-burned, just horrible.

I had the General Tso's. The all white meat chicken was moist, with a light tempura-like batter, but there was far too much sauce, which was sweet and not spicy. I prefer dark meat, and some spice, but it wasn't horrible.

The kung pao chicken had big chunks of green pepper (ugh), and was somewhat spicy, but I didn't think it had any other flavor.

The fried rice, which accompanied both dishes, was pretty good. Decently greasy, as it should be.

Not a complete failure, but probably not worth a return trip. 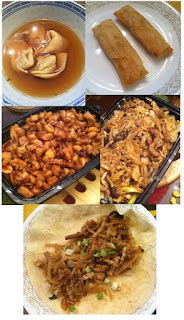 We then tried OrderUp for the first time. We'd eaten food from Towson Best in the past, and remembered that it had been decent.

Their won ton soup wasn't bad. The broth was nicely gingery, and the won tons were plump, but there was a dearth of roast pork pieces and scallions.

The Mandarin-style spring rolls were a joke. They were tiny and flat, as if whomever made them forgot to add any filling. Oddly enough, they did taste pretty good.

The kung pao was all chicken and peanuts, with a mild spiciness. Overall, pretty darn good (no green pepper was a huge plus).

My moo shu pork had a generous amount of pork and tasted good. The pancakes were a little thick though, almost tortilla-like. 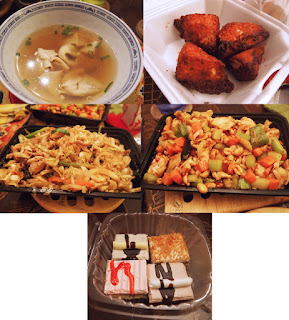 Our next OrderUp order came from China Wok. There are myriad China Woks in the area; this one was on York Road in Towson.

The won ton soup was really nice. The broth was well-seasoned with a light body and nice flavors. The won tons themselves were not only stuffed with the typical gingery ground pork mixture, but also small pieces of pork.

The egg roll was meh, neither good nor bad. We added on an order of shrimp toast, which was an expensive disaster. It was burnt and lacking seasoning.

The kung po chicken
was a little atypical in that it contained tons of veggies like baby corn, carrots, green pepper, and celery. The sauce was a bit spicy, and a little salty. The chicken breast meat was sliced rather than diced, and it was extremely tender.

The moo shu pork was also a little salty, but otherwise quite good, with a generous amount of pork. The five pancakes were thinner than those from Towson Best. They were generous with the plum sauce, giving us two containers of that, but only one small container of rice.

As a bonus, we got dessert: four small pieces of sponge cakes in four flavors--coffee; chocolate; vanilla with strawberry frosting; vanilla with coconut frosting. Unexpected and pretty good.

Three down, many others to go... Stay tuned for more posts in the future.