Be One Korean BBQ

We are carnivores, so we love us some Korean BBQ. We've been going to Honey Pig, which we like a lot, but sometimes we don't want to get on the beltway and eat in another county. So we looked to Baltimore City for a solution. There's a Koreatown of sorts in Station North around Maryland Ave/21st Street with several notable restaurants like Nak Won, Nam Kang, and Joung Kak. We decided to skip the tried and true and try the new-ish BeOne, in the little shopping center on Maryland between 20th and 21st. And with that we found our new favorite Korean BBQ joint.

We went for a few kinds of meat including bulgogi and pork neck. The bulgogi was scrumptious, tender and lightly fatty, with lots of sweet and garlicky flavor. The pork neck was a completely different animal (obviously), unseasoned and chewy. It's not for everyone. 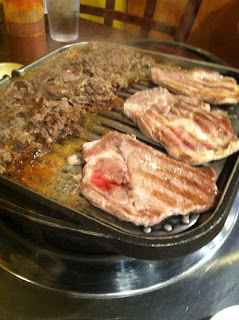 We also had a pork and squid combo, and boneless kalbi (short rib). Squid gets a little tough on the grill, so again, it's not for everyone. 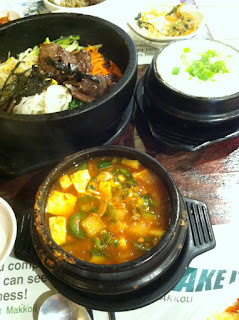 We also had the dolsot bibimbop (the one in the hot stone bowl) and couldn't resist the seafood pancake. And while we enjoyed the bulgogi the most of the BBQ items, the pancake was the best thing on the table. Huge, packed full of octopus, and super crispy, we couldn't stop eating it. Of course, we're all pigs and managed to eat pretty much everything on the table, including most of the large bowl of tofu soup, the eggs, and all of the various bowls of pickles and whatnot (panchan) that comes with. Among the panchan dishes we enjoyed the most was a rather horseradishy kimchi, and thin strips of fish cake in a spicy sauce. Hell, it was all good.

Service was pretty good, too, but the place wasn't at all busy on that particular Saturday afternoon, so YMMV. Be One didn't have the hustle-bustle that Honey Pig has, so we felt a bit more relaxed while we enjoyed our food. So, to sum up - food great, service pretty good, and we didn't have to drive to Howard County. Win. Win. Win.