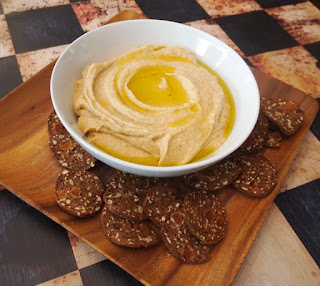 Once again the end of the month showed up and that meant another stitch-n-bitch get-together with friends. Regular Minxeats readers know that I like to make both something dippy and something sweet for the ladies. Dippy, because it keeps the hands relatively clean, and knitters need clean hands. Sweet, because we all seem to have a sweet tooth.

This month's dippy component was homemade hummus, as it often is. I wanted to try something really different this time and leave out the beans completely. I had a bag of parsnips without a purpose in the fridge, so decided to use them. They were already hummus-hued, so why not?

It's best to par-cook the parsnips until they are quite soft, so the food processor doesn't have a hard time breaking them down (especially if  you use a Cuisinart mini-prep, like me). Parnips are denser and dryer than beans, so you'll need to use a bit of water to help in the processing, as well.

The resulting texture is much smoother than a hummus made with beans, but the flavor was somehow quite hummus-y. I was too lazy to cut up vegetables so I served it with Wild California brand Twice Baked Apricot Ginger Crisps. I had picked up a bag at the fancy food show in July and was waiting for the perfect occasion to serve them. Parsnip hummus seemed to be it. The light sweetness of the crisps worked well with the light sweetness of the hummus. The chips are also quite nice on their own, or eaten with cheese. If you've tried the Trader Joe's brand of crackers with fruit bits in them, then you already have an idea of what the Wild California ones are like.

This recipe makes about 1 1/2 cups of hummus. We put a dent in it, but we absolutely demolished the bag of crisps.

Peel the parsnips and cut into chunks. Put into a saucepan with water to cover. Bring to a boil over medium-high heat and cook until parsnips are very tender, about 20 minutes. Drain parsnips, but reserve some of the cooking water.

Allow parsnips to cool to room temperature and put them into the bowl of a food processor with a few tablespoons of cooking water and a glug of olive oil. Process to a fairly smooth texture, adding a few more spoonsful of water or olive oil, if needed, to move things along. The consistency should be thick, not runny. Add the almond butter and process until completely incorporated. Season with a fair amount of lemon juice, plus garlic powder and cumin to taste (start with 1/2 teaspoon each). Salt and pepper, of course, also to taste, and if you want a bit of heat, add a bit of harissa powder or cayenne.

Scrape into a bowl and drizzle on some olive oil. Serve with crudite of your choice, crackers, pita, whatever.