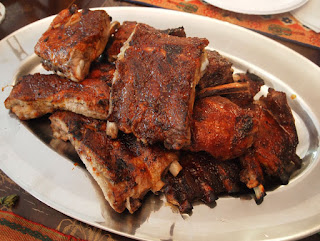 Yum yum - don't those look delicious?  And they were. The general recipe for these ribs came from Bryan Voltaggio's new book, Home: Recipes to Cook with Family and Friends. It's a very nice book with lots of interesting and not overly-complicated recipes (quite a change from the very chef-fy VOLT ink, his book with brother Michael). This recipe is so simple, in fact, there are only five ingredients: pork spareribs, kimchi, Dr Pepper, ketchup, and scallions.

The recipe is written for a pressure cooker, but since not everyone has one of those hanging around the house, there are also directions for baking the ribs. Rather than the 15 mins for a pressure cooker, oven cooking takes 3 hours at 300°F. For both versions, the ribs, soda, and kimchi are dumped into the cooking vessel. Simple, right?

The recipe's instructions are pretty simple, too. Once the ribs are cooked, the cooking liquid is poured off, the kimchi reserved and kept warm in a separate pot. The liquid should be cooked down with the addition of 1/4 cup of ketchup, to make a glaze. The ribs are then browned on a grill, glazed with the sauce, and served with the kimchi on the side. Easy, peasy. Except....

I don't know how much liquid comes off of the ribs in a pressure cooker, but the oven method produces well over a quart of various pork juices and fat. And I didn't even use the recommended amount of kimchi. The recipe calls for two 30-ounce jars. That's 3 3/4 POUNDS of kimchi. My supermarket had only two 16-ounce jars; I thought that was plenty. There's no mention of salt in the recipe; I'm guessing the massive amount of kimchi was going to supply that element, so I salted the ribs before cooking them. Now what to do with all of that liquid, which tasted nice and porky, with a light cabbag-y element that reminded me of my Polish grandmother's cooking. I decided to keep a cup of it, which I defatted with ice cubes. I didn't think a mere 1/4 cup of ketchup would make much impact, so I upped it to 1/2 cup, added a bit more Dr Pepper, plus 2 tablespoons of brown sugar, and, because the kimchi is a Korean thing, a heaping tablespoon of gochujang. I also tossed in an entire bunch of scallions, chopped. After this sauce boiled for a few minutes to a nice thick consistency, I gave the scallions a whiz with a hand blender to make a chunky sauce redolent of meat, sweet, and heat.

Rather than firing up our charcoal grill for about 10 minutes of cooking, I put the ribs under the broiler, instead. Browned them on both sides first, then brushed them with my sauce for a final broil. The result was pretty delicious. There was no obviously Korean flavoring to them, despite the kimchi and gochujang. Perhaps if I had added a bit of sesame oil and a bunch of garlic to the sauce, but I didn't want to risk burning the oil during broiling. Yuck. The cooked kimchi itself had lost a lot of its oomph, but was still tasty. I had been slightly skeptical that the ribs would come out with much flavor at all, being that they hadn't been dry-rubbed the day before, but they had absorbed a good deal of the kimchi's garlic flavor.

I think that if I make this recipe again, I'd do it with baby backs, which are far less-fatty and easier to work with, since they are so much smaller and don't require any trimming. I'd use my tried-and-true Alton Brown method of dry-rubbing and foil-wrapping the ribs the day before, except instead of a dry rub, I'd puree the kimchi with some of the Dr Pepper to make a paste and allow the ribs to marinate in that overnight before adding more soda for the final cooking. Will let you know how that goes if and when it happens.

In the meantime, I have to figure out what to do with a pint of leftover cooked kimchi.