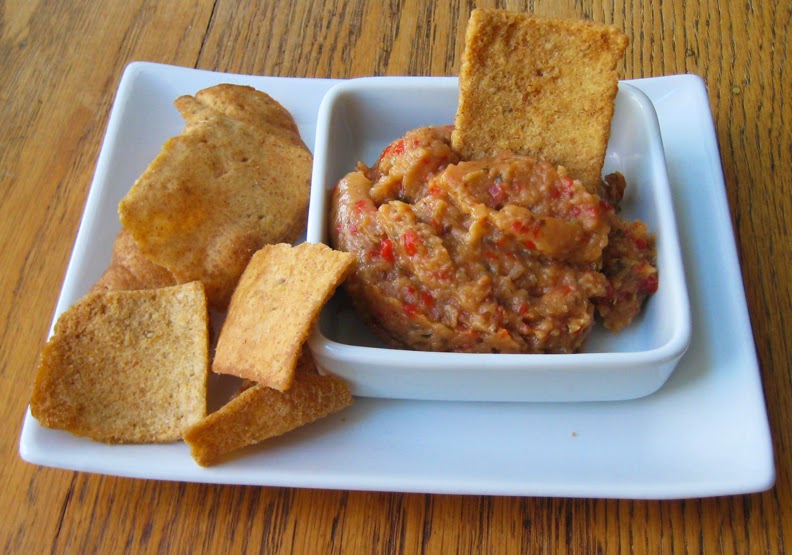 Once a month I hold a stitch-n-bitch in my living room. If you don't know what a stitch-n-bitch is, it's a gathering of knitters/crocheters/other fabric-crafty people that involves working on projects and chatting. And often, wine. My gatherings always include food, both savory and sweet. Who doesn't like a little nibble in the afternoon? The biggest concern is that the food be neat to eat. Nobody wants to have messy fingers while crafting, and I'd prefer folks not drop stuff on the floor or sofa. (Yes, we have a dog, but he's very polite.) I usually end up making a thick dip that more often than not includes eggplant. Why eggplant? Because it's easy, tasty, and thick. I can pick up a big glob of it on the end of a pita chip and shove it in my mouth in between stitches without missing a beat or getting messy.

Though the meetings are only once a month, I don't think my guests want to eat the same babaganoush or hummus every time, so I mix things up. Like I said, eggplant is easy, and it certainly takes on flavors well. I had half a preserved lemon in the fridge that I wanted to get rid of so I could use the jar for a fresh batch and decided to use that as a starting point for flavoring. I added a bit of this and a bit of that until the dip had a balance of tart and sweet flavors with a little nip of heat.

If you don't have preserved lemons on hand, use the juice and finely grated zest of half a lemon.

Preheat oven to 400°F. Cut eggplant in half lengthwise and place cut-side-down on a baking sheet. Bake for 20-30 minutes, until soft and collapsed. (Or...skip the oven and cook in the microwave for 8-10 minutes.) Set aside until cool enough to handle.

When eggplant is cool, scrape out the flesh and put it in the bowl of a food processor along with the lemon, cilantro, garlic, red pepper, and a glug of olive oil. Pulse to a puree. Season with agave syrup, a big pinch of salt, and as much cayenne as you care to add.

Enjoy with crudites and pita chips or fresh pita triangles. Also tasty stuffed into a pita with some baby greens and more roasted red pepper. Feta, too, if you have it.