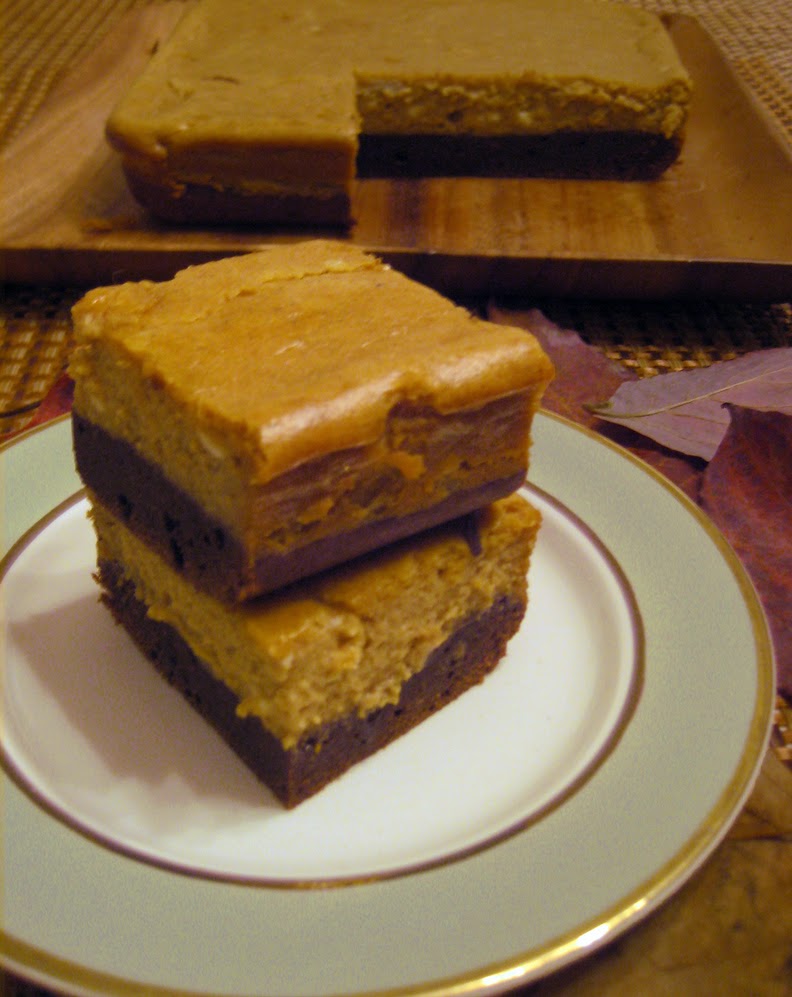 When fall hits, pumpkin becomes the most popular flavor. Everywhere you look there's pumpkin bread, pumpkin yogurt, pumpkin everything. Let's not forget pumpkin spice lattes, which have their own, not-so-flattering, meme. 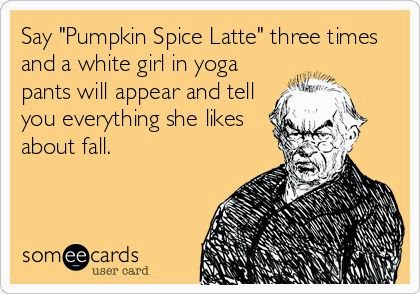 As a typical white girl, I love pumpkin and fall (yoga pants not so much), but especially pumpkin pie and pumpkin cheesecake. Recently, I was in a cheesecake mood, but didn't want to fuss with making a whole big thing. Not that making a cheesecake is difficult, but we don't need to have one of those evil things in the fridge, calling our names. A creamy cheesecake flavored with pumpkin and spices sings a siren's song, for sure.

I like making brownies and I love eating them, so figured combining pumpkin cheesecake with a brownie could be a perfect thing. This despite my thinking that I really don't like the combination of pumpkin and chocolate. Years and years ago I made a pumpkin pie that had a layer of chocolate on the bottom. It was awful. The chocolate was too dark and competed with the spices in the pumpkin. I can still taste it, and cringe a little. Can't remember where I found that recipe, but I'm pretty sure this was pre-Internet.

This time, I did consult the Internet for a pumpkin cheesecake brownie recipe, but all of the ones I found involved swirling the cheesecake batter into the chocolate batter. That's not cheesecake-y enough for my taste. Why not simply layer the two elements? The cheesecake batter would be lighter than the brownie batter, and should float nicely on top without sinking down into it. But I wasn't sure if the combination of elements would require two bakings--bake the brownie first, add the cheese, and bake again. Overbaked or burnt brownies would be bad, so it all went into the pan at the same time, for one baking. And it worked! The brownie made a nice crust for the fluffy and light cheesecake element. It wasn't too chocolately (yes, there is such a thing), and the cheesecake wasn't too spicy. It was just right.

So, ladies, I present to you the perfect treat: pumpkin AND chocolate. You're welcome.

Line 8" or 9" baking pan with two long sheets of parchment, placed parallel to each other. Let long ends hang over the pan, to use as handles later. Spray with a bit of release spray.

Melt the butter and chocolate in a sauce pan. Stir in the sugar until well combined and remove from the heat. Add the pumpkin and cinnamon and mix well. Beat in the eggs, one at a time, then stir in the flour and salt.

Pour the brownie batter into the prepared baking pan, smoothing out the top.

Combine cream cheese, sugar, and butter in a mixer until very creamy. Beat in egg, milk, pumpkin, flour, vanilla, and spices. Pour over brownie base.

Bake for 40-45 minutes, until cheesecake is puffed and no longer jiggly or wet-looking (the center may be very slightly wobbly). Allow to cool completely on a wire rack. Lift brownie from pan with parchment handles and slide onto a serving plate. Cut into bars. Store covered in the fridge.