Chef Neill Howell won the Mason Dixon Master Chef Tournament in 2013, when he was working at Bond Street Social. I managed to snag the restaurant for a slot in our cookbook, Baltimore Chef's Table, but chef Howell had other plans. When he left Bond Street Social to open his own place, I transferred his info to a sidebar. Sadly, that sidebar was cut by our ruthless editor (along with a bunch of other stuff). Yes, Neill, I am apologizing again.

Turns out, change is good. Although he's not in the book, he is cooking up a storm at the Corner Pantry, a Balto-British cafe in Lake Falls Village. Recently, Mr Minx and I were invited to a media dinner hosted by chef Howell and his wife, Emily. 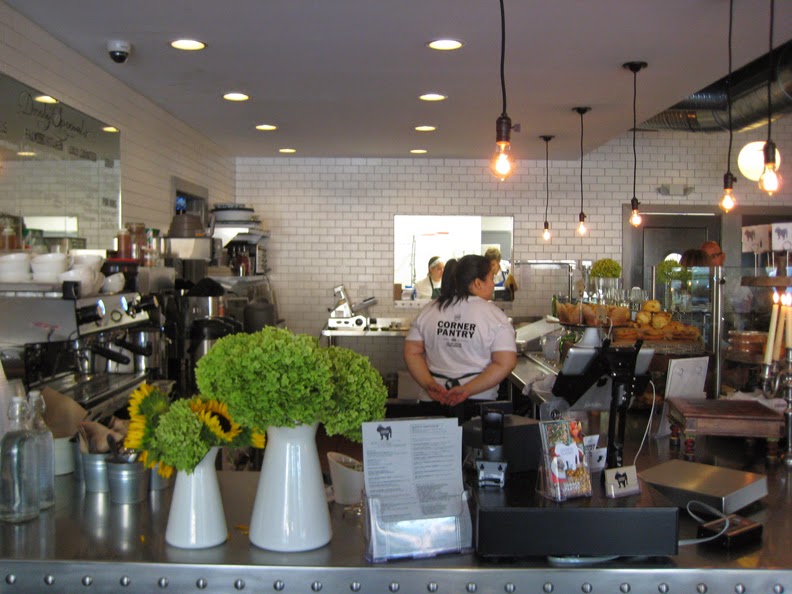 The Corner Pantry is located in the spot that used to house Banksy's. Gone are the faux-Burberry wall decorations; they've been replaced by fresh white subway tile and a large stainless counter atop which sit the day's wares. The first thing one notices is the pastries made by pastry chef, Julie Sutula: scones; crumpets; pop tarts; cookies, muffins; biscuits; and even Cornish pasties (a meat pie). Next to that is the cold counter, which holds the day's selection of salads and proteins. For $10.99 a pound, customers can load up on goodies like salmon, kimchi soba noodle salad, rice and cauliflower salad, etc., to eat there or to take home. A variety of breakfast and lunch sandwiches are also available, plus a few other dishes from the kitchen.

We were served items from both the cafe and the catering menu. It was quite a lovely spread, and I'm betting chef Neill and Emily do a bang-up job with catering. The crab and corn fritter, which we were served as a passed app, was delightful. Scrummy, as they say across the pond.

On the table were plates of Sutula's moist biscuits, which were hard to stop eating with a dollop of Chef Neill's tomato bacon jam.

We started dinner in earnest with the Ploughman's board. Typically, a ploughman's lunch includes bread, cheese, and a thick brown vinegary chutney-like stuff called Branston pickle. After having a particularly constipating one in England in the 80s, simply hearing the word "ploughman," saddens me. But the ploughman's at Corner Pantry is a delight of tangy, toasty, and meaty elements. We were served tender ham hock, some toasted raisin spelt bread, a dollop of goat's cheese, a wee Scotch quail egg, and a bowl of piccalilli relish.

The main course was served family style and included the restaurant's popular kimchi soba noodle salad. We're big fans of soba, our noodle of choice for cold salads. Chef Neill's was spicy and garlicky and so good we came back for more a couple days later.

Another dish off the catering menu is lamb kofte lollipops, which were served with a buttermilk tahini dressing. The kofte, elongated meatballs of Middle Eastern origin, were moist and redolent of cumin. (We also snagged a couple more of these when we came back for a repeat visit on the weekend.)

The roasted peach salad included local peaches and Big City farms greens (which are also available for purchase in the grab-and-go case at the back of the restaurant) along with red onions--a delicious combination of ingredients for a simple tossed salad.

We also tasted rockfish, simply roasted and served with lemon. This is something that would typically be a featured protein on the cold counter, like the roasted salmon that was available recently. Simple but very good. There was also a side dish of lemony rainbow chard (not pictured) that I could not stop eating.

We also took home a selection of the Corner Pantry's baked goods, all of which were uniformly delicious and made a fine breakfast the next morning.

Just a couple days later, I decided I didn't want to cook dinner. We don't live far from the Corner Pantry, so we popped in for some carry-out, which included roast salmon, kimchi soba salad, kofte, and a crab cake, which was one of the week's kitchen specials. And I must say...it was very special.

Made with Maryland crab meat, this baby was almost all meat. I didn't notice any filler at all, and the seasoning had a lovely lemon flavor. Chef Neill may be from the UK, but it seems that his soul is firmly in Baltimore. I highly recommend this crab cake, so be sure to give it a try if it's available!

We recommend everything at the Corner Pantry, actually, and are happy that we finally had a chance to get there. We hope to become regulars. :)