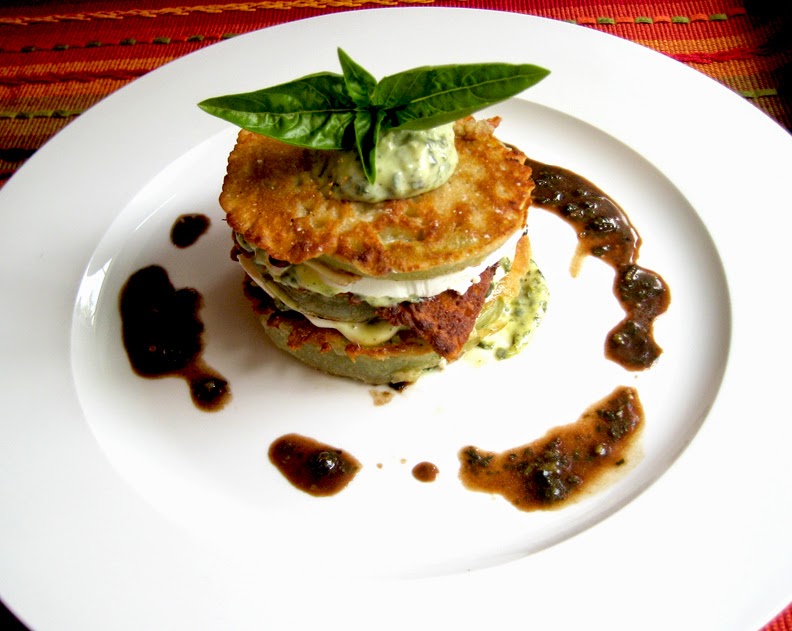 Once again our garden is inundated with tomatoes. Green tomatoes. The few that have started to turn red have been attacked by a plague of squirrels. Those furry little bastards take one bite of the reddest, ripest tomato and then leave the rest of it on the vine. If they're going to eat it, I'd rather them take the whole damn thing and save me the disappointment of finding tiny toothmarks in the side of one of my beautiful Black Krims.

(Our next door neighbor told us a funny story about squirrels in our tomatoes. He said he watched one of the critters climb down into the garden, take a tomato, and fling himself skyward onto a branch. He then proceeded to smack directly into a tree trunk and fall flat on his back. With the tomato still in his jaws. He eventually picked himself up and ran off. With the tomato.)

I can't wait for the tomatoes to ripen, so I picked a bunch of green ones. The most obvious thing to do with green tomatoes is to fry them, but I hate the whole messy plate of flour-bowl of egg-plate of breadcrumbs routine and then having to clean up all of the flour and breadcrumbs that inevitably drop onto the floor between the counter and the garbage can. So I thought I could batter the tomatoes, instead of crumb them. I did some googling and found a couple recipes, all of which involved frying in at least half an inch of oil. F that. If pancakes can cook in a haze of PAM, then batter-dipped fried green tomatoes can, too.

Ok, so I didn't use PAM. I used vegetable oil. But only about a tablespoon-full in my big 12" skillet. And see from the photos how purty and brown they turned out?

I thought I'd make a cornmeal batter, but the bag I thought contained cornmeal actually had oat flour in it. Next to it in the pantry was a bag of rice flour, and seeing the two of them together made me flash back to the truly awful gluten-free donuts I made some months ago. I almost sat down and cried again right on the spot; instead I put on my big-girl panties (yes, right there in the kitchen) and took a deep breath. I didn't really want to reach up to get the big heavy barrel of flour off the top of the cabinet, so I used the oat flour and rice flour, bad memories and all, since they were in my hands. Yes, I am lazy, but that makes this recipe gluten-free. And honestly, I couldn't tell that I didn't use wheat flour. (You can use wheat flour, if you're not as lazy as I am.) I kinda didn't want to use milk for the batter, but using beer would have defeated the whole gluten-free thing, and the closest thing to club soda I had on hand would have been some diet raspberry fizzy water. Milk it is, then.

I bought some Buitoni pesto because our basil is really kind of lame this year. Originally I was going to use straight pesto, but I like a mayo-based sauce with my fried green tomatoes. Then I thought mayo and cheese together? Maybe that will be too rich. As if there's any such thing as too rich. So I made a vinaigrette, too, with pesto in it, and a pinch of sugar for balance. (I didn't use oil because pesto already has oil in it.)

What I liked best about this dish was that the hot tomatoes made the cheese melt. It had all the right things going on - crusty, creamy, gooey, tangy, herbaceous, and fried. Mmm. 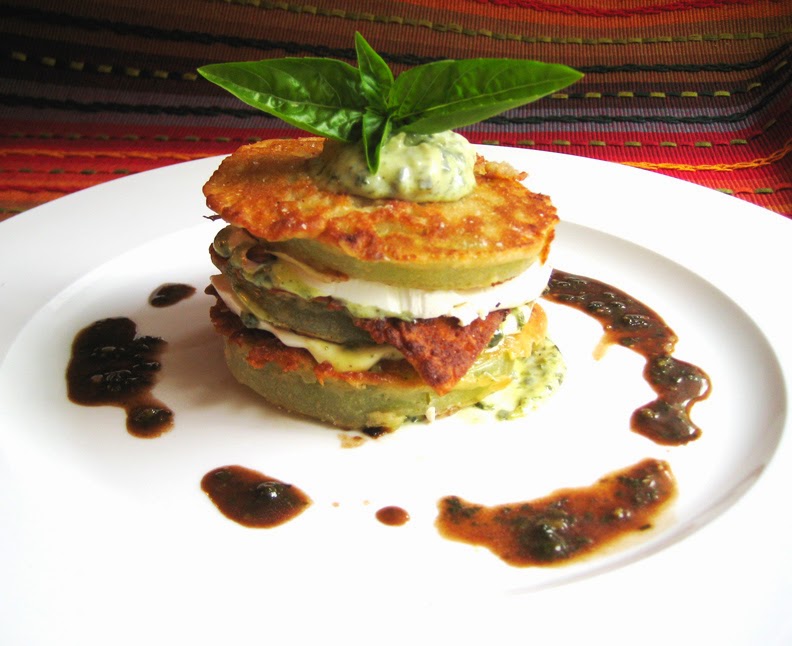 To make the tomatoes: Combine batter ingredients in a large bowl.

Heat a large skillet over medium-high heat and add 1 tablespoon of oil. Swirl the pan so the bottom is coated.

Put several tomato slices into the bowl of batter, turning them with a fork to make sure they are well coated. Using the fork, lift slices and allow some of the batter to drain back into the bowl before putting them into the hot pan. Don't crowd the pan - just put 5-6 slices in per batch.

Cook tomatoes until bottoms are nicely browned. Flip slices and cook an additional few minutes until the other side is brown. Remove to paper towel-lined plates to drain and give them a dusting of salt. Cook remaining tomatoes the same way, adding more oil to the pan for each batch.

To make the pesto mayo: Combine the ingredients in a small bowl.

To make the pesto vinaigrette: Combine the ingredients in a small bowl.

To assemble dish: Place a small blob of the mayo in the center of a plate. Top with a slice of tomato, then a slice of cheese and another blob of mayo. Repeat once more, then finish with a third tomato slice and a blob of mayo. Garnish with fresh basil. Drizzle the vinaigrette around the stack.