"Ananda" is a word that means "bliss" in Sanskrit and other Indian languages. It's also a pretty good word to describe the meal that Mr Minx and I had recently during a media dinner at Ananda, a new restaurant in Maple Lawn by the folks who gave us the Ambassador Dining Room. While their usual menu comprises many of the Punjabi-style dishes that are familiar to most of us (tandoori dishes, biryani, bengan bartha, bhunas, naan), we were served a selection of special seasonal offerings, some of which had a fusion aspect.

We started our party in the bar, sampling the restaurant's tasty house beverages, like the Mumbai Mule, made with a light but still quite peppery ginger beer, and a cosmo made with goji berries. The decor at Ananda borrows heavily from the old-world ambiance of the Ambassador, and even has a spacious terrace area with garage doors and a corner fireplace that will come into play during the colder months. For right now, it's a perfect spot to enjoy an elegant, yet exotic, meal.

We started off with a couple of appetizers. One was a moist lamb meatball version of classic seekh kabab...
...and the other was wee crab cakes with local corn and toasted mustard seeds, one for each of us. Both were a delicious way to start off the meal, but I did prefer the lamb meatballs. They were the most "Indian" in flavor, which I hoped was a harbinger for the rest of the meal.

That was not to be the case. Instead of the usual collection of richly-sauced family-style dishes, we each received our own beautifully-plated servings. Haute cuisine with Indian flavors, if you will.

The first of our individually-plated courses consisted of a giant shrimp, prepared tandoori style, and served with the restaurant's mint, mango, and avocado chutney. The chutney, both spicy and fresh, was the highlight of this dish. It's also available on its own. They should sell it by the jar.

After the shrimp, we received a bowl containing chunks of spiced pear chutney. It looked a bit sparse until Bindi Singh, one of the restaurant's owners, poured over a soup of summer squash and carrot. Billed on the menu as a classic dish from the foothills of the Himalayas, the soup was served cold. The chilled soup spoons were a thoughtful touch. 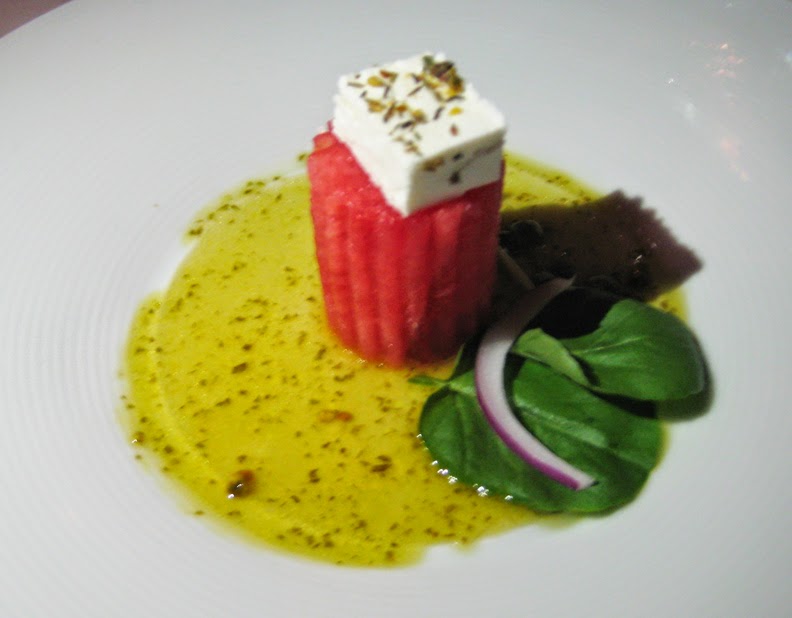 A palate-cleansing salad of locally-grown watermelon, Breezy Willow Farm feta, watercress, onion, and pistachio came next. I loved the way the sweet watermelon absorbed some of the tangy dressing, a combination of lime, chile, mint, olive oil, and white balsamic vinegar.

Our entree was a nice slab of well-cooked halibut, dressed with sesame, soy, and tamarind, served with grilled leek and both red potatoes and basmati rice. The sauce, which did not seem typical at all, was inspired by Tibetan cooking experienced by the owners on trips to Dharamshala, northern Indian home of the Dalai Lama.

Finally, we were served a dessert of peach and strawberry crisp topped with a wee scoop of cardamom ice cream. Despite being full, I ate every bite and wished for more ice cream.

Ananda is a bit of a haul from Baltimore, and not exactly easy to find, despite being in a stand-alone building on Maple Lawn's main drag. There's no signage (as yet), so look for the street number on the side of the building (7421). There's plenty of parking in the back. It's definitely worth the trip to try the restaurant's seasonal menu as well as more traditional offerings. However, if you don't want to make the drive to Howard County, Ananda's sister restaurant, the Ambassador Dining Room in the Tuscany-Canterbury neighborhood of Baltimore City, is there to satisfy your Indian food cravings