Did you know that if you use Open Table to make reservations, you can earn free food? Yes, if you make (and keep!) enough reservations and save up the points earned, eventually you can cash them in for a "dining cheque." So, armed with a cheque for one hundred smackaroos, Mr Minx and I went to Cinghiale, the Italian-flavored restaurant in the multi-ethnic restaurant empire belonging to Baltimore restaurateurs Cindy Wolf and Tony Foreman.

I made the earliest reservation possible, 5:30pm, because I get off work at 4 and am downtown anyway. Yes, I sacrificed myself by staying for an additional hour just to be able to eat at Cinghiale. It may or may not have been worth it.

We arrived at the restaurant about four minutes early and were asked to wait in the bar. Soon enough we were whisked to a table in the front corner of the empty restaurant. Another couple waiting with us got seated at the very next, so close it was practically adjacent, table. Huge empty restaurant, and they put the two couples eating early right next to each other. The woman at that other table was so loud, hell, they might as well have given us a four-top.

Anyhoo, lets ignore them for a few minutes, as if that's possible.

A bit of advice. If your server asks if you've eaten at Cinghiale before, say yes, otherwise he or she will start a seemingly endless spiel about how the menu works. There are two prix fixe options, a rustic 3-course with limited choices and a larger and fancier 4-course version, both of which are spelled out very clearly (and in different colors) on the menu. I wasn't sure whether to laugh or cry at our server's pronunciation, which was only made worse by her Valley Girl-esque delivery. Eventually, she left us alone with the menu. As we perused it, another server brought over a basket of bread and poured puddles of olive oil onto our bread plates. I think a single saucer of oil for the table would have been a better idea. The oil was so raw and bitter, we rejected it after one taste and had to balance our bread on the rim of our plates to avoid the stuff. As it turns out, the bread itself--a rustic Italian and another with bacon and dried cherries--was delicious on its own. Come on--bacon bread. What's not to love?

After we ordered and before we received our first course, we learned that the couple sitting at the next table were vegetarians who fancied themselves as wine snobs. (They may not have appreciated the bacon bread.) She nattered on about trivial things for much of the duration of our meal. He didn't say much at all, and when he did, it was in much quieter tones than hers. I figured they were probably on their second or third date. 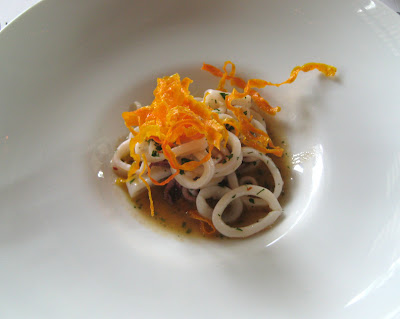 After what seemed like an endless wait, although it was probably five minutes, we received our first courses. I had chosen the grilled calamari with crispy carrots. The plate smelled offputtingly fishy when it was set in front of me, but the calamari tasted fine. It was very tender, and the broth was lightly spicy. The carrots were a nice idea, but had an off flavor, either from having been cooked in old oil, or too far in advance. 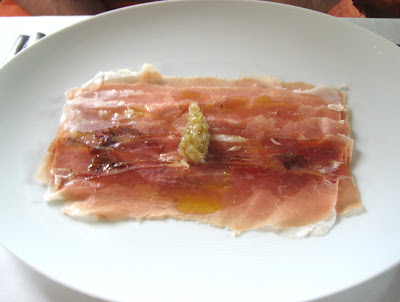 Mr Minx ordered the speck, a cured and cold-smoked ham from the northeast of Italy. The thinly sliced porky goodness was served with a tiny bit of delicious fennel mostarda. More mostarda, please. 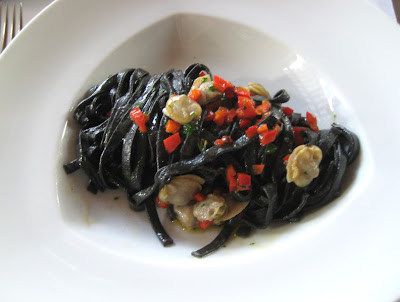 We had opted for the fancy four-course "prezzo fisso" option, so our second course was pasta. I ordered the tagliolini neri with Virginia clams, aglio i olio, and pepperoncini. Black pasta can be pretty sexy stuff, with its faint taste of the sea, and doesn't need to be sauced heavily. The little black dress of pasta. Mine was in a light broth flavored with finely diced pepper and teeny tiny clams. The pasta was perfectly cooked, with a pronounced egg flavor that overwhelmed any briny squid-inkiness, but the clams were lovely. Optimally, the dish would have a pinch more seasoning, but alas, the kitchen knows the diner's palate better than the diner and does not provide salt and pepper on the table. 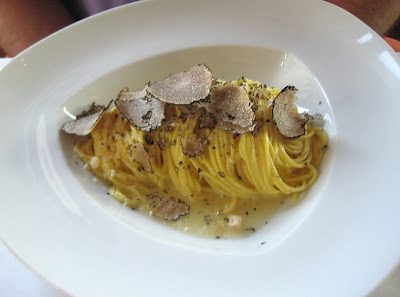 Mr Minx's simple spaghetti alla chitarra with Umbrian summer truffles was amply seasoned and tasted of expensive butter. However, the truffles were wan and flavorless and not worth the $6 supplement (which worked out to about $1.20 per whisper-thin slice).

Meanwhile, the woman at the next table liked the vinaigrette on her asparagus A LOT. And whee...look! Her red wine is a different color than his red wine! And if she can't see Andrea Bocelli in Tuscany, she'll settle for seeing him at the MGM Grand in Las Vegas. Life's hard like that sometimes. (Heaven forbid that she be forced to see him at the Verizon Center.) 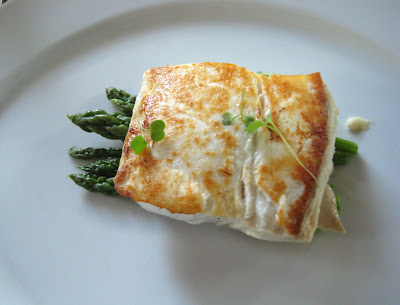 After that brief interlude of inanity, our entrées arrived. I had the pan-roasted halibut, which was served simply with local asparagus and a saffron hollandaise, which I requested on the side. Why bother to put a nice sear on a piece of fish if you're only going to drown it in a heavy sauce? I detected no saffron, but the fish was so moist and perfectly cooked, it didn't need the sauce at all. 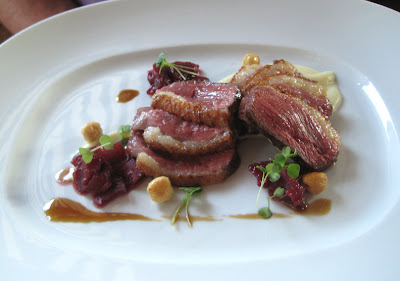 Mr Minx's grilled magret of duck was cooked medium rare, which necessitated the use of a steak knife. I feel that most restaurants are so obsessed with the internal temperature of duck that they ignore the elephant in the room - the fat. So while the center was pink from edge to edge, there was still an ample ring of fat. At least the skin seemed a bit crisp, and it was very well seasoned. The rhubarb marmellata on the side was a nice idea, but the vinegar and fruit didn't marry particularly well.

At this point in our meal, we find out that our female dining companion the loud and increasingly drunk chick at the next table really enjoys watching Master Chef and Hell's Kitchen. OOh! And their red wines are the same color this time! Thanks for the update. 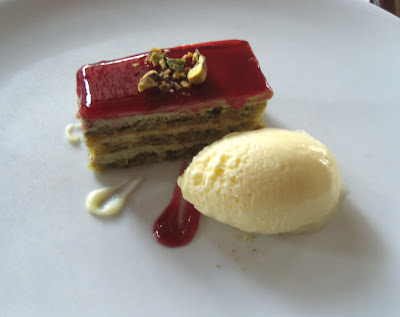 Finally, dessert. I chose the pistachio torta with white chocolate and cherry. The torta was very dense and rich and I would have loved more of the tart-ish cherry, which got lost in all the butterfat. In fact, a quenelle of cherry sorbet might have been a better accompaniment than the white chocolate gelato, which brought back unpleasant memories of a cheap white chocolate Easter bunny I received in my youth. (I never did forgive that aunt.) 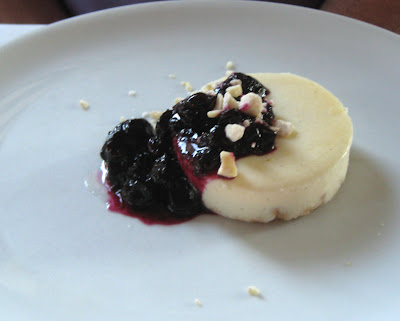 Mr Minx's mascarpone cheesecake with amaretti crust and local blueberries was near perfect, however. Sweet, dense, and smooth, it, too, could have benefitted from more tartness in the berries, but was otherwise pretty terrific.

By this point in the evening, Mrs Wine Snob (turns out they were celebrating a wedding anniversary) was completely blotto and practically yelling about how much she enjoyed the meal. What started out as amusing had finally taken me past the point of being annoyed, and I was eager to pay the tab and hit the road. I was especially pleased that the tab was so low, thanks to that Open Table cheque.