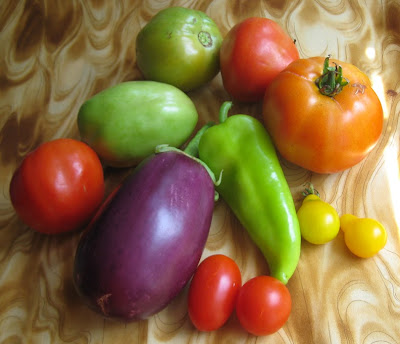 We planted our first in-the-ground garden this summer. Well, it's a raised bed, but it's not our usual container garden. Besides a plethora of tomatoes, we put in eggplant, jalapeno and frying peppers, green beans, zucchini, cucumbers, okra, collards, brussels sprouts, strawberries, and nasturtiums. While the plants are flowering like crazy, we've gotten only one eggplant and four cucumbers--surprisingly, not a single zucchini--thus far. And tons of tomatoes.

So what to do with one eggplant, one frying pepper, and some tomatoes? We happened to have celery and onion in the fridge, and eggplant + celery = caponata. Caponata is an Italian vegetable dish with an agrodolce flavor that comes from vinegar and sugar. We had those, too. 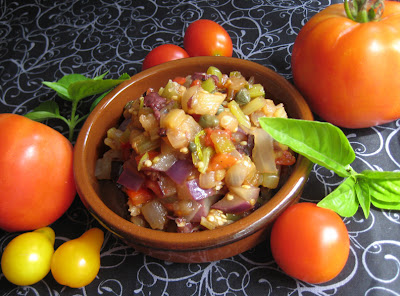 Though the eggplant was fairly small (fist-sized), combined with the other vegetables, it produced a overflowing cup full of sweet and sour relish. While the stuff would have been great on toasted bread, bruschetta-style, I decided to serve it over some mahi mahi. Any other mild while fish would work, too. 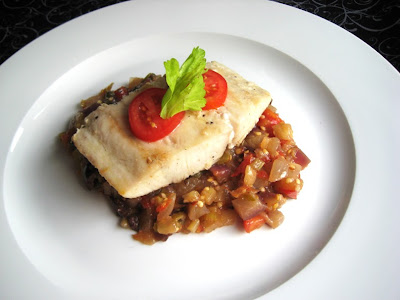 Heat a sauté pan and add a couple tablespoons of olive oil. Add the onion and a pinch of salt. Cook over medium heat, stirring occasionally, for about 6-8 minutes, until onion is soft and translucent and starting to brown a little on the edges. Add the celery, pepper, and garlic, and cook another 4-5 minutes, until vegetables start to soften. Add the eggplant and red pepper flakes next, and cook for about 7-10 minutes more, until the eggplant is tender. Add more olive oil at this point if the eggplant starts to stick to the pan.

Stir in the capers, olives, brown sugar, and vinegar. Add the tomato and season with salt and pepper to taste. Cook another minute or so more, just to warm up the tomato. Remove from heat and allow to cool to room temperature.