Pimiento cheese sounds like a mistake from the Kraft labs, doesn't it? Like some pinkish-orange paste that would come in a little jar in the dairy case. Something my mother would have regarded with near disgust had I indicated that perhaps she buy a jar (despite her own love for Velveeta), you know, just to try it. Like I had to try lima beans before I decided that I loathe them.

Oh wait, pimiento cheese does come in a little jar in the dairy case. Lookee there!

What exactly is a pimiento anyway (and why doesn't anyone pronounce the second "i" - pih-mee-ento)? They're the red thingies in green olives, right? That taste just like roasted bell peppers? Ah - they are peppers, but a cultivar also known as a cherry pepper, and not your standard bell pepper. But why mash them up with cheese and mayonnaise? That seems a little cruel, to both the pepper and the cheese.

...and I've just offended scores of Southerners with my ignorance. I may live south of the Mason-Dixon line, but I am a yankee at heart. (Notice I spelled that with a lower-case "y" so as not to be confused as a fan of a particular New York sports team, which I am most definitely not.)

I must admit I've always been a leetle, tiny, weensy bit curious about pimiento cheese, but I've never tried it. That is, not until Richard Blais' cookbook, Try This at Home, came into my life. In it, he offers a recipe for a decidedly non-traditional pimiento cheese with jalapenos, poblanos, and nary a pimiento to be found. 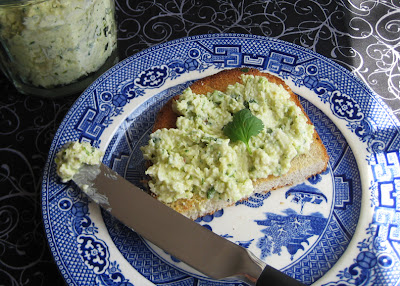 The white cheese + the green peppers makes a pretty Spring-like color combination that reminds me more of egg salad than of pimiento cheese. And the addition of cilantro and lime takes the flavor profile in a westerly direction, so the result is more Austin than Atlanta. But - cheesilicious. And, if you think about it, I still haven't tried pimiento cheese, at least not the authentic stuff.

I used Kewpie mayo; if you do, too, omit the salt. Also, I didn't like the texture at first - it was like cheese salad. Food processor to the rescue!

Combine the cheese, chiles, mayo, cilantro, lime zest and juice, and salt. Pop the mixture into the food processor and give it a couple of pulses to break down the cheese a bit more and better amalgamate the mixture.

Serve with crusty bread or crackers or use in a grilled cheese sandwich.