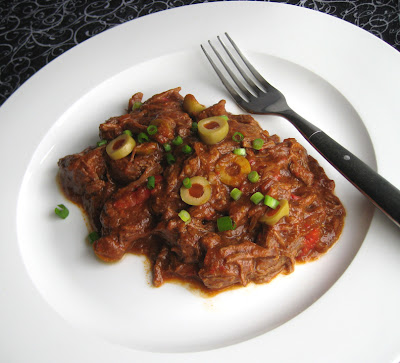 Ropa Vieja, which means "old rags" or "old clothes" in Spanish, is a classic Cuban dish of shredded beef seasoned with tomato, bell pepper, and cumin. It's traditionally made with flank steak, which shreds nicely into long rag-like pieces, but have you seen the price of flank steak these days? I'm sorry, but I'm not paying $13 for a chunk of meat that I'm going to stew into oblivion. Instead, I paid less than half that amount for a 2lb chuck roast, which I cut into cubes. If you're really lazy, you can buy pre-cubed stew beef, but that's going to cost a few more dollars.

There's a perfectly lovely recipe for ropa vieja in our book, Food Lovers' Guide to Baltimore, provided by Marta Quintana, owner of Havana Road in Towson, but it had too many steps for me on this particular Sunday. While I love to cook, sometimes I just like to throw things in a pot and see how it turns out. That probably makes me a perfect candidate for a slow cooker, but I have no room for another oversized kitchen gadget. Stovetop cooking is more my bag, anyway.

So to cut down on the steps, I cheated with a jar of Goya sofrito, which already contains onions and peppers and seasoning. Marta uses brisket, and doesn't brown it first, so I didn't brown the chuck. I just "chucked" it into the sofrito which I first mixed with water and seasoned with a couple of bay leaves and lots and lots of garlic. After stewing for a couple of hours, the meat was very tender. I put it aside while I thickened and further seasoned the stewing sauce with tomato paste and spices. Some ropa vieja recipes call for sliced olives and pimento, so I pulled two more jars out of the pantry and added some of each. After shredding the meat, I put it back into the sauce and cooked it a bit more before a final seasoning with salt, pepper, and lime juice.

Dump the sofrito into a stew pot and add about 2.5 jars' worth of water (rinsing out any sofrito clinging to the sides while doing so). Add the meat, the bay leaves and garlic, and cover the pot. Bring mixture to a boil, then reduce heat to a bare simmer. Cook for about 2 - 2.5 hours, or until the meat is fork tender.

Remove meat to a bowl with a slotted spoon. Turn the heat up under the pot of remaining liquid and add the tomato paste, cumin, and paprika. Bring to a boil, whisking well to combine. If there seems to be an excess of liquid, keep at a boil for a few minutes until it reduces to about 2 cups. If there's less than 2 cups in the pot, turn the heat down to a simmer, adding a little bit of beef stock, if necessary. You want the resulting dish to be like a very thick stew, but not dry.

Shred the meat with two forks and return to the pot. Stir in the green olives and pimento. Cook for an additional half hour. Remove from heat and add the lime juice and salt and pepper to taste.

Serve with rice, plantains, and black beans. Or just rice. Garnish with cilantro and green onion.