Several months back I was invited to try one of the new Maryland branches of Nando's Peri-Peri, an international chain specializing in hot-pepper-marinated chicken. The location was a bit out of my way, so I declined. But then another one popped up near work, and I was able to check out their wares on one of the "mock service" days prior to the grand opening.

My date for lunch was my Dad, and he selected the flame-grilled chicken breast with sides of cole slaw and corn on the cob. I was briefly tempted by wings but didn't feel like smelling like chicken for the rest of the day. I instead opted for the butternut squash and couscous salad with sliced peri-peri chicken and grilled halloumi cheese. 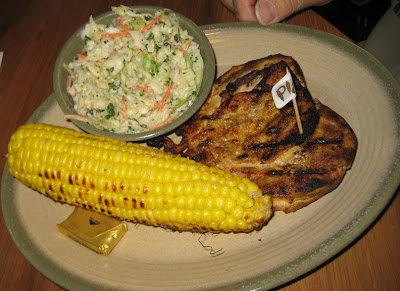 Dad enjoyed his meal. The chicken was tender and the corn was yellow. Yay for yellow corn! (I am not a fan of white.) The slaw was a bit...hmm...not bland. It just needed a little kick. It's mayo-based, but on the tart side, and if you're used to sweet slaw, it might be a disappointment. 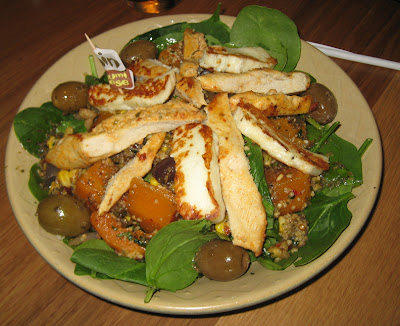 I loved my salad. The base was baby spinach that was topped with red onion, green and black olives, grilled corn, and couscous, plus big chunks of roasted butternut squash. The vinaigrette was slightly sweet and had a bit of heat. The chicken was a sliced version of Dad's, and the slabs of halloumi (which looked just like the chicken) had been grilled. Really tasty.

The chicken comes in a range of heat levels, from "plain-ish" to "extra hot." Our food was ordered "plain-ish," and had a very mild chili kick. We tasted the lemon & herb and medium sauces as well; the former was mild and had a nice herby flavor and the latter was not particularly hot to my palate.

There are a handful of choices for dessert at Nando's, and of those we chose to sample the peanut butter cupcakes. At $3.25 each, they're a bit pricier than found elsewhere - and smaller - but the chocolate cake was moist and the peanut butter frosting was rich and creamy and full of peanut butter goodness. 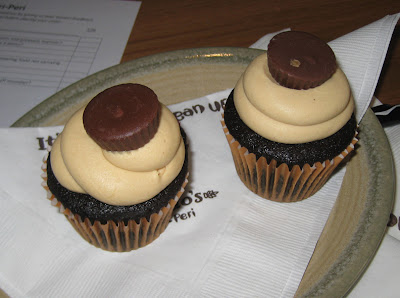 While we enjoyed the food, it seemed a bit spendy, at least for lunch. For instance, that chicken breast - supposedly a whole butterflied and deboned breast, a tad larger than the size of my palm - is $8.95 all by its lonesome. One side raises the price to $10.95, and with two sides the chicken costs $12.85. A half chicken, bones included, is more of a bargain at $9.45. My salad was $7.95, not including the chicken. That was an additional $2.95. The halloumi was an extra $2.25, for a grand total of $13.15. I suppose I've been spoiled by food trucks, but I don't normally spend anywhere near that amount for lunch. But, it was good, and I'm still tempted to try their wings.