So this should be interesting. In my haste to get out of the house this morning, I misplaced the notes I took last night. That's right, we're essentially flying this thing without a pilot!

Oh, I know - it was the finale, and like some bad 70s sitcom, it was filmed before a live audience. But nothing happened, apart from a couple of montages and a whole lot of cooking.

When we join the show, finalists Kristen and Brooke have already been cooking for a while. Padma takes us aside to give us the scoop. The cheftestants need to cook five courses for 160 people including the judges and the nine previous Top Chef winners. They'll go head-to-head with each course, and the first chef to win three rounds is Top Chef. Course two must include scallops, and course four must include snapper. Both chefs have chosen to make a dessert for course five, should it get that far. 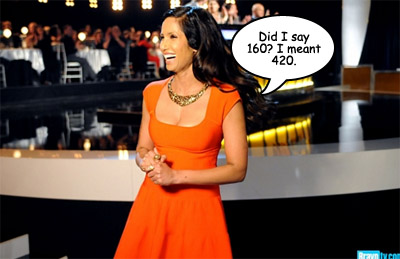 We then flashback to three hours prior, when Brooke and Kristen enter Kitchen Stadium. They're a bit flabbergasted to see an audience, so they obviously were not warned in advance. Each of the finalists has three hand-picked sous chefs waiting for them. Brooke has chosen Team California--CJ, Stefan, Kuniko--for whatever reason. Maybe to save Bravo airfare? Kristen, on the other hand, has chosen the sharpest knives in the box, namely the last three contestants to be eliminated from the competition--Mustache, Sheldon, and Lizzie. They have quick little meetings to explain their dishes to their sous and immediately start cooking.

We head back to the present and see that time is just about up for the first course. CJ is finishing up burning most of Brooke's crispy pig ear, and everyone is frantically plating. Time. is. up! and the judges get to eat.

The judges are Hugh, Emeril, Gail, Tom, and Padma. Despite being in Los Angeles, Wolfgang Puck's home base, he was not invited to the party. He was probably busy planning Oscar party food anyway.

Padma says something about cooking for 300 people. Earlier she told us 160. Clearly there aren't 300 plates on the tables, so she's either hitting the sauce pretty hard already, or has taken something that gives her double vision. Or maybe the producers told her to heighten the tension and this was the best she could come up with.* 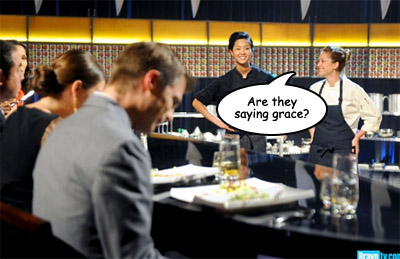 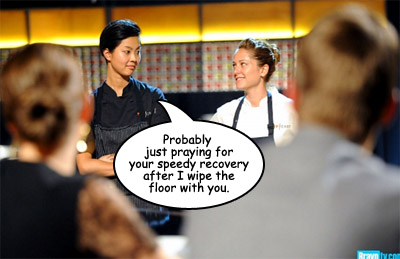 Err....what happens next? Ah...tasting. The judges taste Kristen's chicken liver mousse with frisée and hazelnuts and Brooke's pig ear and chicory salad with 6-minute egg. (Thanks to the lovely Hugh Acheson for providing descriptions of all of the show's dishes, especially since Bravo's internmonkeys had not put up any photos by 9am.) The ears are burnt on several dishes, but Padma's are perfectly cooked. The judges hem and haw and three of them choose Kristen's dish as their fave. Round One to Kristen.

Insert montage of Brooke's "journey" to the finale.

Back to the kitchen to cook scallops. Kristen is making a crudo of her gorgeous in-shell specimens, telling Sheldon to whip up a salt cure with lavender and citrus. Brooke gives hers a hard sear and serves it with 101 accompaniments including juniper, salt cod purée, romanesco, speck, black currant, and mustard seed vinaigrette. The judges taste and give the round to Brooke.

Kristen gets a "memories" montage, too. 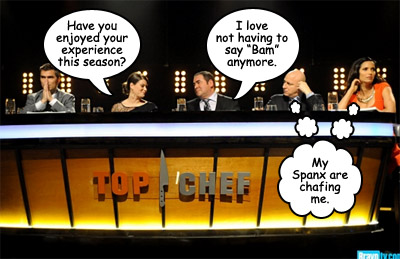 Round three is a pot luck round, and Kristen whips up a bit of crispy bone marrow with celery root puree, mushrooms, and bitter greens. Drool. Brooke is still bitter over her fuck-up with fried chicken six months ago and decides to redeem herself with chicken wings coated in vadouvan (an India-by-way-of-France curry-ish spice blend) served with "Sumac Yogurt-Tahini & Pickled Kohlrabi Fattoush." The judges get why she's made the wings, but not really, and Tom's not feeling the side dishes. Kristen wins the round, despite Padma's bitching that her dish was cold.

Round four must include snapper. Brooke has had lots of good luck with her oddball surf-and-turf creations, like the lamb-stuffed squid and frog leg and mussels combo from early episodes, so she throws another one out there - pork cheek and snapper with collard greens slaw and sorrel purée. Kristen goes much simpler with her dish, serving her fish with a portion of uni, little gem lettuce, and a shellfish nage. High-end chefs tend to be a sucker for sea urchin, so this was a good decision on her part. 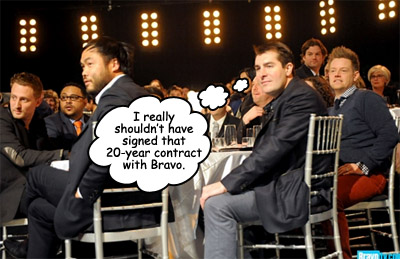 Then we get a barrage of commercials. Kristen leads the battle two challenges to one. If she wins this round, she is Top Chef. It's 10:56 pm when we get back to the program and it's not a supersized episode. Hmm....

Cheesy game show-style drama lights come on in the studio as Padma quizzes the judges about their favorite dish. I find myself thinking, "final answer?" after each of them pretends to hem and haw over their decision before picking Kristen.

I would have really enjoyed seeing the battle come down to the dessert course. Imagine that - a dessert being the difference between winning $125,000 and not winning $125,000. Of course, that's par for the course on Top Chef: Just Desserts, but on Top Chef: Savory, desserts tend to be the kiss of death. Tom clarifies on his blog that the chefs were simply required to make five dishes. None of them had to be a dessert.

So another season of Top Chef is over, thank sweet baby Jesus. I hope the three of you have enjoyed my recaps. :)

*Gail Simmons says that there were 300 guests present, but only 160 of them were served food. Seems a bit unfair, no?