This week, the three remaining cheftestants rise and shine to find a message from Padma, urging them to dress warmly and to meet her somewhere near the top of a mountain. They get into a Toyota Sponsormobile and drive for a piece, then get into a helicopter. Brooke freaks out and doesn't want to go. She not only hates boats, but she also hates helicopters. Eventually, after some tears and a couple of Xanax, she hops aboard and puts a death grip on the boys' arms as they fly over some gorgeous Alaska scenery. They urge her to unclench her eyes and look around, and, after peeing herself a little, she gradually enjoys the rest of the trip. 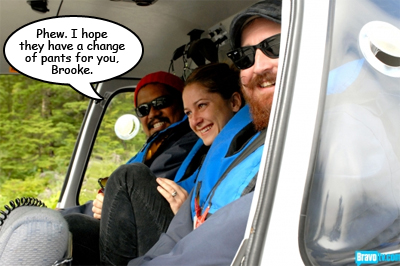 Once on the ground, they find dog sleds waiting to take them to yet another snowy destination. Thankfully, Brooke doesn't seem to have an irrational fear of dogs or dog sleds. Sheldon remarks that he wishes he had some really good reefer. If I were him, I'd ask Padma. Finally, they reach Padma and Tom on Norris Glacier. They are at an Iditarod-training camp, and there are dozens of dogs, each tied to his or her own mini-igloo. The cheftestants' final Quickfire Challenge of the competition is to kill and cook a dog and make a coat from its pelt create a dish using whatever happens to be in the camp's mess tents.

Though it would seem that a mess tent in Alaska would be full of cans of Dinty Moore and MRE-type rations, there's a surprising assortment of fresh fruit, like watermelon. After grabbing their ingredients, the three convene in the kitchen, which Mustache calls "super tiny." Well, it's about twice as large as my home kitchen, so I don't know about that.

Brooke and Sheldon both cook halibut, and Mustache makes...wait for it...breakfast. Brooke jokingly says it's all he knows how to make, and she's not really wrong. Padma and Tom taste the dishes with the aid of some sunburned dog sled racers who are probably only in their early 20s now but after a few more months of sun-on-snow glare will look twice their age. They decide that the cheftestants can cook for them any time, but like Brooke's halibut with panzanella salad the best.

They get back on the helicopter, this time with Padma. Then the four of them and their cameraman squeeze into the Toyota Sponsormobile, with Padma at the wheel. She drives them back to their house, where Emeril and LA chef Roy Choi have taken over the kitchen. Roy, a Food & Wine best new chef, rose to fame with his fleet of Kogi Korean BBQ Food trucks. He tells the chefs that before he got into cooking full time, he was a real "scumbag." But one day, while being a scumbag, doing scumbag things like hanging out on the couch, watching Emeril Live! he happened to catch an episode in which Emeril cooks short ribs. It was a lightbulb moment, and right after that, Choi looked into culinary schools.

Emeril's got to feel a bit powerful this season. First Micah likens him to Moses, and now Roy Choi reveals he's an apostle. 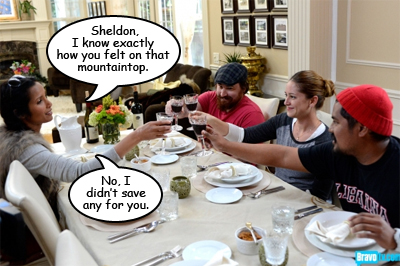 Over a lunch of braised short ribs with Korean flavors, plus rice AND cornbread, Padma announces that the Elimination Challenge involves each of the three cheftestants' own "a-ha! moments." They will have to create a dish that represents the moment they decided to become a chef, and they'll be serving their meals to a panel of judges including the current governor of Alaska and his first lady (plus Emeril, Roy, Gail, and Wolfie).

But first - mild drama. Mustache's wife is going into labor. She calls him every few hours to make him feel guilty for not being around for the birth of their first child. He's verklempt, but he also wants to win.

The next day, the three do some prep work for their dishes. Brooke says she's known she's wanted to be a chef since she was four, so she's having trouble conceptualizing a dish around the diet of a typical four-year-old - chicken fingers and ketchup sandwiches. Sheldon was inspired by tubby Hawaiian chef, Sam Choy, who happens to be a friend of Emeril. And Mustache was inspired by his first taste of foie gras. He tells Tom that he had been a wrestler, always concerned about his weight, and once found himself reading a copy of Food & Wine while riding an exercise bike in a sauna. Guess he couldn't have been reading Gourmet or Bon Appetit or Sauveur, since Food & Wine is one of Top Chef's sponsors....

While all this is happening, Mustache's wife gives birth. She Skypes him later from the hospital, to further rub in the guilt of not being there when his kid is born. She insists it wasn't so bad and that she might want to do it again later. Maybe when Mustache is competing on the next season of Top Chef All-Stars, or filming a reality special on the art of mustache waxing, along with current Project Runway designer Daniel Esquivel.

The next day, they head to the Governor's mansion to finish cooking. Mustache keeps asking Brooke what she's cooking, and she keeps answering, "I don't know yet." And she's only partly lying. Eventually she decided on making braised chicken, inspired by her mama, but also grilled quail and an assortment of other accompaniments. Sheldon is keeping it Asian and makes a Chinese-style pan-roasted rockfish with spot prawns. Mustache makes foie gras three ways - a torchon, a mousse piped into a profiterole, and seared. 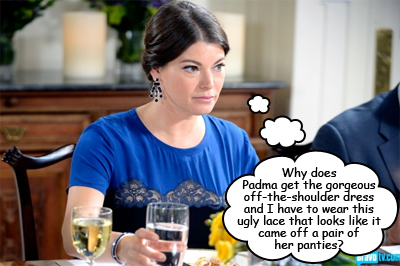 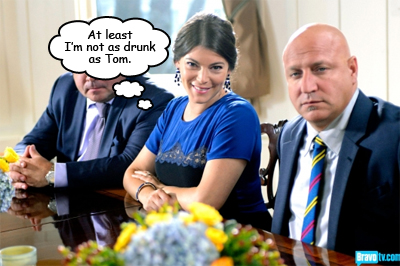 Brooke serves first, and except for an overcooked quail breast, her dish is layered with delicious flavors. Mustache has problems with his torchon because one can't be made successfully in a couple of hours; it needs time to poach and cool properly. Gail makes faces at her portion of the crumbly, undercooked liver. However, all three components of his dish are delicious, particularly the apricot with the seared foie. Finally, Sheldon's seafood is perfectly cooked, but his broth has reduced too much and is salty as hell.

Only two chefs are moving to the finale in Los Angeles, and it's pretty clear that despite some tough quail, Brooke is one of them. But is oversalted broth or overambitious and undercooked foie a more egregious error?

Mustache tells us that he wants to win and anything less is failure. Needless to say, he's a failure, because he doesn't move on. But there's always Last Chance Kitchen!

Next week - the winner of Last Chance Kitchen joins Brooke and Sheldon in the finale. I'll save you watching LCK - Lizzie, who won Save a Chef over CJ, battles Mustache and Kristen. Mustache is eliminated, and the winner is...

...I don't know. They're saving it for next week. Bastards.