We're getting down to the wire here on Top Chef Seattle - only about eight six four episodes to go. God, really? Do we have to sit through another four episodes? Let's do the math:

I could be wrong, but I'm probably not. Last year we had 18 episodes and were forced to watch Beverly and the other cheftestants compete in Olympic-like events, for the sheer ridiculousness of it. What nonsense will we be subjected to this time? Stay tuned. Or not. If you're smart, you'll give up now.

This week the cheftestants - Mustache, Sheldon, Brooke, and Lizzie - start the show off by lamenting the loss of dear, sweet, kind, thumb-like Stefan. They miss his good heart, or something like that. Surely he paid them to compliment him after he left.

The four are forced to walk the plank in Juneau, Alaska, where it is cold. They find Padma, shivering in a fuzzy vest and turtleneck, with a chef named Sean Brock, whom the network has flown nearly 4,000 miles from Charleston, SC to the southernmost part of Alaska. For what reason, we'll never know. I suppose there aren't any notable chefs in that area of the US, but certainly Canada could have lent them one from British Columbia? 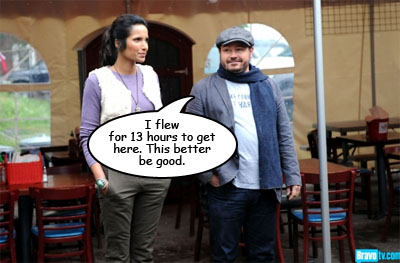 In any case, the cheftestants have to make a dish using local crab at a joint called Tracy's King Crab Shack. Alaska produces 76 million pounds of crab annually, so the chefs have plenty of raw material to choose from. 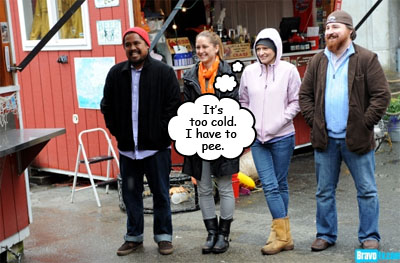 After thirty minutes, Brooke presents her crab toast, Lizzie her crab frittata, Sheldon his miso soup with pine-smoked asparagus (a trick he picked up from the Noma cookbook), and Mustache his succotash with bacon. Lizzie's frittata had too many flavors other than crab, and Mustache should know not to make succotash for a low country cook who thinks his own is the best. Padma and Sean did like Brooke's toast, but they especially liked Sheldon's soup, made with crab guts. Mmm...crab guts. He gets the win and a check for $5,000.

Next, the chefs have to use still more seafood. And make bread. While salmon and sourdough seems an unlikely pairing, that's apparently what the locals eat. When they get to the charming little cottage where they will be staying during the Juneau leg of the journey, they find vats of 31-year-old sourdough starter left for them by a local baker. They immediately set to making their bread for the next day.

When they sit down to wait for their dough to rise, Brooke notices that Mustache has somehow gotten hold of a verboten cell phone. His wife is in labor and the network kindly allows him to keep tabs on the proceedings. Plus, it could make good drama for the show if the baby is born with three heads. 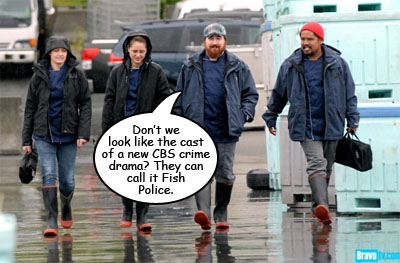 The next day, they have to "shop" for their fish. They suit up in hip waders and head to the dock where a fishing boat is bringing in a haul of freshly caught chum, king, sockeye, and other salmon varieties. The chefs choose their fish and gut them right then and there. Lizzie, whose father has died recently, has flashbacks to her childhood and fishing and gutting with her dad. She gets teary and tells us he would be so proud of her. And at that point we realize she must be going home this week.

Later, the final four are cooking up their dishes at a place called Gold Creek Salmon Bake, which is an outdoor venue. Guess the locals are used to the cold, but Padma is wearing a hat and mittens when she shows up. She looks uncomfortable with the fact that she can't wear anything leather or low cut in this episode.

The judges this time are Sean Brock, Hugh, Emeril, and Gail. As they take their seats, they talk about bears being in the vicinity. Tom jokes that bears are a part of his fan base. The others look blankly at him, clearly not getting the joke. 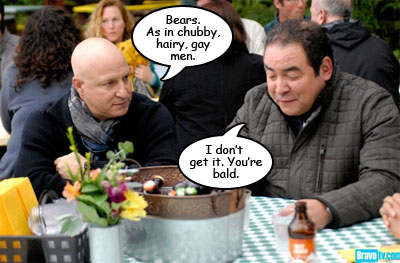 Brooke presents her dish first. She's made soup, as have two of her competition. She serves poached sockeye salmon in a seafood broth with mustard seed caviar and dill sourdough for dipping. The dish gets raves - the fish is nicely cooked, the broth is delicious, and the dill in the bread was a nice touch. Sheldon's bread, made with green tea and chives, causes Padma to make a face. She loves tea and chives, but not together and not in bread. But his pea soup is delicious. The salmon, not so much. He's smoked it, and while parts of it are well cooked, other parts have too much char and too much bitter smoke flavor. Plus, he's used chum, which as Padma notes, is used as dog food by the locals. 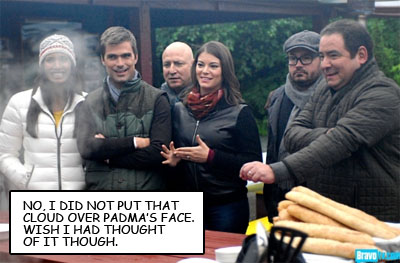 Mustache has prepared a roasted garlic sourdough soup with sockeye salmon and olive croutons. Emeril loves the soup, of course, but Tom thinks it's too garlicky and overwhelms the salmon, which is perfectly cooked. They all like the idea of the olive croutons.

Finally, Lizzie presents her sourdough rolls filled with citrus-and-beet-glazed salmon. The rolls are great, perfectly crusty and wonderful. But the salmon has little or no flavor. Tom wonders why she didn't marinate it before cooking, rather than glaze it, and where is the seasoning?

The judges finish eating and canvas the other 200 diners at the Salmon Bake to find out whose dish was most popular. Later, at Judges' Table, the four cheftestants hear the verdict while rain is pouring down around them. It's certainly scenic, but I'm betting it's cold and damp and the judging probably went pretty quickly that evening.

Brooke gets the win because her dish was close to perfect. Lizzie's dish was too simple to have been so bland, and she gets sent to face Kristen in Last Chance Kitchen.

Next week: helicopters! dog sleds! lots of non-cooking stuff! The Governor of Alaska! (I'm betting Sarah Palin wishes she were still in that position, so she'd have another chance to extend her fifteen minutes by whoring herself and her family on yet another reality show.)