Remember the Steak & Ale on Timonium Road? If you walk into Basta Pasta, which now occupies that same building, you'll have flashbacks to the late 60s and early 70s, when stained glass was considered a classy addition to any restaurant. Apart from a few cosmetic changes like paint, and the addition of some landscape paintings (presumably of Italy), the place looks much the same - stained glass and all. Rather than red meat and, er, ale, the new tenant's menu now offers a panoply of familiar Italian-style dishes like fettuccine Alfredo and Eggplant Parmigiana, plus some Maryland-style seafood and lots of fried appetizers.

We chose Basta Pasta as our second Baltimore County Restaurant Week visit because the special menu's offerings seemed somewhat inventive for a neighborhood joint. And four courses for $30. In addition to the usual app/entree/dessert, there was a salad course. A seemingly bottomless bowl of pre-dressed but untossed salad festooned with boxed croutons and an unremarkable dressing arrived immediately after we placed our order, followed some minutes thereafter by a basket of plain warm breadsticks. Very Olive Garden, and a touch that some people probably appreciate. (The elderly four-top next to ours requested that two bowls of salad and two baskets of breadsticks be brought to the table post-haste.) But I'm getting ahead of myself here. I want to mention the service.

Our waiter was clearly trying to do what he was trained to do. For instance, he was probably told to point out the Restaurant Week menu on the back of the regular menu, but he had to pull the menu out of my hand to do so. And I was already on that page. He also took the time to mention his name the first three times he visited our table although we clearly were not the most elderly people in the joint. And every time I thanked him for something, he said, "no problem." I hate that. Of course it's not a problem, it's your job. 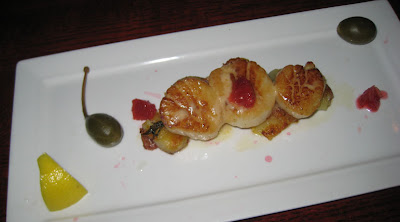 Anyhoo...on to the food. I thought the dish described as "rosemary skewered scallops grilled and finished with a blood orange butter sauce and caper berries" sounded like it could be tasty. The scallops were nicely cooked, but none of the flavors went together. The rosemary overwhelmed the scallops, the butter sauce tasted simply of butter, and the caperberries (the fruit of the caper plant; regular capers are flower buds) were merely pickled, salty things that happened to be on the same plate. The bits of blood orange didn't have much flavor at all. 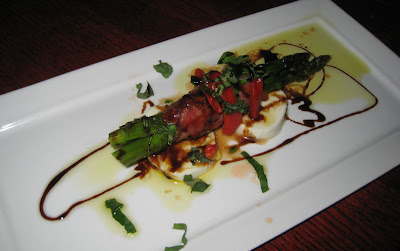 Mr Minx's prosciutto-wrapped asparagus served over fresh mozzarella, topped with roasted red peppers, and finished with a balsamic reduction was much more successful. The asparagus was cooked perfectly, the prosciutto was a bit crisp, and while the balsamic syrup seemed overly-sweet on its own, when eaten with the salty prosciutto, the flavors balanced nicely. 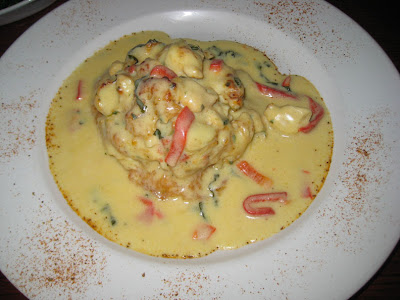 There were several entrées available, and after hemming and hawing a bit, I took the risk of ordering Chicken Chesapeake. I'm usually afraid of chicken breasts in a restaurant because they're often dry and overcooked, but the cutlet in this dish was tender and moist. It was topped with what was called a "colossal lump crab cake," and judging by the lumps of breading here and there, it was definitely a crab cake. And a pretty decent one at that. The creamy "Chesapeake" sauce was a thin bearnaise, lightly flavored with tarragon and much improved with an extra pinch of salt.

The menu suggested that I could have a side of steamed broccoli or linguine marinara, but when I asked our waiter, he said the dish came with the linguine but he'd make sure I got the broccoli. Um, thanks. That broccoli was bright green and retained a bit of crispness - yay - but it tasted like it was coated with movie theater popcorn "butter" - boo. 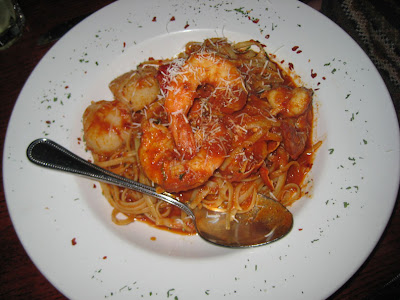 Mr Minx went for the seafood fra diavlo (sic), slightly overcooked pasta in a spicy tomato sauce with an impressive pile of nicely-cooked seafood including a lobster tail, 2 jumbo shrimp, scallops, and crabmeat. It was very peppery and quite good - the best dish of the evening, hands down.

Dessert was a bit more uneven. While my creme brulée was very homey and eggy, Mr Minx's apple crumble cheesecake had a commercial quality to it and was very sweet.

So. The food at Basta Pasta was a bit all over the place. The boxed croutons and margarine had no place on an Italian table, but the "fra diavlo" was commendable. Apparently they must be doing something right, as there were several more diners, including young families, by the time we left. Must be the salad and breadsticks.