The things I do for my art.

I thought it might be an interesting idea for Mr Minx and I to do a taste test on a couple of those Healthy Choice Top Chef meals. Top Chef viewers will recall that we were subjected to commercials for this product during every one of the eighteen episodes (e i g h t e e n episodes) of the never-ending season 9, and former cheftestants Casey Thompson and Ryan Scott made them seem pretty good. Or at least not horrible. 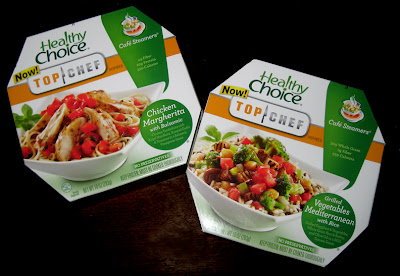 We chose two of the three varieties carried by our local Safeway, the Grilled Vegetables Mediterranean with Rice and the Chicken Margherita with Balsamic.

I popped mine in the microwave first. After a few minutes, the combination of odors that make me loathe diet frozen meals so much started to fill the air: broccoli, bell pepper, and onion powder. I was starting to dread dinner.

After four minutes, I removed the plastic bowl from the oven, tore off the plastic, and lifted the steamer basket holding the dry ingredients off of the pool of congealed-looking sauce in the bottom bowl. Mr Minx took one look and began to laugh so hard, he pulled a muscle in his side. "That's just a bowl of sad," he said, as I flipped the basket, stirred up the mess, and put it aside while I put his dinner in the microwave. 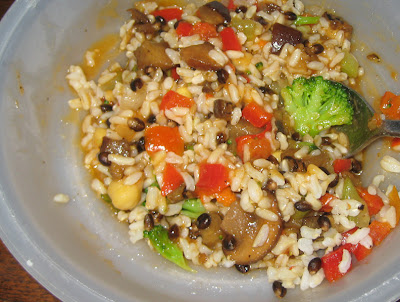 While his pasta was cooking, I took a taste of my dish. He was right. It tasted of sadness.

This "grilled vegetables Mediterranean" was truly horrendous. Both the broccoli and bell peppers had the typical water-logged, raw, texture that they usually have after being frozen and then not cooked long enough. But they were the only things that had any sort of flavor whatsoever, apart from the onion powder. It took a few tastes (which is about all I wanted to take) to realize that the soggy and somewhat crunchy brown blobs were barely-cooked eggplant, and I assume the burnt-looking brown buggy things were barley. There were also some undercooked chickpeas which I pushed to the side. I really didn't want to finish this mess because it was making me angry, but I found that a bit of vitriol - and lashings of Sriracha - helped me to finish. Thankfully, it was a very very small portion with only 230 calories. (I supplemented the meal with a huge piece of thickly buttered fresh whole wheat bread.)

Mr Minx's chicken and pasta dish was at least 1000% better. There was no broccoli, no bell peppers, and no onion powder stench. Actually, the dish gave off a somewhat pleasant toasty/grilled smell. The chicken was very tender and tasted of...chicken. The sauce, however, was oddly sweet. Odd, because it contained balsamic vinegar, and vinegar is...sour. In any case, it was pretty good for what it was.

So we had one minor hit and one huge fail. Honestly, Bravo should be embarrassed to have the name Top Chef put on either of the dishes, but I guess when Healthy Choice ponies up the big prize money for the season, you do what you gotta do.

Have you tried any of these meals? What did you think?