Let me start off by telling you I'm dead tired. I cooked all day Wednesday and stayed up to watch Top Chef when I really wanted to crawl into bed with my teddy bear. Thursday I helped cook the turkey by committee and dealt with the usual holiday/relatives stress, and then I stayed up way past my bedtime to watch the Harbowl. Go Ravens! And now I've gotten up early just to write this recap. I can't guarantee that it will be funny. Or even coherent.

This week we had both Battle Chile-with-an-E and Battle Chili-with-an-I. For the Quickfire, the cheftestants had to chose a variety of chile pepper and create a dish around it. For their convenience, there was a tote board listing the heat factor of each variety available, presented in Scoville units, along with the potential monetary value--if the chef used that particular chile in a winning dish--presented in dollars. Sensibly, the hotter the chile, the more money a chef could win. 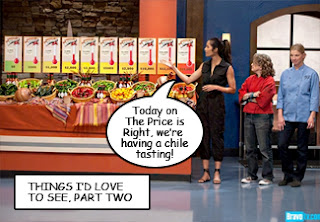 Chuy, the resident Mexican, tells us that he's got enough habanero chiles stockpiled at home to last until the next nuclear fallout. Huh? When was the last nuclear fallout? Are habaneros supposed to be a good antidote for radiation poisoning? Does he know something we don't? 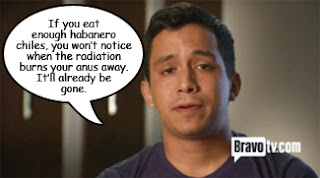 Beverly doesn't seem to get the point of the challenge and chooses the Anaheim chile, which is so mild she serves it raw, with a Korean condiment and a leaf of lettuce. Ok, I get that she's Korean, but is she going to make Korean food for every challenge now? Like Debbie Lee on Next Food Network Star a couple of  years back, the annoying chick whose battle cry was "I'm Korean!"?

Paul is the only chef who's daring enough to choose to work with the Ghost chile, which at a hundred bazillion Scoville units, is the hottest chile in existence. Or at least it was last week. If he's successful - and doesn't rub his eyes - he'll be seeing $20,000 in his future.

The guest judges this week are the Too Hot Tamales, Susan Feniger and Mary Sue Milliken, both of whom competed on Top Chef Masters and did quite well but somehow didn't manage to win. Along with Padma, they go around the room and taste all fifteen chile-packed dishes and seem to finish quite admirably without sweating, begging for a glass of milk, or running to the bathroom, butt cheeks clenched. Take that, Aaron Sanchez and Roger Mooking! 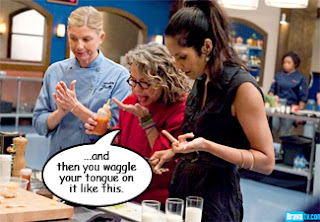 They chose Beverly's raw chiles, Chuy's scallops achiote with too-obvious canned tomato flavor, and Richie's too-sweet/not-hot enough scallop and pineapple dish as their least favorites. (This is not Top Scallop, after all.) On top were Heather's dish which involved cous cous, Grayson's daring habanero popper, and Paul's super hot Ghost chile coconut soup. The win appropriately goes to the cheftestant with the biggest cojones - Paul gets both immunity and 20K. Nice work.

For the second challenge du jour, the cheftestants are put into five teams of three and told that they will be entering a chili cook-off. They have no time limit for the challenge, as long as their dishes are ready by 7pm the following evening. The catch is...they have to cook in the Top Chef Mansion, which doesn't have a kitchen big enough to accommodate fifteen cooks.

Before they get a chance to figure this out, the cheftestants go shopping. Chefs immediately storm the meat counter demanding 30 lbs of brisket, which of course the store does not have times five. The chefs who don't get brisket end up with other cuts of meat and hope for the best. (Personally, I like chuck. Brisket gets too stringy.)

Once back at the house, the teams fight over space. Some go outside to take advantage of the grills, smokers, and giant outdoor fireplace, while one smart team stays inside the kitchen with the air conditioning. 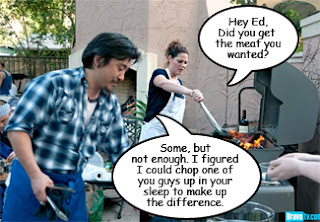 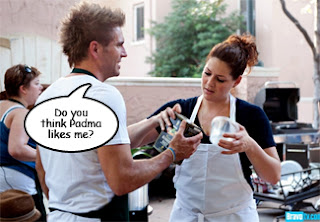 Some teams cook all night long, while others wisely choose to go to bed at some point. Everyone gets punchy and there's drinking and swimming involved. Handsome Chris goes to his bunk bed and doodles hearts with Padma's name in them on the wall.

The next day, the chefs are weary but have to suit up and pack their chilis to take to the Tejas Rodeo. After setting up their pots, the chefs hand out samples to 200 or so rodeo attendees. These tasters are also judges for this particular contest, and will choose the overall winning team. The regular band of Judges - this week including Gail Simmons - get to pick the loser. 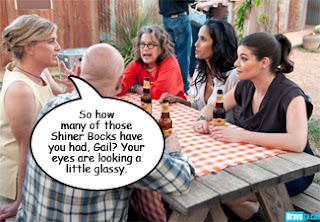 After the tasting, the chefs go hang out in the stands and watch the rodeo. After eating all of that chili, I would imagine that it was quite a fragrant place - and not in a good way.

As the calves are roped and clown cowboys get stomped, Beverly starts crying. Just when I start to think that  she's crying about the unnecessarily cruel treatment of animals just for sport, she starts babbling about missing her husband and wishing he were there. In episode FOUR, with ninety-umpteen episodes to go. Gack. Maybe she'll go home this week.

And then the announcer says it's time to declare the winner of the Tejas Chili Cook-off. Padma comes out on a horse and Handsome Chris starts creaming his jeans over her. It's really kind of sickening. 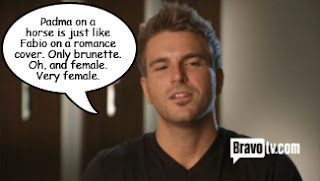 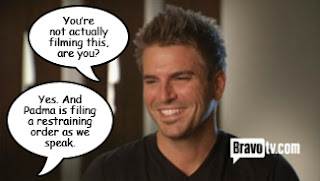 Anyhoo, Padma declares the Green Team of Handsome Chris, Chuy, and Sarah to be the winner. 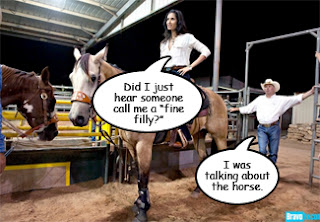 The Black Team of Beverly, Richie, and Nyesha made the least- favorite chili, so one of them will be going home. But instead of the usual eeny-meeny-miney-mo decision, the three of them are told that they can get a second chance by successfully repurposing their losing molé-style chili as a dish from Chile! Well, no, but that would have been fun.

The three go racing into a nearby kitchen and get to work, and when 30 minutes is up they serve their dishes to the judges, while the other cheftestants sit nearby and doze off. Squinty Chris is distraught that his little buddy Richie is on the chopping block. He wants them to go all the way to the finale together, but alas that's not going to happen.

Beverly did the best job of repurposing the chili, using it as a sauce for seared tuna. Drat. And Nyesha's Frito-crusted shrimp came in second, which leaves Richie's one-dimensional pork tenderloin (also with Fritos) on the bottom.

He and Squinty Chris share a tearful embrace. After hearing them say "I love you" to each other, it's clear that this particular bromance has gone on for quite a long time. Kind of touching, actually. 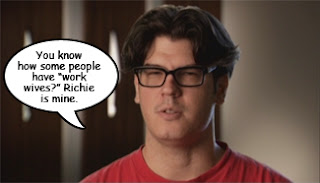 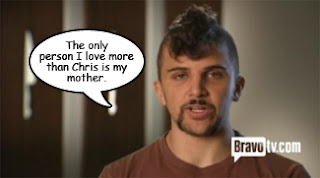 Next week: the chefs head to Dallas and do whatever there is to do in Dallas. (I've only ever been to the airport...it's a nice airport. Other than that, I got nothing.)