Last week, we met two-thirds of the twenty-nine chefs who entered this competition thinking they were going to be competing on Top Chef. Ok, well all of them are competing on Top Chef, but, ultimately, only sixteen of them get to be bonafide cheftestants. While this seemed like a fabulous idea to me on paper, I'm finding it really difficult to do recaps of the first two episodes. For one thing - I have a cold and can barely think. (I even typed "thing" instead of "think." And this is why I proofread.) For another, there are entirely too many chefs. Do I try to focus on individual antics? Wait - what do you mean there are no antics? Apart from last week's brief appearance of Tyler the Prick, there wasn't a lot of drama. No drama = not much for me to make fun of. Bah.

But lets proceed, shall we? 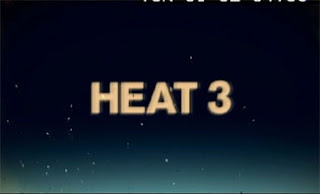 For the third and final heat, we have Hughnibrow replacing Gail. 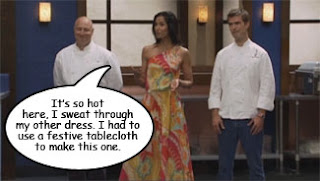 Doesn't Padma look practically emaciated this season? Her boobs are deflated. Guess that's what happens when you have a kid hanging off of them, eh?

The challenge this time is to make a dish using any of ten available main ingredients such as octopus and brussels sprouts. The chefs have three minutes to decide who is cooking what and then they are allowed to take the ingredient to their station. On each platter, along with the theme ingredient, is a small cloche concealing a timer set for 20, 40, or 60 minutes. When the cloches are removed, there are groans from the 20 and 40 minute people who will have to think and work more quickly than the 60 minute gang. 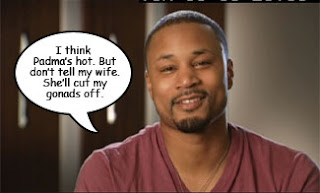 As the wanna-be cheftestants start cooking, we switch to the stew room, where the four chefs on the bubble - Molly, Edward, Janine, and Grayson - have been stuck in there for a whole week. They're getting quite punchy. 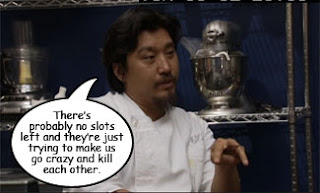 As the four get to know each other, they realize that none of them have visible tattoos. This makes them wonder if that's what got them stuck in the stew room to begin with. As if tattoos have magical powers.

Back in the Really Big Texas-sized Top Chef kitchen, the chefs are scurrying about. Chef Andrew - one of the unlucky 20-minute chefs - is fussing over some mushrooms which will take longer to clean than to cook. Padma-fan Chaz is making risotto, and because his wife is Italian, he feels there's extra pressure for him to perform well. 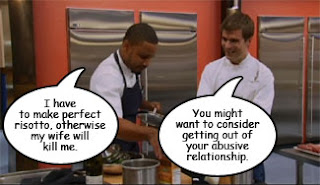 He's using a really big Texas-sized pan to make three whole servings, and I have to wonder if that's advisable. I mean, won't his liquid evaporate that much faster in a large pan? But he only seems to be worried about pleasing his wife. (Which of course is a good thing. Always endeavor to please your wife. Especially if your wife is as scary as Chaz' wife apparently is.)

The timer goes off for the 20 minute group. After some cursing and tears, they present their dishes to Padma, Tom, and Hugh. Paul's dish earns him a chef's coat, Kim is sent packing, and Andrew is placed on the bubble. 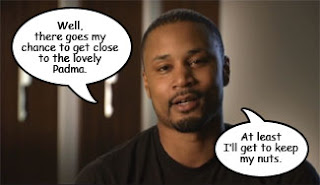 Jonathan and Berenice are also sent home, and French guy Laurent is placed on the bubble. 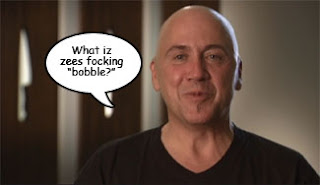 Finally, Beverly, Lindsay, and Ashley present their 60-minute dishes. Ashley, who used a pressure cooker for the very first time, still ends up with tough oxtails. She's sent home, but Lindsay and Beverly are rewarded with chef coats. They are chefs 13 and 14 of 16, which leaves two slots left for the six chefs stewing on the bubble.

For the successful chefs, it's time to go to the mansion, meet the other chefs, and... 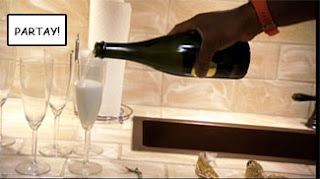 ...drink some bubbly. But for the Bubble Buddies, it's time to get down to work. Ed's feeling a little mass-murder-y. Stop it, Edward. You're turning me on.

Padma puts the kibosh on any potential bloodshed as she walks into the stew room just as Ed is sharpening his knives. She puts on her funeral director's voice and invites the six to join her in the Big Kitchen. 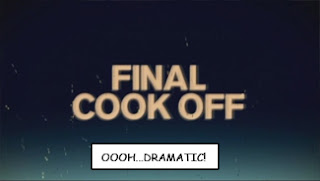 There we find Tom, Hugh, and Emeril, who seems really grumpy. 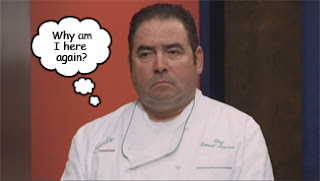 The bubble chefs receive their challenge: to create one dish using any of the ingredients available in the Top Chef Super Huge kitchen. In 45 minutes. In the meantime, we get to learn a bit more about the six chefs who are fighting for two spots in the competition. 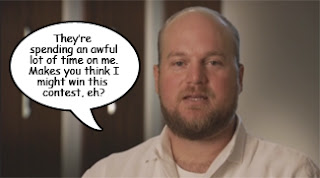 Andrew's making Spanish-style mussels, which sounds pretty good. Molly and Grayson are both making shrimp, and Frenchy and Janine are using scallops. 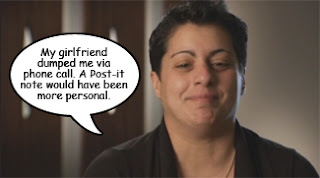 I feel for Janine, who tells us about her broken relationship. Dude - her girlfriend dumped her because she didn't like the vows Janine made during their commitment ceremony! That's even lamer than Kim Kardashian's reasons for divorcing after only 72 days of marriage. ("I asked Kris if a skirt made my butt look big and he paused before he said, 'yes.'") 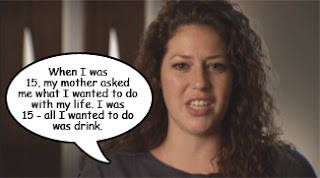 And we also get to know Grayson a little better. Apparently she was an extremely ambitious youth.

Ed sees that the other five chefs are making seafood, so he decides to be different and grabs some duck to work with. He's feeling confident about his dish and is sure he'll be moving on in the competition. And then... 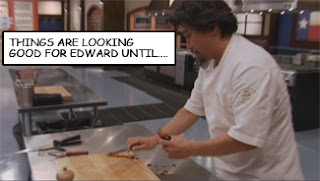 ...he decides that opening a bottle of sauce by twisting off the top is for mere mortals. Instead, he sabers it off with a sharp knife, as if it's a bottle of champagne. And he slices his finger in the process. Badly. Luckily, there's a medic hanging around who cleans him up and bandages his hand while Lee tries to continue cooking with the hand he has left. 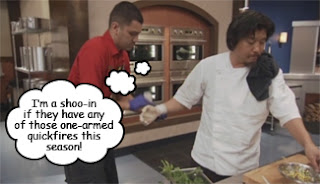 At the end of 45 minutes, it's time for Judges' Table. 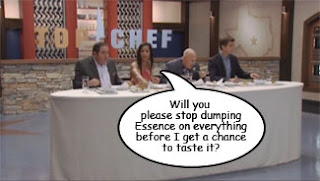 For unknown reasons, the male judges have put on suits, but Padma is still wearing the same flowery tablecloth as before. The table is gussied up, too. It's as if telling the final four chefs to pack their knives and go is somehow more important than was kicking off the previous nine. 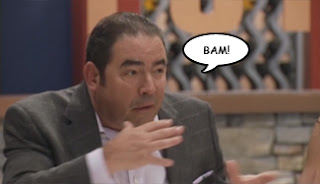 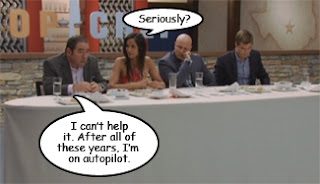 Molly is the first to be sent packing for her overcooked shrimp. 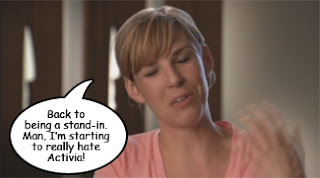 Frenchy is ousted next for his duo of scallops. (What's with all the duo-of and trio-of shit we've been seeing in cooking competitions lately? They've been doing it all over the Next Iron Chef, too. As one judge pointed out - it demonstrates a lack of confidence.)

Ed is told that his decision to make mushi (a yummy Japanese custard) was a bold one that payed off. Padma hands him a chef jacket. And now he doesn't have to resort to executing his fellow competitors. Well, not the ones on the bubble....

There's still some time left in the episode so the judges have to drag things out to prolong the agony. Tom goes over Janine's, Grayson's, and Andrew's dishes once more before Padma sends Andrew packing. Then it's down to the Jilted Lesbian and the Teenage Alcoholic, and I'm kinda rooting for Janine. But instead of a verdict...we get a commercial! Sheesh. 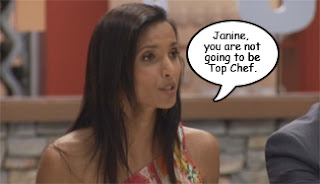 And then Janine gets sent home. She doesn't even pretend to be happy for Grayson, and I don't blame her. Hopefully she'll perform well in the Last Chance Kitchen webisodes.

And then there were sixteen. Next week, the competition starts in earnest. So...did you like the extra two weeks of competitors? Or would you have preferred to start with the 16 finalists?