This week, we find our Top Chef All-Stars finalists soaking up the sun sweating over hot cooktops in the Bahamas. All five are ready to play. DoucheyMike has been training in the top kitchens of Washington, DC. Carla is all about redemption, which seems to be her favorite word this season. Tiffany feels like an underdog. And Blais' under-eye bags are so large, I'm wondering if he has an immersion circulator packed in one of them. At one point he claims to have practiced cooking every fish that swims within 100 miles of the Bahamas, and that if a challenge involved hunting, killing, and cooking a goat, he'd do it. 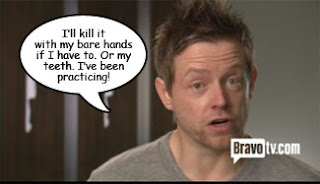 They walk around the island and meet up with Padma, Tom, and guest judge Eric Ripert (I was wondering when he was going to show up this season). But wait, there are more people hanging around - Stephanie Izard, Hosea Rosenberg, Michael Voltaggio, and Kevin Sbraga, former cheftestants who have won their season. 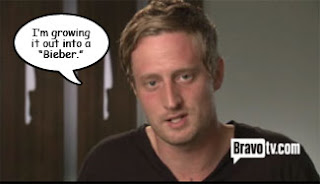 For the Quickfire Challenge, the five All-Star finalists must go head-to-head against the winner of their season. The victor of each pair gets a cool $10,000, and in Stephanie's case, should she beat both Blais and Antonia, she has the opportunity to win $20K. 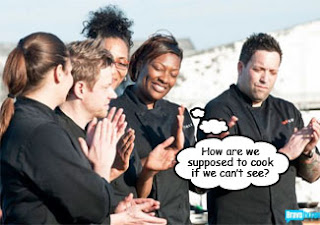 With 40 minutes on the clock, each duo must cook a dish using the same protein. For the two chefs from Season 6, they have to prepare a duck dish. The three from season 4 have veal. Five gets lamb. And seven has pork, in the form of a baby pig. Mercifully they only show us the rear legs, but it still looks a little too human. 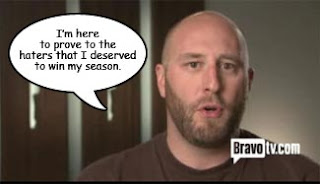 Good luck. Wait, who are you again?

After butchering animals and cooking in the sun, working on low tables that make Kevin Sbraga's back hurt, with induction burners that crap out every five minutes, time is up. The judges judge and they choose Tiffany's dish over Kevin's, Hosea's over Carla's, Stephanie's over Antonia's, Blais' over Stephanie's, and Frankendouche's over Michael's.

The old winners (some of whom are now losers, some of whom were always Hosea losers) leave and Padma announces that the finalists have been invited to a party held by Bahamian royalty. And because she was feeling magnanimous, she volunteered them to cook for the party. Immediately the finalists start thinking about stereotypical royalty - rich folks who eat rich food, marry their own cousins, and swan about in ermines and diamond-encrusted crowns - and plan their menus accordingly. They prep their food at the kitchens of the Cove at Atlantis--Atlantis the resort, not the lost city. Could be that much more challenging though if they recheftestants had to cook under water. After 2.5 hours, they change out of their chefs togs and into very casual clothing that doesn't seem at all appropriate to wear while meeting the King, and pile into an SUV that takes them to the party venue, with a police escort.

Doucheface says last time he had a police escort, he was going to jail.

Eventually, the motorcade is halted by what appears to be either a street festival or a commercial shoot for Victoria's Secret's latest line of Angel Boobslings. 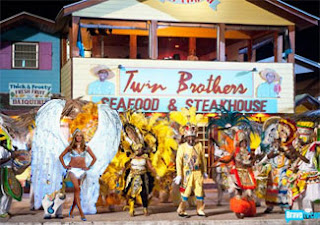 After stopping in front a colorful shack that is most definitely not the digs of any caviar-swilling royalty, the chefs are forcibly removed from their vehicles and made to dance in the street along with men wearing feathers. They are then introduced to "Bahamian royalty" in the form of the King of Junkanoo, Percy Viola Francis. 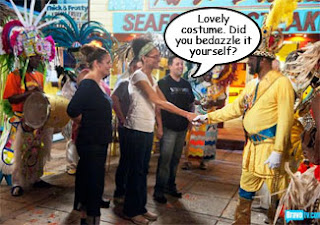 They are told that Junkanoo is a celebratory event much like Carnivale or Mardi Gras and the chefs are like, damn, we didn't have to get all fancy with our food. Tiffany is pleased because her dish wasn't all that snooty to begin with so it should work really well for this competition. 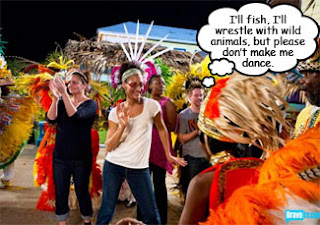 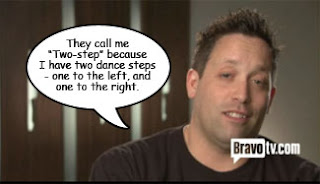 After some dancing in the street, the chefs are put back into their uniforms and led to the kitchen. They have one hour to cook for fifty guests using fairly limited kitchen equipment. First line of business: to start a raging fire in one of the deep fryers. The chefs are more concerned with their food than their lives, but somehow none of them think to put their meat and produce away in the refrigerators and instead leave everything exposed on the countertops while they evacuate the premises. Meanwhile, the fire department arrives and spews foam on everything in sight, a la Marcel, and contaminates all and sundry.

Tom finds the chefs hiding from the fire in one of the dining room's wooden booths. (They're chefs, not rocket scientists.) He has some bad news for them - their food is ruined and they have to prep everything all over again, in a new kitchen. Blais and Antonia take this opportunity to change their dishes to something less-formal, but the other three stick with their original plan. After the kitchen at Twin Brothers is properly hosed down, the finalists return to complete their cooking and serve their food.

Now, with even more limited kitchen equipment than before, Carla is forced to use a portable deep-fryer to cook her pork tenderloins. As with the season 5 finale, she is using a technique that she normally would not use and hopes this time it will turn out for her. However, her loins turn out rare in the middle so she must slice them into portions and finish cooking them on the flat top. When she serves her dish, the judges think her accompaniments of apple and sweet potato are too sweet (Ripert keeps insisting that they are more like "dais-air" than an entree), and Gail's pork is indeed rare in the middle. 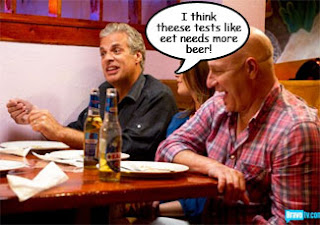 Antonia has decided to make a more homey dish of  shrimp and grits, but overcooks her shrimp and adds the unnecessary and unpleasantly-stringy texture of pork shoulder to her grits. Ripert compares her slaw garnish to something one might find at Howard Johnson's. Yeah, I'm sure Ripert goes to HoJo's all the time - probably a big fan of the clams.

The Douchemeister offers his original dish of chicken, cooked sous vide, with lobster hash. The judges call his dish "surprising" and "a dish fit for a king." Gail nitpicks and thinks his breast is dry. I think, with that wingbone sticking up in the air, that it looks like roadkill. Or Beetle Bailey after a run-in with Sarge. 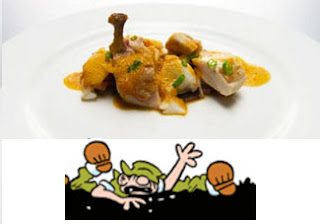 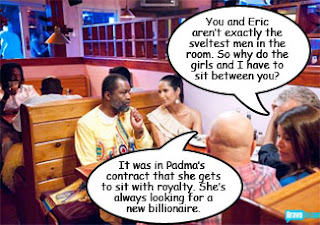 Finally, Tiffany brings out a spiced pork tenderloin with dirty rice, curried slaw, and tomato ginger jam that the judges call "unexciting" and "dry" and "needing sauce" and "maybe if you call something 'curried' you should use some curry."

Eventually what turned out to be a very long day is over and the chefs head to a very swanky stew room to await their fates. Padma calls all of them out and they are told that the meal as a whole missed the mark. Douchenberg made the best dish of the evening, with Blais coming in a close second. The three ladies are left to be judged. Carla and Antonia got the harshest criticism, and it was sad to realize that one of them would be leaving. Even sadder to find out that it was Carla. 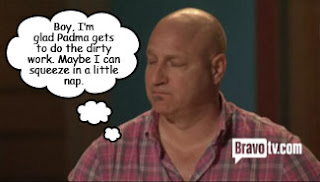 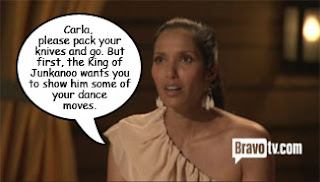 Next week: the finalists go swimmin! Potentially seeing Doucheface in a thong makes me glad I won't be around next week. That's right - if there's a recap, it will be LATE. I'll try for Friday though. Stay tuned!
Posted by theminx

I'm sad to see Carla go, she is one of my favorites. I just saw a commercial for a new cooking show called "Marcel's Quantum Kitchen" starring one of the biggest TC douchebags of all, Marcel. It's on SyFy of all channels.