Can you believe that I've lived in Baltimore for 44 years and had never experienced Andy Nelson's bbq? Until now, that is.

After our marathon cookie-baking session a few days before Christmas, Mr Minx, my brother, and I were trying to think of a place to grab some dinner. Somewhere not in the vicinity of the Towson mall and the insane traffic situation that was bound to exist in the area. I was pushing for sushi, but somehow we simultaneously decided that ribs were the perfect post-baking food. Mr Minx and I retold our tale of disappointment at the Charred Rib, and we briefly contemplated Razorback's (very briefly, as it is across from the mall) and the Corner Stable. We ultimately settled on Andy Nelson's, down the road from the surprisingly-desolate-for-Christmas-Week Valley View Farms.

Former Baltimore Colt (that's right, Baltimore Colt) Andy Nelson serves real barbecue, not just cooked meat with sauce on it. The meat is hickory smoked until tender, and sauced or not.

We went for a full slab of dry-rub ribs... 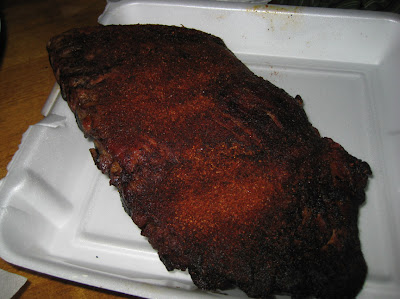 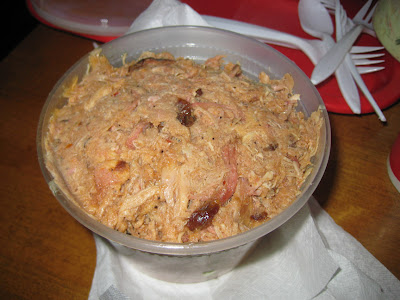 and cole slaw, BBQ tater wedges, and cornbread as sides. 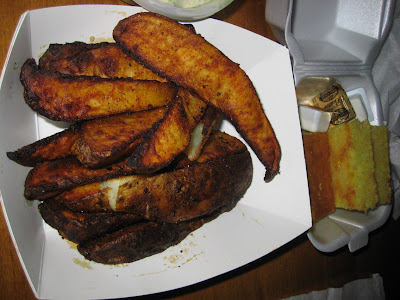 I'm used to falling-off-the-bone, porky-tasting ribs. I think the ones I make are some of the best, but I understand that for purists, they aren't 'que. The ribs at Andy Nelson's have more of a "chew" - the meat must be manually (or dentally) separated from the bone. It's still very tender, however, and sports a bright pink shade from the hickory smoke. The flavor was almost a bit like ham. The dry rub was heavy on the paprika and not at all sweet, but I didn't think the meat necessarily benefited from a dribble of sauce. It was fine as is. Next time we'll definitely taste the wet style, for comparison's sake.
The pulled pork had a vinegar-based sauce and was nicely tangy. The sweet-ish cornbread was in perfect contrast, but I also enjoyed the non-sweet cole slaw that reminded me of my grandma's. The huge potato slabs were well-seasoned and nicely fluffy on the inside. Next time we try the potato salad. And the collards. And definitely the brisket.
And I definitely won't be waiting anywhere near as long for that next visit.
Andy Nelson's BBQ
11007 York Road
Cockeysville, MD 21030
Phone: 410-527-1226 • Fax: 410-527-1167