I was in the mood for bbq today, so I braised some bone-in country-style pork ribs on top of the stove, glazed them, and popped them in the oven.

I initially consulted my copy of Steven Raichlen's book, Barbecue!: Sauces, Rubs, and Marinades for a sauce recipe, but when I saw that many of them were just combinations of sundry ingredients, I decided to make up my own recipe and clean out the fridge at the same time.

To about a cup of ketchup I added about 1/4 bottle of leftover Trader Joe's red chile sauce, a scant tablespoon of mystery Thai curry paste (could have been Massaman, could have been yellow), a quarter cup of brown sugar, the juice of half a lemon, the last few tablespoons of red wine vinegar, a couple squirts each of Sriracha and gochujang (a Korean hot bean sauce), soy sauce and Worcestershire, and some garlic powder. I added this to the about three cups of beef stock used to braise the meat, about 2/3 of the way through cooking (about 2 hours 20 minutes, total). When the meat was tender, I removed the ribs to a foil-lined baking sheet and glazed them with a mixture of ketchup and some raspberry garlic jalapeno jelly I had in the fridge (yeah, I have lots of weird crap in there).
Served with cornbread and a salad, it was quite fabulous, if I do say so myself.  Plus I had less stuff in the fridge and a couple more bottles in the recycling bin. 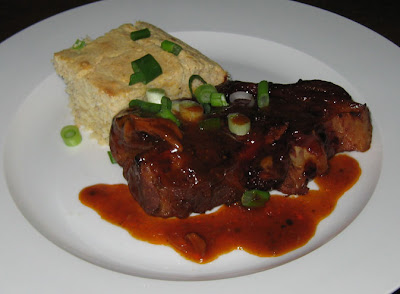 Since the sauce is pretty much impossible to replicate, I thought I'd include the easy cornbread recipe instead. :)
Cornbread
2 cups cornmeal
4 t baking powder
1/2 t salt
1 1/2 cups milk
1 egg
2 T veg oil
Preheat oven to 450F.  Mix dry ingredients in a large bowl.  Add milk and egg and stir until everything is incorporated.
Place veg oil in 8x8 or 9x9 square baking pan and place in oven for a few minutes to get the oil hot.  Add the batter and bake for 25 - 30 minutes or until done.
I added 2 scallions, chopped, and 1/2 cup of cubed cheese (Jarlsberg, because we have an abundance of it), plus about half a teaspoon of smoked paprika to the batter before baking.  And I will sheepishly admit that I saw Rachael Ray do the same thing (plus bacon) to a box of cornbread mix recently.
Posted by theminx