Our first choice for Restaurant Week eats was RA Sushi, on Lancaster Street in that odd neverland between Harbor East and Fells Point. After hearing that the place didn't take reservations and that it could get crowded, we opted to go early. Lucky for us, we arrived during happy hour, when they offer half price appetizers and sushi; the restaurant week menu didn't take effect until 7pm. As it was, we ended up eating exactly what we wanted for about $10 less than if we had chosen the restaurant week menu, plus beverages. 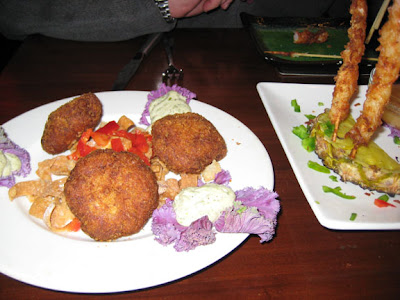 We started with two half-price appetizers, both also offered on the RW menu. On the far right are the coconut shrimp tempura. This consisted of four small shrimp that had been tortured onto skewers, breaded and fried. They tasted of fried breading. The dipping sauce, billed as "roasted pineapple" tasted of boiled-down pineapple juice with a vague bell pepper flavor. Ick.

The blue claw crab cakes were an abomination. Three mushy, bready, pucks were served with an odd mixture of broken Chinese fried noodle snack thingys and chopped bell pepper with a touch of vinegary sauce, and dollops of mayo on small purple cabbage leaves. The mayo was quite tasty; it had a minty quality that may have been shiso. But I have an active imagination. 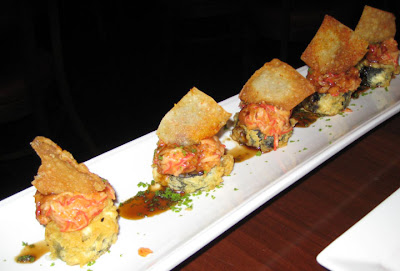 This is the Viva Las Vegas, which the menu describes as "kani kama and cream cheese rolled in rice and seaweed lightly tempura battered and topped with spicy tuna crab mix and sliced lotus root finished with eel sauce and spinach tempura flakes."  What it was: crunchy on the bottom, mushy on the top. The topping was like a seafood salad of sorts, although entirely too smooth-textured. I have no idea where the lotus root was - I suspect the fried wonton garnish stood in for that more esoteric ingredient. 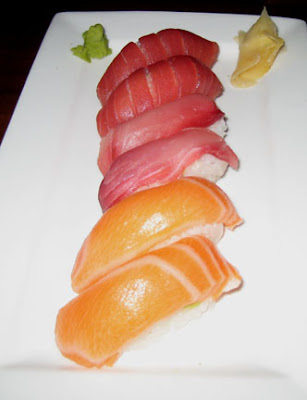 A couple varieties of nigiri were half price as well. We choose our usual tuna, yellowtail, and salmon. The pieces were appropriately small, and the fish was nice and fresh. Used to the largesse of other sushi restaurants, I was surprised at the tiny amounts of wasabi and pickled ginger (two slices) served at RA. 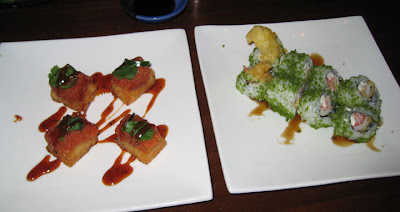 We also tried the crispy calamari roll (right), with tempura calamari, crab mix (whatever that is) and cream cheese rolled in the usual nori and rice and topped with spinach tempura flakes, then drizzled with eel sauce. The calamari was tender, and the roll tasted fine, even if there might have been just a bit too much cream cheese.

On the left is the best dish of the night, so good we ordered it twice: crispy spicy tuna. It was a tuna tartare of sorts with soy chili sauce, served on top of crisp-fried sesame rice balls, garnished with a cilantro leaf and a sliver of jalapeno. It was a marvel of textures and temperatures - the warm crispy rice reminded me of the crust at the bottom of dolsot bibimbap, all chewy and crunchy. The tuna was chilled and tender, lightly spiced, and delicious. I could have eaten another two orders of this and skipped the whole rest of the meal and been very happy.

With two $4 saketinis (mine) and one $3 Sapporo (Mr Minx's), our bill came to $51 + change. RA's happy hour runs from 4 until 7pm, and I can't imagine coming here at another time to pay full price. RA isn't far from where I work, so I can see us dropping by for an early sushi dinner on a regular basis.