The Next Food Network Star - Episode 2 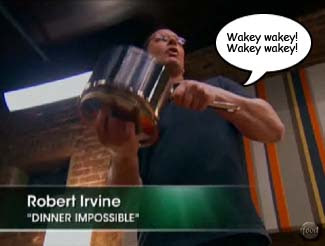 Former Food Network "Star" Robert Irvine, in addition to being skilled in the ways of resume exaggeration (a.k.a. lying), also knows a little about lock picking. Sneaking into the Carriage House, he decides to have a little fun and wake the Wannabes... 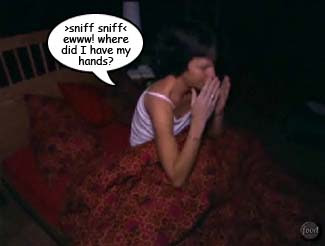 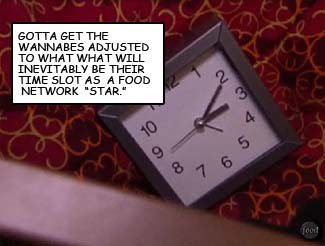 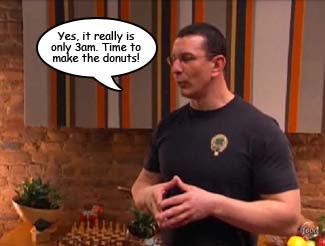 He's actually there to give the Wannabes the Most Ridiculous TNFNS Challenge Ever: 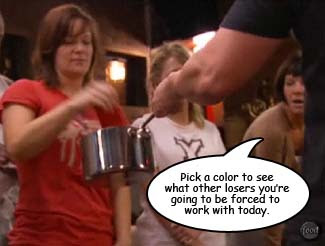 Select a team color from the pot, brush your teeth, and head out on a scavenger hunt of sorts. First you go to a venue on the list. There you will be asked a food-related question. If you get it right, you may select one of three food options and head on to the next venue. If you get it wrong, then you must do a food-related prep task. 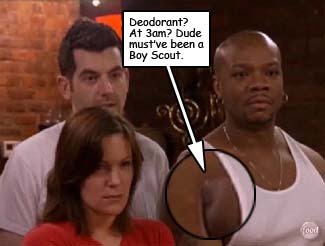 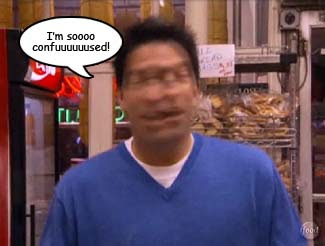 The first location is Amy's Bakery. The green team (Jeffrey, Kelsey, Kevin) arrives first and is asked, "To make white flour, what two things are removed from wheat?" As theminx shouts "bran and germ!" at the screen, Jeffrey stammers, "hull and husk." BZZZZZT! Wrong answer! Kevin then has to go ruin some perfectly good baguette dough. Once that's complete, they get to choose a loaf of bread. Wait, there's only one left because the other two teams got their questions right? Damn...stuck with raisin semolina. 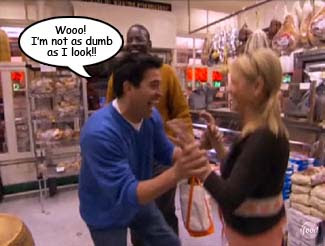 The next stop is Alleva Dairy where the questions are on the easy cheesy side, and Esposito's Meat Market where two teams get their question wrong and have to break down three chickens into 8 portions each. 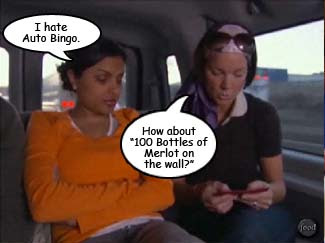 Back in the vans, the teams head to an exciting and mysterious place in the bowels of New Jersey. 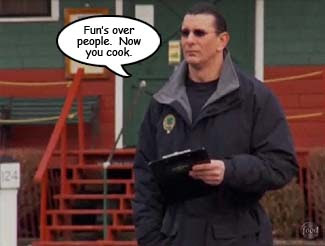 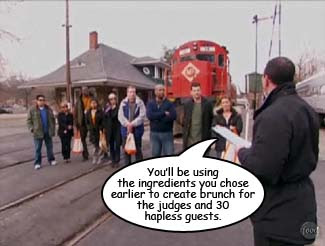 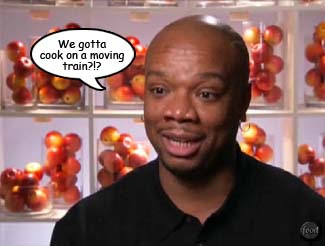 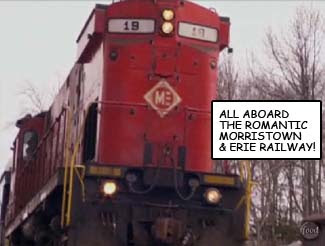 Team Gray (Aaron, Adam, Jennifer) go first. They have chosen brioche, ricotta, and steak. Jennifer makes French toast with the brioche and a ricotta topping, Aaron is taking the steak, and for some reason, Adam is insistent on making eggs. Aaron is all "don't make runny eggs!" so Adam decides to make runny eggs. 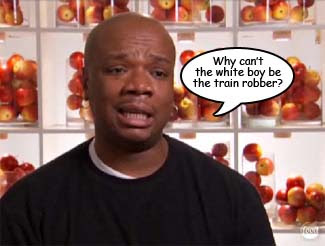 In addition to cooking for the judges and 30 guests, each team must also present their meal to the group. Adam decides that he and Jennifer should go out first, then Aaron should burst out of the kitchen like a train robber.

Despite his reservations about Adam's brilliant plan, Aaron puts a handkerchief over his face and grabs a six-shooter and dazzles the judges with his energy. They love his steak too. Jen's French toast is a little bland. And the eggs don't go over too well. 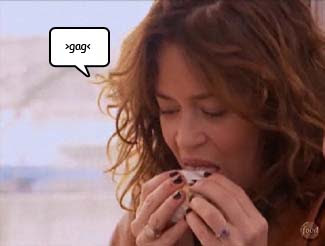 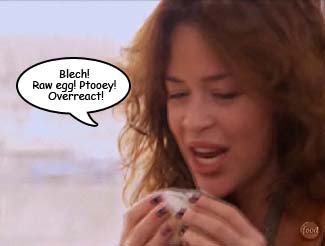 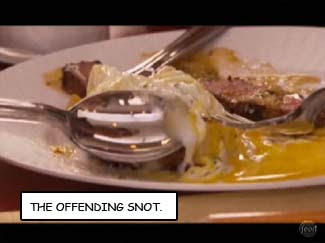 Next up in the kitchen we have Team Blue: Lisa, Nipa, and Shane with lamb, baguette, and bleu cheese. Lisa makes French toast, Nipa some spicy lamb kebabs, and Shane goes for a salad with bleu cheese. The lamb is waaaay too spicy, the salad is overdressed, but Lisa's pain perdu is a big hit.

Finally, the Green team takes over the kitchen. Jeffrey makes tough bread pudding, Kelsey goes for duck salad and a bubbly presentation, and Kevin decides to do something romantic with the bread: crostini. Yeah. Not so sexy. And the judges think it's too sweet, "like candy." 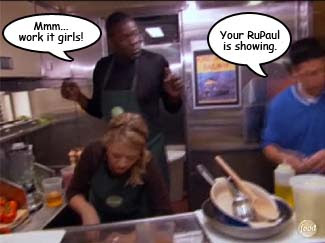 After everything has been presented, the Wannabes are booted off the train and sent back to the Carriage House to await their fate. The Lawfirm of Fogelson, Tushface, and Flay are joined by Robert Irvine to belittle the Wannabes and make them cry. Nipa volunteers to shed the tears this week with her mini meltdown. She thinks it's all much harder than she anticipated. Calm down - these stupid team challenges on a train are nothing like what you'd face if you had your own show. But...she doesn't hear me, says, "I'm sorry, I can't do this anymore," and leaves the judging room. 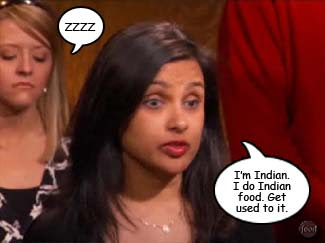 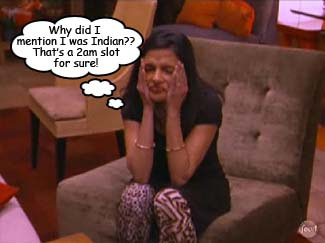 She comes back after realizing she was acting like a moron and that she's really the only chance of ethnic food making an appearance on TVFN. Even if it will be in the wee hours of the morning.

The Wannabes who performed the best in this challenge get a bonus: a feature in USA Weekend magazine. Big woo. They pretend to be excited. And the winners are: Lisa, for her French toast and for not mentioning her 3Cs again; Aaron for his tasty steak and for pretending to be a train robber. I think the only reason Adam didn't get booted this week for his snotty eggs is that it was his idea that Aaron fake a life of crime.

The other Wannabes are safe from elimination, apart from Nipa and Kevin. Nipa's lamb was too spicy and she didn't show any enthusiasm. Plus the meltdown made Susie wonder if she could handle the pressure. Kevin's crostini just plain sucked. 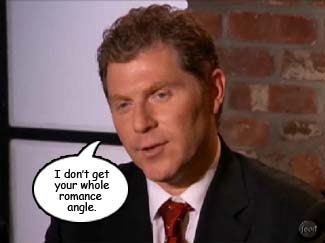 Decisions, decisions! Rather than be called racist, the judges decide that the white dude should go. Buh-bye Kevin! 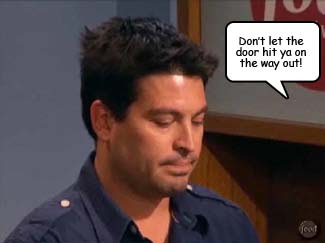 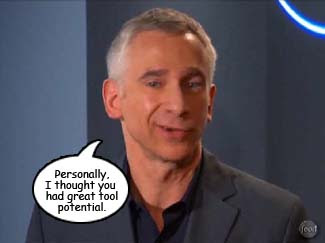 Minx, you are so funny, and you know how to make the litle comic-strip photos. May I add that my text commentary on TNFNS might be a worthy addiion for alert reders? I keep it at http://www.annienewman.typepad.com

I have a big problem with what I perceive as 2-faced opinions by the 2 FN marketing wonk judges. For instance, this week, they accused one guy of being 'too funny, not serious enough', while out of the other side of their mouths convicted the female comedian of being 'too dark, not funny enough'. Make up your minds, people. I know they're looking for a television personality first, a cook second, but food is not necessarily ironic, which is the major basis for humor. I'm not thrilled with the whole concept of this show, it disturbs me to see the false challenges. FN should look for people who have accomplished something in their culinary field, then worry about personality later. Not every cook/chef can be all things to all people. -Victoria