The Next Food Network Star - Episode 5

This week's episode starts out with the wannabes getting ready for the day's challenges. Adam does push-ups while commenting that he needs to "rock." Aaron says there is "danger" every week. And Lisa only needs to work on her on-camera persona. Hmmm...isn't that the most important part of the game? Besides rocking and danger, of course.

In the Food Network kitchens they are greeted by Cat Cora, one of the many FN chefs who are celebrities for absolutely no reason at all. Kinda like Paris Hilton. 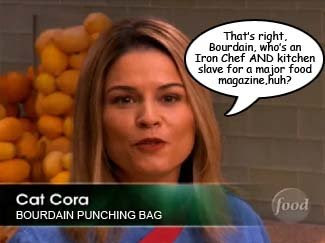 She gives the wannabes their first challenge: create an original dish in 30 minutes with the 6 ingredients found in the 6 baskets in front of them, then be prepared to describe it in detail in a 90-second on-camera spot. Aaron gets a little nervous: "I'm not a camera person." Seems like he's suffering from the same delusions as Lisa - that one can be a TV star without having to be on-camera.

The wannabes cook and practice their spiels about their dishes. But Cat throws them a curveball: they have to describe their neighbor's dishes, not their own.

Shane and Kelsey switch. He does a pretty good job of describing the flavors in her dish. She doesn't fare so well, as there seems to be a lack of adjectives in her vocabulary. And she doesn't seem to know the difference between citrus peel and habaneros. 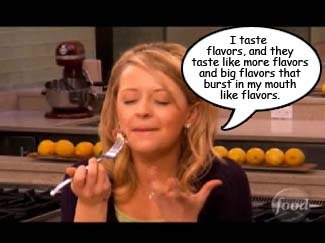 Adam and Aaron switch. Adam thinks it's better to show off the capacity of his mouth than to speak coherently about Aaron's cake preparation. 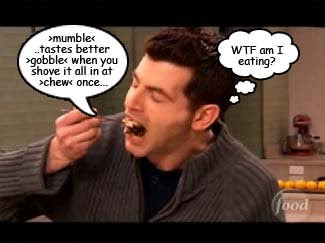 Aaron, on the other hand, prefers not to say anything at all. For the first 60 seconds. 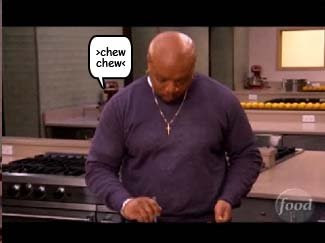 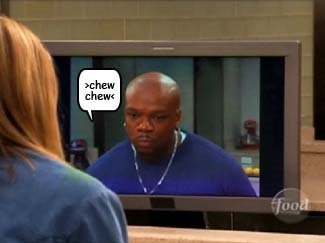 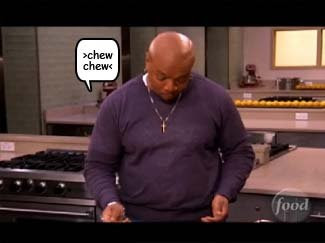 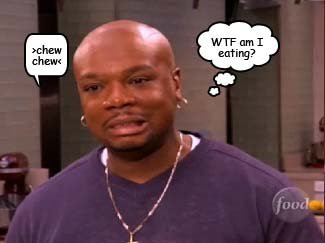 Then he still doesn't say much.

Lisa doesn't like to make eye contact with the camera, but she does a better job than usual. Not that she's any good, but she's a real pro compared to Jennifer. 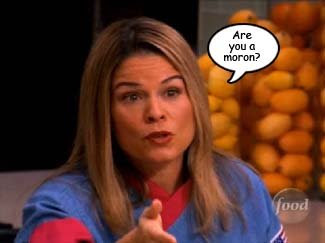 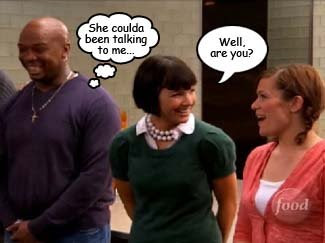 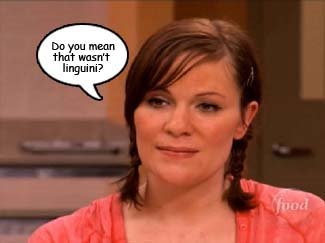 She couldn't tell the difference between udon and linguini, despite the obvious visual difference in thickness and shape. Not a bastion of food knowledge here.

Shane pretty obviously did the best job and was given the win for this challenge and an advantage in the next one: to take a complicated dish and make it accessible to home cooks, from grocery bag to table in 45 minutes. Cat Cora's boss at Bon Appetit, Barbara Fairchild comes in to tell the wannabes that the winning recipe will be featured in the August issue of Bon Appetit. And the crowd goes wild! Better than shitty ol' USA Weekend!

The wannabes are to work in pairs for this challenge, the same team-ups as in the previous description challenge. Shane's advantage is that he not only gets to pick which dish he and Kelsey will work with, but also to assign dishes to the other two teams. Much to Kelsey's delight, Shane picks Beef Wellington. 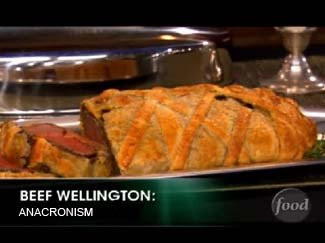 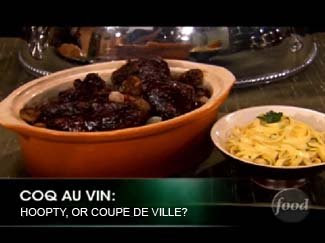 He assigns the Coq to Aaron and Adam. 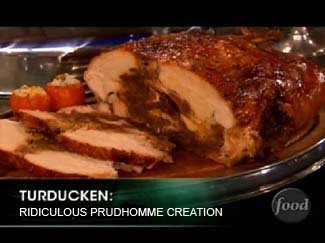 And Lisa and Jen are stuck with turducken.

The wannabes get 30 minutes to shop. Then they tote their ingredients to Cafe Gray in the Time Warner Center to prepare their dish for the judging committee, Cat Cora and Barbara Fairchild, and the staff of Bon Appetit magazine, including the poncy Andrew Knowlton who still seems to be deathly allergic to parting his hair neatly.

Aaron and Adam go first. They bought two kinds of chicken; Adam picked bone-in, skin-on breasts, and Aaron thought more carefully about the 45-minute time limit and bought boneless, skinless breast fillets. They used both, when Adam realized some time into the cookery that there was no way those bone-in pieces would be done in time. He remembered that raw poultry products didn't go over too well with Susie Fogelson in the past and didn't plan to make that mistake yet again. 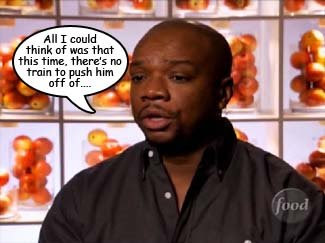 They served their breast fillets with a spicy sauce and two side dishes: polenta and pasta. Is coq au vin Italian? I didn't think so. 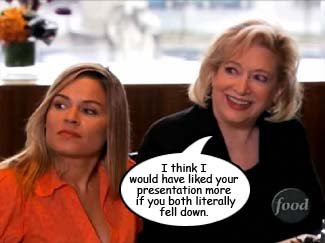 Next up were Lisa and Jen recreating Turducken. A Turducken is a ridiculous combination of partially de-boned turkey stuffed with a de-boned duck, in turn stuffed with a de-boned chicken. Deboning takes a long time and lots of skill, and cooking the resulting monstrosity through takes some time. I say throw out the tur and the ken and just serve the tasty part - the duc. But Lisa and Jen make a deconstructed version with turkey cutlets that will be served with a stuffing containing duck sausage and roasted chicken meat. And Lisa cleverly has one confitted duck leg that she plans to use for flavor enhancement. That is, until Jen gets near it. 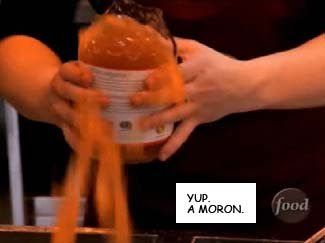 Yeah, when I can't get a jar open, I do tap the lid on the counter to loosen the suction. But I don't smash it Hulk-style on the COOKTOP. Glass went everywhere, including on Jen's acorn squash side dish minding its own business on the grill, and that beautiful confit. It all went into the trash. As did Team Moron's chance of winning this challenge. 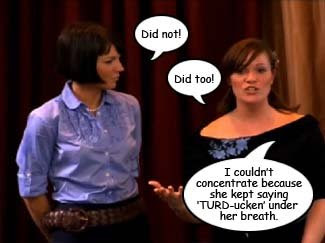 Barbara Fairchild was not impressed. 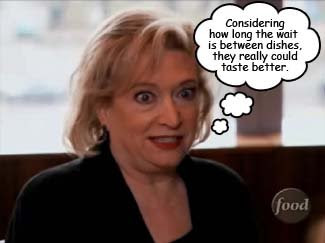 Next, Shane and Kelsey get to show their stuff. Beef Wellington is the easiest of the three to make quickly, with sliced tenderloin and frozen puff pastry. Shane prepares a side dish of creamed onions and Kelsey makes her mama's roated Spring vegetables. 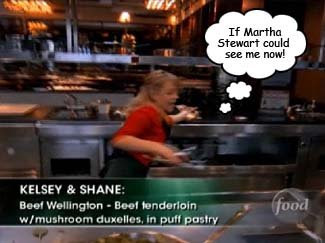 Their "No Nightmares" Beef Wellington presentation went well, apart from the comment that they made the dish in culinary school. The judges don't need to be reminded that Kelsey is so young. 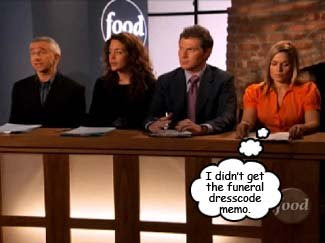 The wannabes head back to the Carriage House and do a quick costume change before judging. We hear Adam lament, "If I make it through, it's not because I did anything good but because I was less awful." But the Food Network loves awful! Guy Fieri has a job, doesn't he? 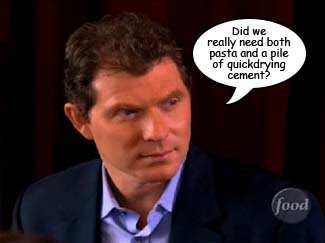 Aaron was told he needs to stop self-editing himself and he said, "well, I was gonna say we took the coq au vin from a hoopty to a coupe de ville...." In that case, Aaron, self-editing was a good thing. France would be in an uproar if you referred to one of their classic dishes in that way. Hoopty or CdV.

Jen was called out for her lack of knowledge in the first challenge, but was told she showed the most confidence ever in the elimination challenge. Lisa got weepy and realized she shouldn't walk around with such a big stick up her butt all the time. She was safe from elimination this week because of her skills and expertise (which really has no place on the Food Network, but whatever). Aaron, surprisingly, was safe too.

No big surprise as to the loser this week: Jen. She lacked culinary knowledge, and I wonder how she lasted this long. Nobody seemed sad to see her go...she ran upstairs, put on her coat, and left, without hugs or goodbyes. Editing...a wonderful thing!
Posted by theminx

And you're right - Jen is a moron, as was so painfully clear last night. I'm amazed at the turn of events for Aaron, the Golden Chef it seems. A few weeks ago I could find no negative comments anywhere about him, and now he's in the bottom three. Go fig.

I am even more impressed at those whippersnappers who are THE toast of this show now. Little Miss Perkyface and a guy with the personality of chalk. But good for Kelsey and Shane all the same. I really think they may go far!