The Next Food Network Star - Episode 4

This week, the wannabes are met at Food Network Studios by Tyler Florence who informs them that their first challenge will be to make 60-second technique videos. Shock! Something they may really have to do on camera if they had a show on TVFN. You know, one of those cooking shows that run at 6:00 AM on Sunday.... 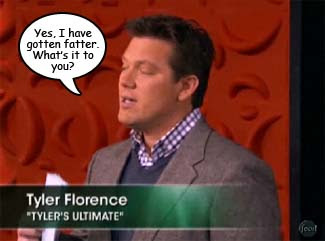 As a bonus, the winning video will supposedly be featured on the Food Network home page. (As of 10:29 AM, there's no sign of promised video.) Of course there's a trick to the challenge: the wannabes have no idea what they will be demonstrating until the camera starts rolling and they start freaking out.

Adam has to break down an artichoke. He doesn't do too badly, but Tyler thought he was funnier than he was instructive. 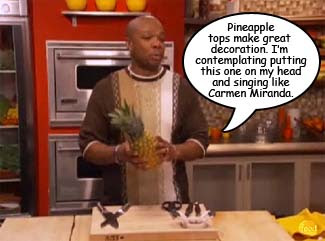 Aaron gets to demonstrate cutting up a pineapple, although he is too involved with home decorating tips and doesn't get past cutting off the top and bottom. Tyler thinks he needs to learn how to cook and talk at the same time, which is kind of the point of a cooking show, no?

Kelsey had to French a rack of lamb chops, which sounded dirtier than it actually was. 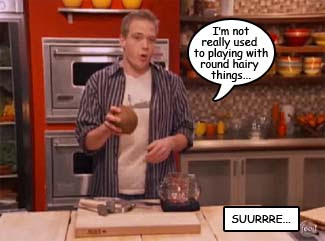 Shane had to open a coconut. He had no f*cking clue as to what he was doing, but he sure made it seem like he did. Bad (or no) technique, but good camera skills. 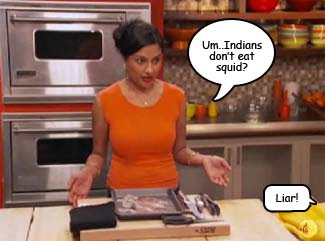 Nipa has to demonstrate cleaning squid, but she got all squeamish and acted like she had a pile of festering turds in front of her. Her mangling of the poor dead squids shocked and dismayed Tyler. 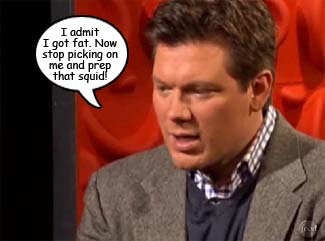 Lisa's duty was to truss a chicken. She was clearly worried about getting chicken juice on her $1000 trousers and did not make love to the camera in the way she should have. 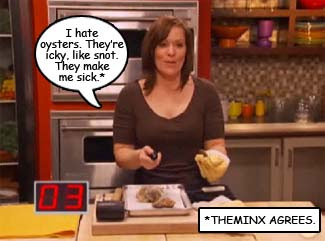 Jennifer, on the other hand, looked directly at the camera and dissed oysters while not doing a very good job of prying one open. 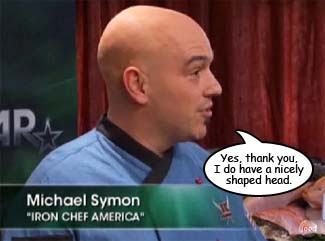 After that debacle, Tyler Florence announces Kelsey as the winner, then leaves to drown his sorrows in his second lunch of the day while Michael Symon steps in to give the next challenge. 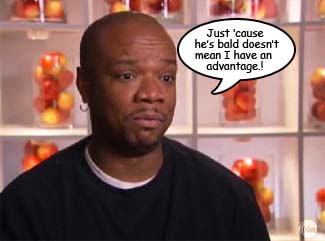 Symon shows off a table full of various fish and introduces the Senior Executive Chef of Red Lobster, Michael LaDuke. I was totally surprised that Red Lobster has chefs of any kind working in their establishment, what with the chum they serve. 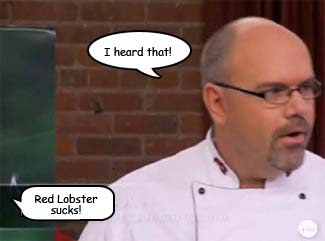 Behind the display of fish was another table... 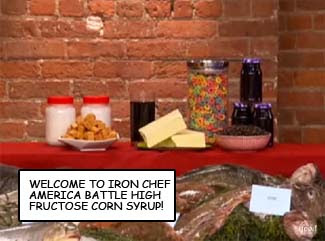 The challenge was to make two fish dishes, one of which required use of a junk food ingredient. The winning dish would be featured on the Red Lobster menu for a limited time. Highly-sweetened processed food products + seafood = something for the Red Lobster "Fresh Fish and Tooth Decay" menu.

As Kelsey won the first challenge, she was first to pick her fish and foul - tilapia and white chocolate. Adam took caramels and halibut; Aaron cola and cod; Jen faux Fruit Loops and mahi mahi; Lisa took Atlantic char and coffee; Shane got sole and marshmallow creme; Nipa was last and got stuck with grape jelly and trout.

She did *not* want to touch that fish, for fear of becoming a lesbian. She cut off one tiny piece and threw the rest of the fish in the garbage, which did not go unnoticed by the ever-vigilant eyes of Michael Symon. 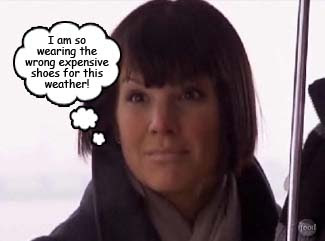 The Wannabes get some time to prep at the Food Network Kitchens, but must then take the food on board a Coast Guard ship and present it to thirty hungry Coast Guard men and women. Again with the copycat Top Chef-type challenge.

Kelsey gets to prepare her chow first. She serves her tilapia as a fish cake and with a white chocolate beurre blanc, and her presentation is remarkably low-key for her. 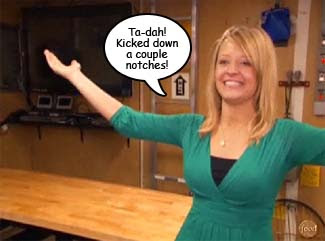 Adam is next and he continues to be the comedian of the group (especially since the departure of Corey Kahaney in episode one). He thinks it's a good idea to trip over the bottom of the doorway into the mess hall. Needless to say, the joke falls flat and everyone thinks he's an idiot. 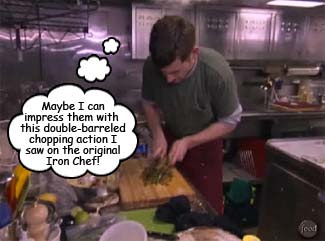 His halibut was overcooked and Bob Tushface calls it a "train wreck." Wouldn't "ship wreck" have been more appropriate for this challenge?

Jennifer does something horrible with Fruit Loops and fish and warns the diners about the potential grossness factor of her dish. Way to make a crowd hungry! 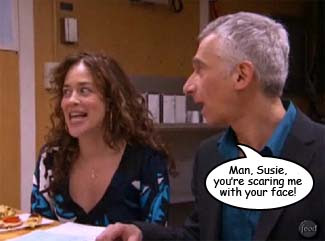 Nipa tried way too hard by adding a little Bollywood dance instruction to the presentation of tandoori trout and trout with a ghastly grape jelly marinade. 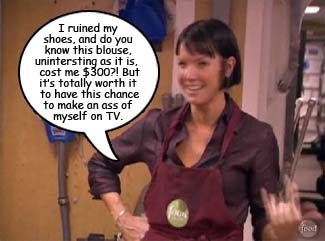 Lisa, on the other hand, is a big hit. She slips on the floor in the galley and spills a container of coffee glaze all over herself. Her presentation is affecting and she cries a little at the end as her brother is currently in Iraq and would be proud of her cooking for members of the Coast Guard. Unfortunately, she made a char tartar, which although fun to say, isn't a dish that would be served to the retirees who eat at Red Lobster. 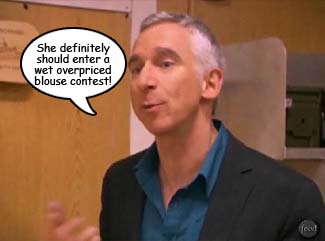 Shane's marshmallow-n-fish dish goes over well, but Aaron's cod is overcooked. And he didn't show enough of himself in his presentation. Note to Aaron - maybe you should just flash them next time?

Once everyone has served their food, they go back to the Carriage House to await their fate.

At judging, we see Michael Symon standing in for Bobby Flay who is probably throwing someone down or doing the ubiquitous grilling. They comment on the Wannabes' performances in both challenges. 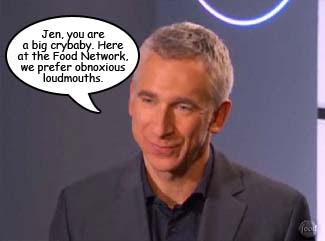 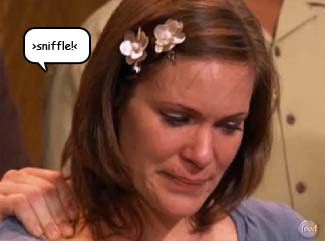 After making a couple people cry (ok, just Jen, but it wasn't for lack of trying on the judges part) Kelsey was announced the winner for having good energy and not forcing herself on the world this week. Plus her fish dishes were actually good. Now lets all avoid going to Red Lobster to try them, shall we? 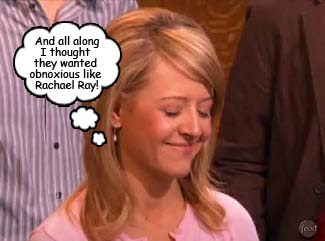 Although Adam's pratfall was "shocking" and his dishes weren't good, Nipa sucked far worse. Symon was actually offended by her mistreatment of the poor trout she mangled. And so Susie Fogelson showed her the door. 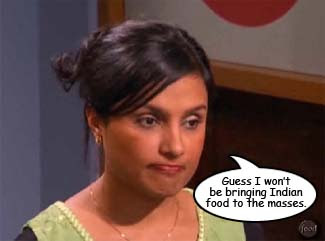 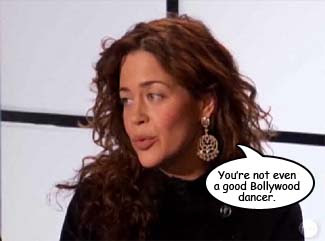