...in which the chefs are confused.

At the top of the show, we see the cheftestants relaxing and exercising at home. 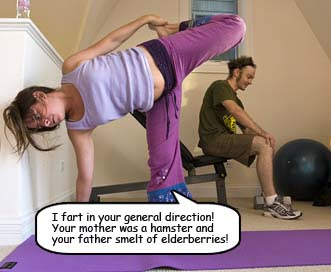 During this fairly gratuitous segment, we see Valerie and last week's winner Stephanie chatting together. Val has a girlcrush and hopes to get to work with Steph in a team challenge. Be careful what you wish for! Dum dum dum DUM!

Next we see the chefs head to Chicago's Green City Market and are told that for this week's Quickfire they have to create a delicious entree using five total ingredients. Salt, pepper, sugar, and oil wouldn't count, but anything else from the Top Chef pantry would. The chefs race around the market to pick up their ingredients. Mark is in such a hurry, he pays for and then leaves a bag of greens at one of the stands. Such mistakes usually spell doom for a chef...dum dum dum DUM!

We see two separate cases of Chef Confusion during the Quickfire. First there's Richard, who can't tell the difference between a chicken leg and a chicken wing. The whole time we see him cooking wings, he's calling them "legs."
Click image to enlarge

Now, I should probably give him the benefit of the doubt. Who knows how long it was between the time the cooking was done and the personal interviews were filmed? Maybe he forgot that he used wings. This guy competed on Iron Chef a couple years back, so I think he probably does know the difference. Even if Batali beat him.

The second case of Chef Confusion came when Andy misunderstood that "balsamic vinegar" was neither salt, pepper, sugar, nor oil. He exceeded his five-ingredient limit, but it didn't really seem to hurt him. 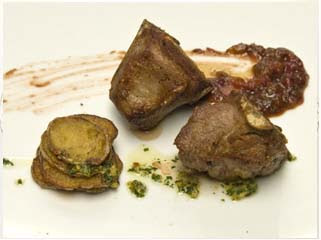 Someone help the boy with his plating. His dish of lamb chops and peaches looks like it had already been tasted. "Decorative" broken smears of sauce on a plate always make me think of skid marks. 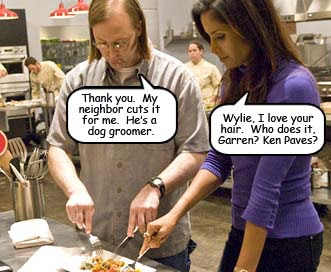 Guest judge Wylie Dufresne and Padma taste the fifteen offerings. We get to see about half of them. Despite leaving an ingredient behind, Mark compensates for it very well and wins the challenge and immunity. And Dufresne complimented his sideburns. Can't beat that.

The Elimination challenge started with the chefs drawing knives from a block. Knife drawing usually means a team challenge, and this one divided the chefs into five groups of three, each named after a different wild animal. Valerie and Stephanie get to work together! Yay! The challenge itself was to cater a staff party for the Lincoln Park Zoo, creating food based on the diet of the animal for whom their team was named: Gorilla, Lion, Penguin, Bear, Vulture.

The cheftestants plan their menus and shop at Whole Foods. For the most part, the teams seem to get along fine, but there's some drama with team Bear. Dale isn't much of a team player, and Nikki is bossy. Unfortunately, there was no real cut-throat action; nobody died, nobody went to jail. Quel dommage. Because bears eat blueberries, Nikki decided to make mushrooms stuffed with them. That said a big "yuck" to me, and that's they way they looked coming out of the oven as well. She suggested waiting until they got to the venue to maybe pretty them up with chopped chives, but Dale considered that to be like "put[ting]perfume on a pig." He decided to add more Pecorino instead, rendering them inedible. Cheese, blueberries, and mushrooms. Quel fromage!

The final case of Chef Confusion is more a problem of pronunciation. 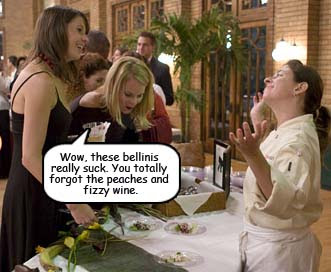 Valerie, Gail, let me help clarify something for you.
Click image to enlarge. 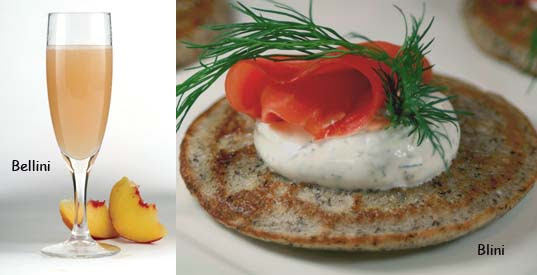 A Bellini is a cocktail made with Prosecco and fresh peach puree. A blini is a little pancake of Russian origin, often served with caviar. Got it? Good. Don't let me hear you make that mistake again. 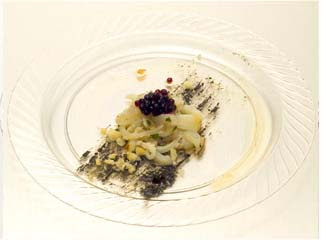 Another skid mark from Andrew proves to be the winner when garnished with a squid ceviche and soy-balsamic tapioca. (He was not penalized for his use of balsamic this time.) Congrats #@*(@*! Andy! 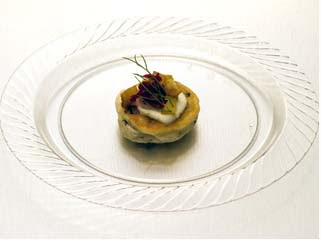 The Bellini/Blini debacle proved to be a mistake not just in name only. Valerie's black olive blinis were obviously too thick, cooked too far in advance, and topped with undercooked rutabagas and fennel mascarpone. As gorillas (her team) are vegetarians, she was fairly set on making a veggie dish. But, would a gorilla actually deign to eat that? At least her teammate Stephanie didn't throw her under the bus (maybe because she was on the chopping block as well for her watery crab salad.) Buh-bye Valerie!

Thanks for the recap. There does not seem to be as many for Top Chef as I see for P-Run. Plus I always think you are funny.