After reading the Amateur Gourmet's blog entry on eating bone marrow at Blue Ribbon, I got a hankering for it myself. Before you go, "yuck," I should tell you that I grew up eating the stuff. My Grandmother's beef soup recipe involved beef bones, and if we were lucky, the marrow didn't fall out into the soup. When we found a full bone, my mother, grandmother, and I would literally fight with sharpened knives for the tasty morsel which would then be spread on buttered rye bread (yeah, the butter was probably overkill; and...I'm kidding about the knife fight).

Mr Minx and I had to go to the warehouse store to pick up a leg of lamb for Easter dinner and while we were there, I scouted around for bones. There were no packages of loose bones, but there were slices of beef shank, and I figured I could cut the meat off and freeze it for a future use. A quick trip to Whole Foods afterwards revealed several packages of solo bones, big ones full of marrow for about $1 each. 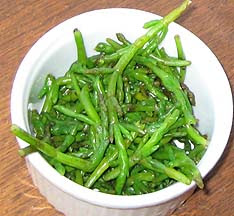 Also at Whole Foods I picked up a scant handful of sea beans. I had never eaten salicornia before, but was curious after seeing them used on Top Chef a couple seasons back. (As a bonus, we spotted John Waters in the produce section.)

Salicornia, or sea beans, are neither a seaweed nor a bean. They are a succulent that grows in marshy areas, with a flavor somewhat like supersalty spinach or asparagus. I soaked them in cold water for a while, then nuked them in a bit of fresh water for a few minutes, then resoaked them in cold. They were still pretty salty, but I thought they would make a good foil for the marrow.

I roasted the bones for 25 minutes at 450ºF. While they were in the oven, I made a large salad with mache, blanched asparagus that was marinated in balsamic vinaigrette, and quartered grape tomatoes. A crusty baguette was sliced, and we were ready to feast.

Witness a slice of bread, spread with marrow, and topped with salty seabeans. As salty as they were eaten on their own, the marrow still needed a tiny sprinkle of Kosher salt. And it was good, if messy (the bones had fat on the outside, which rendered in the oven and oozed over everything outside the oven). 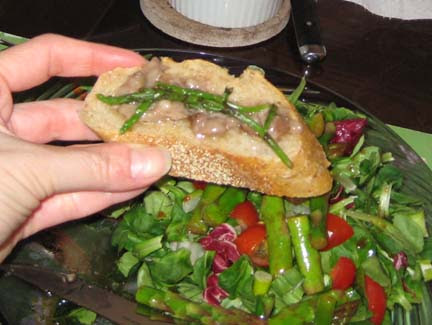 Not a dinner for everyday, as it's pretty rich. Bone marrow tastes like beefy butter. It has a fatty, slightly gelatinous texture, and spreads unevenly. But it is delicious, in a foie gras kind of way. Mmmmmm..... If you haven't tried it, and aren't a squeamish eater, then what are you waiting for? Get thee to the meat department and buy some bones!
Posted by theminx

Reading this is killing me ~ I have some marrow in the freezer, just waiting to be roasted and eaten....So delicious.

I'm sure you won't be shocked when I tell you that its Brad's favorite! He had it at St. John's in London (Bourdain's friend)