The episode opens with evidence of what might be a budding romance between Spike and Andrew as they play a little grabass. There was lots of giggling and touching and next week we'll probably see them both fall out of the same bunk bed. 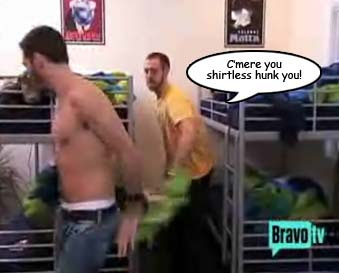 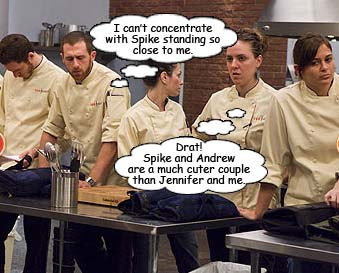 Shenanigans are brief, however, as at 10:02pm, Padma is already announcing this week's Quickfire challenge. When I saw that Rick Bayless of Frontera Grill and Topolobampo was the guest judge, I immediately thought, "ah! Create a new chicken sandwich for Burger King!" But no. The challenge was to reinvent the Mexican staple, tacos, into a fine dining dish. Many of the chefs balked at taking a traditional - and delicious - street food and hoity-ing it up. But they did it anyway. 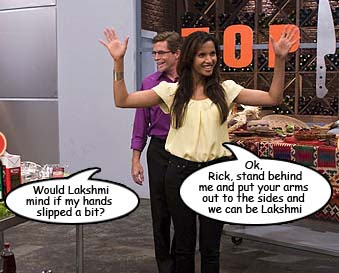 I was especially impressed with Manuel's pronunciation as the cheftestants described their dishes for the judges. I have no idea what he said, but eet sounded bery bery Espanish to me. Then there was this chick Lisa Fernandez who suddenly appeared. Was she in either of the first two episodes at all? Why do I not remember her? She's either going to win this thing or get eliminated next week.

Bayless picks his bottom three dishes. Not surprisingly, Mr Soufflé Disaster Erik's was the least favorite. It was called a "train wreck," but I thought it looked more like the "contents of a baby's diaper." The mysterious Lisa Fernandez and Ryan Idontknowfrompiccata were also on the bottom of the heap. 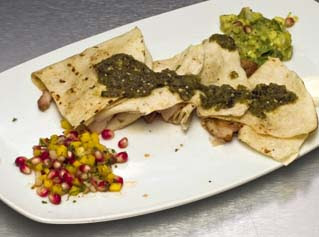 Eric's Diaper Bag Special
While Rick loved Andrews duck tacos, and thought Spike's were "super soul-satisfying," he proclaimed Richard's jicama-wrapped veggie appetizer tacos as the winner. "A beautiful dish," that Bayless plans to steal for use on the menu at Topolobampo, his upscale Mexican restaurant. Gee, Rick, thanks for asking. Can't come up with your own dishes anymore? 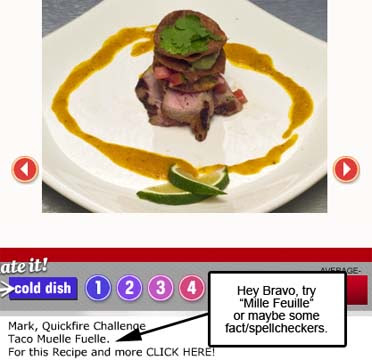 Mark's tacos weren't shown at all in the episode, but I thought they were an interesting idea. Even more interesting is Bravotv.com's spelling of "mille feuille."
At the end of the Quickfire, the chefs divide up into two teams, red and blue. They get into their Toyota Highlanders and head off into the wilds of Chicago, finally stopping in a residential neighborhood where they are given the bad news: the chefs have to prepare food for the neighborhood block party in the "Mealstogether.com challenge."

Rather than hit Whole Foods, the cheftestants are told that they need to do panty pantry raids on the neighborhood houses. The chefs seem to feel strange about doing so, as if Bravo hasn't already warned the neighbors and stocked their pantries for them! 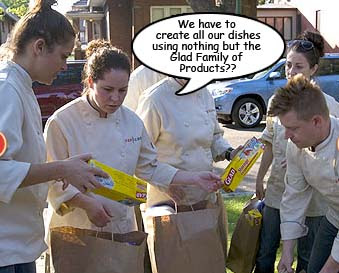 After the awkwardness, the chefs take their loot back to the Top Chef kitchens. The Red team decides to make boring Americana-type staples like corn dogs and hamburgers, and the Blue team decides they will make upscale food, like mac and cheese made with huge boxes of Velveeta. Scary.

Tom struts in for his Sniff 'n' Sneer. When Ryan tells him he plans to use a white balsamic vinaigrette on his Waldorf salad, Tom haughtily informs him that "mayonnaise is what keeps everything fresh." Tom, baby, you've got half the story. Commercial mayonnaise is indeed a hostile environment for salmonella bacteria because of the pH level and sodium content. And why is this? Because the USDA regulates the amount of acid commercial mayo producers use in their product. Acid = vinegar. White balsamic = vinegar. Homemade mayo on the other hand, made with raw eggs and relatively little vinegar or lemon juice, is a concoction that would happily invite salmonella to grow in its creamy goodness. So don't be so smug, Tom, it's acid that does the trick.

So there, you learned something this week.

The elimination challenge involved real teamwork. The chefs tasted each others' food, there was little griping, nobody planned to throw anyone under the bus. They seemed to enjoy working with each other and the kitchen had an overall feeling of friendly camaraderie. Hate that. Where's the crazy guy running around with knives? Where's the pompous dude complaining that there is no proper wine match for Velveeta? 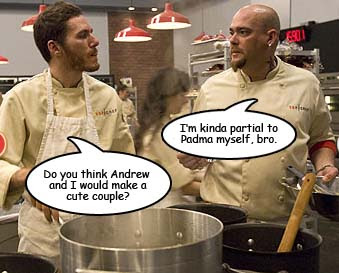 We next see the party in full swing and the neighbors seem to be enjoying the food. Padma, Tom, Rick Bayless, and Ted Allen cruise the buffet and taste the culinary offerings while the cheftestants served food and drank lots of beer. 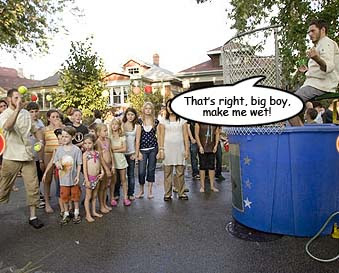 At judges' table, Tom nitpicked Richards paella for not really being paella because there was no top and bottom crust. Well, it was made ahead and reheated, so of course it would lose the crust. He said it was more like a pilaf. Why is Tom so into semantics? Nikki's macaroni and cheese was a disaster, which any chef should have known would be the case to begin with. My mac and cheese is fabulous, but the second day, after refrigeration, it's hard and dry and needs a whole lot more heat than a couple cans of Sterno can produce to bring it back to any sort of life. Despite these complaints, Blue team won, with Stephanie getting the individual win for conceptualizing the dessert and working on the drink.

It was suggested that the Red team dumbed down their menu. Crap like pasta salad (it's hard to make a good one in the first place, and I have no idea why it was so popular in the 80s) and the completely insane idea of making corn dogs in advance were not saved by Dale's innovative and delicious-looking smoked red curry pork skewers. As for Ryan's Waldorf salad? It was panned because the chicken was "too moist." Have you ever heard that complaint in your life? Moist chicken is a bad thing now. I think Tom was just sore because he didn't get a chance to get his Hellman's on. 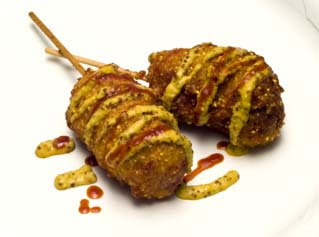 These don't even look particularly appetizing. Turds on a stick.
It was difficult to determine whether the pasta salad or the corn dogs were a bigger faux pas, but in the end, Erik got to pack his knives and go.

Next week: Andrew and Spike take their love to the next level!
Posted by theminx

Maybe Mark's dish was actually supposed to be spelled "Mule Fuel," as in sustenance required by pack animals to get over the mountain.

It annoys me so much that Mr. Top Judge, Tom, has to be so technical about everything - this week it was paella, the first week is was piccata - I mean who really cares at the end of the day - and what happened to taking well-known styles of dishes and making them your own? He is so boring and I find he and Padma very snobby.

I can't wait to see where the Spike/Andrew "bromance" takes us!

As Manuel would say: your recap was MUY BUENO!

Thanks for translating the "muelle fuelle" thing. Those are both Spanish words, but they mean something like "bellows pier". Well, maybe "mean" is not the right verb in this context.