The Next Food Network Star 8.3

This week's Star Challenge is something completely different. Ok, no it's not. It's Chopped, from the basket on down to the judges. And they would be Marc Murphy, Alex Guarnaschelli, and Scott "Doucheface" Conant. 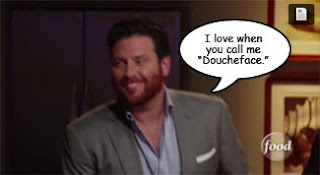 Man, I hope someone serves that asswipe some raw red onions. But no, it's a dessert battle. (Still - why not?) And while one mentors' team competes at a time, it's made clear that the Wannabes are competing against each other. In other words, don't bother cheering for your teammates because they are the enemy. After the basket ingredients are revealed, Wannabes have thirty minutes to create a dish, then one minute to present it to the judges, making sure to add a culinary tip to the presentation.

Team Alton goes first. His basket includes kumquats, Hershey's Kisses, pancetta, and graham crackers. It's a basket of terror for some of the Wannabes. Me, too, since I'm not a fan of Hershey's chocolate.

Martie decides to do something safe and easy: since she's got the chocolate and the crackers, all she needs to do is add marshmallows to make "indoor s'mores." Great name, lame dish. And as in past episodes, once she gets talking, she doesn't shut up. Alton has to tell her to keep quiet more than once. In the end, she doesn't transform the cracker, and the judges puzzle why it took her 30 minutes to make a dish that should have taken 15.

Justin plans on making something that a lunch lady once served him, an unbaked cookie thing with melted chocolate as the glue holding the ingredients together. Only he decides to melt his chocolate without removing the wrappers and then presses it through a china cap to get...about three tablespoons of chocolate. His next move is to hit the microwave, but for entirely too long. His chocolate burns and he has to try again. He also burns his pancetta. What a mess, but the whole time he insists there's a method to his madness. And indeed there is - the judges love his presentation, his tip, and his dish. The Network (Tushface and Susie) think he's fascinating, and a total original. 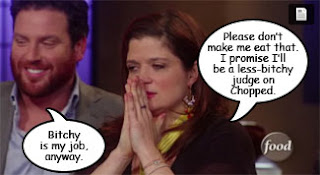 Judson is freaking out because he was once a fatty and now he doesn't get near desserts. So he makes a cornbread thing with chocolate, something as undessert-like as possible while still being sweet. It ends up being undercooked, and his presentation is neither here nor there. 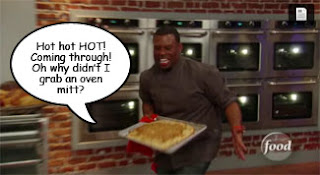 And then there's Emily, the upbeat and optimistic retro gal. She makes cupcakes topped with a spicy pancetta thing and wows the judges. They like her and her presentation, too, but I still think someone is going to call her a "one trick pony" at some point in the competition.

Team Giada is next, and her team has to work with Reese's Pieces (Hershey's must be sponsoring this episode), raw popcorn, coconut, and grape soda. Giada proclaims it the worst basket ever. Obviously she's never actually watched Chopped. On that show, there would be fish sauce in place of the grape soda, and possibly calves' liver.

Ippy is intimidated by the gang of mean-looking, bitchy, chefs he has to face in this challenge. He must be thinking specifically of Douchebag Conant. I know I was. The Ipster makes a tempura using the grape soda in place of seltzer or soda water, which is kind of genius. But tempura Reese's Pieces? It turns out that it works well, except Doucheface doesn't get as many of the chocolate coated peanut butter bits in his tempura as he would like, which makes him pout. 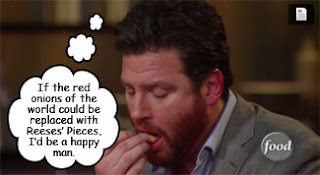 Martita falls flat with her dish, bunuelos. The dish itself is good, but her presentation is a step back from last week, and she seems nervous. Plus, she forgot to deliver the tip. Linkie follows Martita with a pb&j mousse that everyone enjoys. Her presentation is pretty good, too. Zzzzzzzz.

Then comes the trainwreck,  Rawk-n-Roll. He's made aebleskivers, Danish donut holes. When I was a kid, I used to read the Miles Kimball catalog cover to cover because it was full of all sorts of weird and useless gadgets, one of which was an aebleskiver pan. I kinda wanted one, but Mom always said no. Anyhoo, Rawk-n-Roll being Rawk-n-Roll, he couldn't leave the donuts alone and had to Asian them up with some curry-flavored powdered sugar topping. You know, an aebelskiver pan isn't all that different from a Japanese takoyaki pan. Takoyaki are little donut-hole type dough balls filled with octopus (tako). I would have seen the connection, used the candy as the octopus, and called it a day. But he also had to make some tooth-wrecking caramel popcorn containing too many unpopped kernels. He's just a big mess and I can't wait until he's sent home (hopefully before another hour passes! fingers crossed!)

Yvan has been on Chopped before, so he has a distinct advantage (as does Michele, who was also on the show). He does a good job and impresses the judges with his coconut popcorn which Marc Murphy says should be "bottled." Just bottled, Marc, or liquefied first? 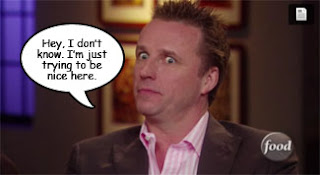 Bobby's Team gets to worth with Hershey bars, pineapple, fresh pasta sheets, and black lava salt.

When they get to cooking, Michele, who is making a free-form pineapple napoleon with fried pasta sheets, notices that Giada is staring at her the whole time. Has Giada never seen a lesbian in person before? Is she wondering about the bleached-blonde spiky hair connection that Michele might share with Anne Burrell? or does Giada have a big old girl-crush on her? 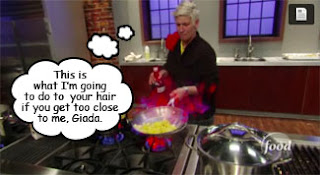 During her presentation, Michele admits that Giada makes her nervous; Bobby and Alton advise her not to let Giada get into her head. I'd advise her to keep Giada out of her pants as well. I mean...look at those teeth!

Malcolm's sugar and salt fried pasta with chipotle chocolate sauce tastes good, but his presentation is a bit flat. Eric annoys the fuck out of us with yet another "hand-crafted" dish. Honestly, the man obviously can cook and cook really well, but I don't want to watch him and his over-inflated ego week after week. I'm hoping he messes up big time sometime in the near future.

Finally, Nikki undercooks a bread pudding mess she makes with challah and pasta sheets...ew. And her presentation comes off as too robotic and disingenuous. Susie says its like an infomercial. Ouch. And, ha ha ha.

After a wardrobe change, the teams show up for judging. There's no winning team this week, but Justin gets singled out for impressing everyone after nearly setting the kitchen on fire. And then Martie, Nikki, and of course Rawk-n-Roll are told that they're on the Chopping block. The Producer Challenge this week involves answering this month's most-asked question from the Food Network Web site: how can one grill without an outdoor grill? The three have 30 minutes to concoct a dish, then they have to tape a one-minute presentation.

This week, they don't seem to get to practice in front of the mentors. They get some advice and go for it, after which they must meet with Tushface and Susie in the Palace of the Glowing Vagina.

They watch Martie's clip first, and she comes off really well. She explains technique nicely, but doesn't say much about the food. And when they taste her bland tuna, they are underwhelmed. Rawk-n-Roll is up next; his presentation is predictably horrid. He has to mention that his bandmates call him the "Rock-n-Roll Sushi Chef." Who the f*ck cares what they call him? He's giving himself this persona that he's not really showing to the camera. He just seems like a boring, middle-aged douche to me. Anyhoo, he makes a Danish meatball thingy with an Asian salad on the side, and it all tastes really great, blah blah yadda yadda. But everyone knows that cooking skills aren't necessary to be a Food Network Star. 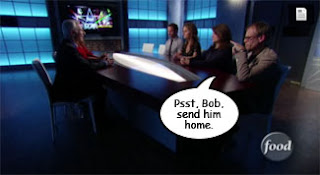 Finally, Nikki hits it out of the park. She's still a bit phony, but she does much better. Tushface even tells her that she went from forgettable to contender in 60 seconds. I think he's exaggerating, but she's much better than Rawk-n-Roll . That's not saying much. 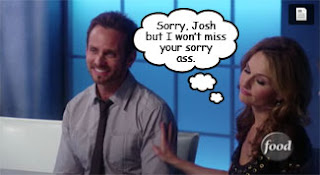 And we know how this turns out. Rawk-n-Roll  is sent home. Thank gawd.

Next week: Fashion Week. Why? What the hell does the Food Network have to do with fashion?