The first time we went to the Black Olive, the prices scared us so much, we practically ran out of the restaurant. The second time, I went for Restaurant Week with my friend Melinda. After having heard so many wonderful things about the place, I expected spectacular. What we got was merely good.

I think my biggest problem with the Black Olive is the outrageous prices. This is not a restaurant that needs to pay for lots of expensive equipment, like immersion circulators and antigriddles. It's a restaurant that serves pretty simple fare. Yet, a bowl of tzatziki - yogurt with dill, lemon, garlic, and olive oil - costs $8. A single, simply grilled fish averages $30. Crazy. But, we still went there for dinner one night.

I figured that if we ordered a series of mezze and one fish dish, we could get out of there without breaking the bank. As it turned out, I was right. The appetizer platter included four spreads (tarama, tzatziki, melitzanasalata, and hummus) with some olives and feta cheese. It was $22 (!), but with a basket of outrageously good olive bread (ok, a basket and a half) it was a meal in itself. Each of the spreads was rich and thick. The hummus was strongly flavored with parsley and dill, the eggplants in the melitzanasalata had obviously been grilled, and the tarama was surprisingly un-fishy. 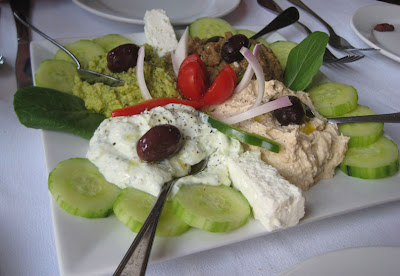 We also tried an order of the bread pudding, made with the house olive bread. It was incredible - soft yet crusty. 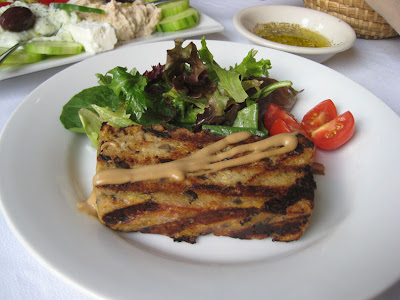 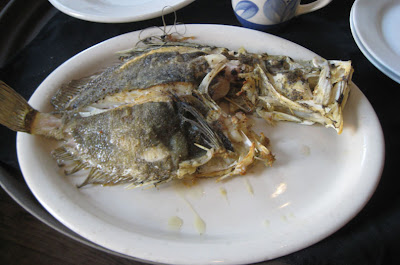 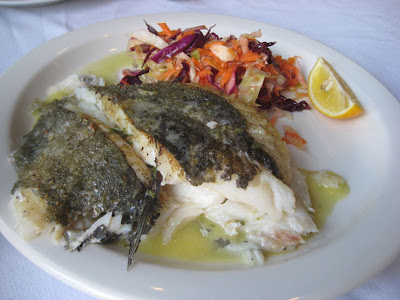 We also ordered the whole St Peter's fish, aka John Dory. It wasn't too pretty after it came out of the saute pan, but after our waiter deboned it tableside, it became a beautiful thing. This fish has a mild, buttery, flavor and a somewhat firm texture. The skin is flavorless, so completely edible. It was served with a simple sauce made from olive oil and lemon juice and accompanied by a very tart vegetable slaw. We really enjoyed it.

We enjoyed everything, actually. And we were very full at meal's end. The bill was $67 - cheaper than other recent meals and, comparatively, worth every penny. We get it now.