The Next Food Network Star 8.1

Ok, I'm going to come right out and admit it - I actually enjoyed Food Network Star last year and have been looking forward to the new season. Especially since they've changed up the format completely. Rather than the doppelganger of Top Chef they've been doing for the past few years, the Food Network has copycatted one of their own shows: Rachael vs Guy Celebrity Cookoff. Except that this time, there are three teams--led by Alton Brown, Giada De Laurentiis, and Bobby Flay--instead of two. And no celebrities (although one could say that of the Celebrity Cookoff, too.)

Why these three? Because they already had done time on NFNS? Was Bobby tired of being the hard-nosed judge? He seemed to get a kick out of mentoring the Worst Cooks in America. Maybe he just wanted more screen time. Maybe he's shopping for another wife?  And whatever happened to the Alton Brown we all knew and loved? When Good Eats first aired, Alton was a bowling-shirt wearing geek. A bit chubby, and attractive in a "I like his personality so I don't notice his looks so much" kind of way. Now that he's slimmed down, his sartorial choices lean towards Southern Dandy, with pocket squares and bow ties and other such nonsense. That's all well and good, but now he seems incredibly uptight. And his face scares me. Then there's the Lollipop. Giada has always frightened me a little. She seems tiny when you look at her alone, but when she stands next to other people, it's clear that her head is humongous. And those teeth. :::shudder:::

Anyway...on to the show. 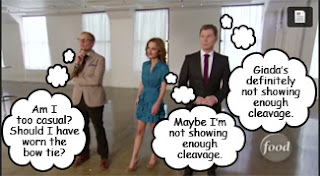 This two hour extravaganza starts off with the audition process, showing snippets of contestants' video tapes. There are also scenes from the big final audition in Bobby's, Alton's, and Giada's home bases, during which they choose five contestants for their teams:

Immediately the Wannabes are thrust into the first Star Challenge of the season. Robert Irvine is there to introduce the task just as a conveniently-placed ad for Restaurant: Impossible pops up in the lower right hand corner of the screen. I see what you did there, FN.

Rather than shake all vestiges of Top Cheffery, this first challenge is basically Restaurant Wars. Each team has to design a restaurant from the ground up, with each contestant responsible for one dish. The teams pow-wow. Alton's team immediately decides on a Southern food theme, with the name "Do South," which makes them seem illiterate. Giada's team pays homage to her Cali roots with their spin on California cuisine in the restaurant "Blu." And Bobby's team goes for a hip and elegant "Tasting Space." 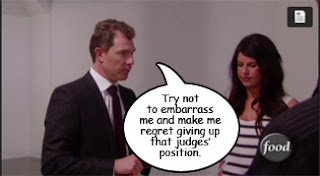 And at the 18-minute mark, we get our first "awesome" of the season.

As per the Top Chef model, members of each team head to Whole Foods and Restaurant Depot to shop for food and decor. One of Giada's team, Josh, is a rawk-and-roll sushi chef who has decided to make dumplings in a dashi broth for his course. Right off the bat, he comes off as annoying and nobody I want to watch on a regular basis. He's part of the Restaurant Depot contingent, and there he discovers that eggs are available only in multiples of 15 dozen, so he calls his team mates at WF and requests three dozen eggs.

Back at the kitchen, Josh discovers that his team mates are morons who forgot about the eggs. Or did they forget? Is he screwed (let's hope)? Find out later.... (Much later, considering it's a 2 hour show.) 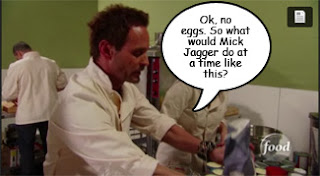 The wannabes are done with their cooking and are herded to meet once again with Robert Irvine. He tells them that they will be selling their restaurant to diners via a brief live presentation. The Food Network big wigs, Bob Tushface and Susie Fogelson, will also be in the crowd to jeer their efforts.

After fifteen minutes of rehearsal, the show begins with Team Alton. One of his wannabes is a completely adorable blonde name Cristie who is also a bit stiff and nervous. She's the low point of the presentation and is getting a loser edit. Next up, it's clear that Bobby's Team is serious about food but not big on personality. Team Giada's Josh, who is getting an even more loser-y edit than Cristie, somersaults his way onto the stage and does a tacky air guitar thing that makes Giada hang her head in shame. Because he's rawk-and-roll. He reminds me of a Mirror Mirror version of Chris Hanmer, winner of the second season of Top Chef Just Desserts. He even has cheesy Evil Chris facial hair. 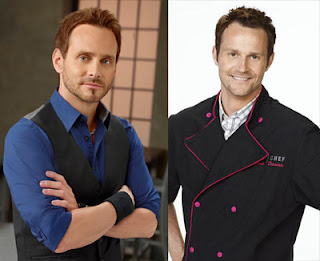 After the diners make their choices, we see the judges take a table in Giada's restaurant, Blu. Josh's soup course comes first, and he's substituted teeny tiny nori-flecked dumplings for the eggy ones he was originally going to make. He's also drizzled some garlic chile oil on the dish, which leaves an unpleasantly greasy feeling in Robert Irvine's mouth. (I'm sure there's a joke in there somewhere.) His teammate, Ippy, fares much better, with his gorgeous and tasty mushroom salad and his laid-back personality. Latina Martita comes out flat. Yuan is just meh. And Linkie, who has the most bizarre Southern US-meets-South African accent (not to mention a funny name), makes a key lime pie so boring, Alton likens it to cafeteria food. Plus, key limes don't come from California. Linkie is a pastry chef - why didn't she use a little imagination and use California citrus?

The judges then move to Bobby's restaurant, Tasting Space. Team leader Nikki uses too many buzzwords in her presentation. Dredlocked Malcom is "not a star" according to Susie. 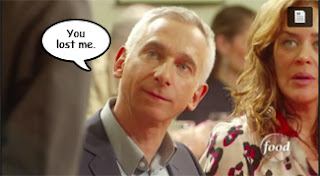 Michele, a spiky-haired lesbian who competed on Chopped a couple years back (and is one of my favorites this season), was bold and confident. Eric, a fussy Asian chubster who insisted on making his own pasta AND ricotta for a mushroom lasagne, made great food but might not be a star. And finally Kara made a great cookie, but her personality was so meh, I don't even remember who she is.

Finally, Bob, Susie, and the gang head to Do South, to dine on Alton's gang's food. Martie, a woman who likes to remind us that she's maybe 20 years older than everyone else, had a good presentation but her deviled eggs three ways needed seasoning. Justin, a very young-looking Hagerstown, Maryland native (go Maryland!) is asked by Giada and Susie if he's wearing lipstick because his lips are so very pink. He says its lip balm, but I think he eats way too much salt. Apparently the girls think he's cute. 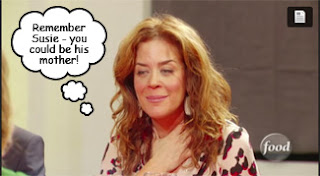 Blonde Cristie brings out a puree of black eyed peas and cabbage because she's one of those healthy eating freaks who thinks oddball combinations of vegetables taste good, even if they do smell like farts. 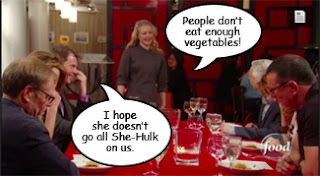 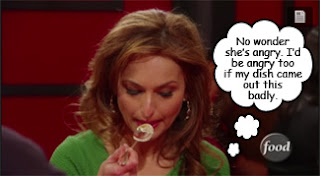 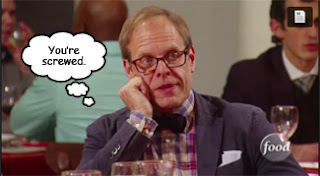 Judson, who's on Alton's team mainly because he favors bow ties, is deemed charming and gracious, and finally, Emily, who's a big fan of the 50s, is called quirky and smart. (They say that now, but mark my words, she's going to be labeled a "one-trick pony" at some point in the near future.)

After dinner, the teams get feedback from their mentors, who are unnaturally kind to them, then they all go meet with Susie and Tushface. Team Bobby got the most positive votes from the diners' comment cards, so they are all safe from elimination. As we could predict from the heavy loser edits they received, rawk-and-roll Josh and angry Cristie are on the bottom, which means they have to participate in what's being called the "Producer Challenge." 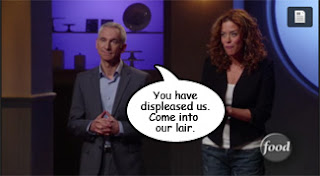 As with Rachel and Guy's celebrity show thingy, the two of them have to prepare a dish of the judges' choosing, but with an on-camera presentation to boot. The theme of this week's challenge is Mother's Day Brunch, so both Josh and Cristie set to working with eggs. Then we see them practice their presentations, really badly, but not film the final take. Because, it's like a surprise. Oooh...suspense!

The two wannabes and their mentors are then ushered into the "Pitch Room," where they find Tushface and Susie behind a giant table with an odd backlit center. I find myself trying to decide whether it is shaped like a coffin, or maybe a giant glowing vajayjay. 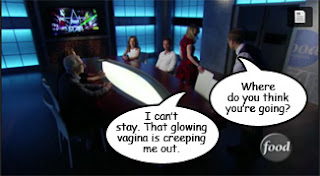 At this point, we get to see the final presentations, both of which, predictably, suck. But after some deliberation, the judges decide to toss Cristie on her pretty little ass and keep Rawk-n-Roll for at least another episode. Ugh. 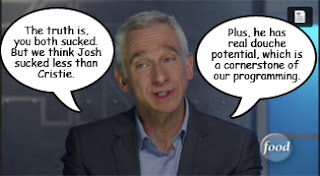 Speaking of sucking, I know this recap does, but I'm out of practice. :) Stay tuned to Minxeats for another 10 weeks of this stuff! Wheee!