The Next Food Network Star 8.2

So...yesterday afternoon, I sliced open my left middle finger on a mandoline. Not while I was using it (neither the finger nor the mandoline), mind you, but while I was putting the device into its box. I have a big bandage on the thing, which makes typing a wee bit difficult, so if you see gibberish here and there in this post, blame it on the finger. And not my brain. Yeah, that's the ticket!

There are fourteen Wannabes left, five each on Bobby's and Giada's team, but only four on Alton's team. Makes me wonder if they're going to eliminate people in such a way that the final three just so happen to represent each of the three mentors. Guess we'll find out.

The Star Challenge this week is a bit complicated. The mentors tell the Wannabes that they'll be New York tour guides for a day, even though most of them don't know a whole hell of a lot about NYC. Each team will be assigned one foodie neighborhood, and each member of that team will have to create a dish inspired by one stop on the tour. Giada tells her peeps they're going to Arthur Avenue in Little Italy. Naturally. Bobby Flay's team is heading to Harlem (because the milk-white Irish Bobby is the first thing I think about when I hear the word "Harlem"). And Alton is going to celebrate his non-existent Jewish roots by taking his gang to the Lower East Side.

The Lower East Side is first on the agenda. Alton takes his Wannabes aside and tells them about the four stops on their tour, asking for volunteers to cover each spot. Martie gets Katz' Deli, Justin takes Kossar's Bialys, Emily takes Streit's Matzoh, and Judson is stuck with the Pickle Guys. At each stop, they get a mini-education about various foodstuffs. Emily pretends to be really excited about Streit's, comparing the room full of machinery and conveyor belts to something out of Willy Wonka. Obviously the girl has never watched Unwrapped. Judson is not feeling the pickles, although I'm pretty sure the man enjoys his pickles.

After the tour, the team goes to the Food Network Star kitchen to whip up something to feed the tourists they'll be encountering later. Ninety minutes later, their food is packed up and everyone gets onto a nifty bus with stadium seating and a giant window on one side. Susie Fogelson and Bob Tushface are on board, as are the mentors and various "tourists." Justin starts off the show talking about his visit to Kossar's Bialys. He seems really enthused about the whole thing, and the tourists enjoy his bialy chips served with smoked creme fraiche and caviar. Susie gushes about how much she likes him. 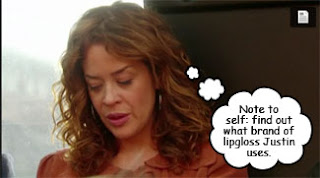 Martie's up next. She tends to ramble when she talks, and it was no different this time. However, her stories seemed to have a point and the tourists enjoyed her take on a pastrami sandwich. Emily, the retro-50s gal, serves her mini meatloaves made with matzoh and topped with what appears to be charoset (a fruit and nut paste typically eaten at Passover) and starts her spiel on the Willy Wonka matzoh factory, when all of a sudden, she feels sick to her stomach. That big glass window is not doing her any favors, and as she struggles to keep the vomit down, she messes up her presentation. Big points off for Emily. 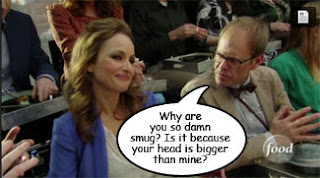 Finally, Judson gives his presentation on the Pickle Guys, which is forced and rather fake. It's obvious he's not into pickles as much as he should be, and Jewish gays everywhere are seriously disappointed.

Team Bobby is next. He tells his group that they are going to Sylvia's, purveyors of soul food, famous for catfish. Michele doesn't like catfish, but she takes Sylvia's anyway. Casablanca meats goes to Malcolm, whose family is from Harlem. The Savoy Bakery goes to Eric, Dinosaur BBQ is grabbed by Nikki, and Kara is left with Melba's, where the specialty is chicken and waffles.

Kara tells us that she doesn't fry chicken or eat waffles. Or eat chicken on the bone, for that matter. She's probably one of those scrawny women so worried about fat that she will only eat boneless skinless chicken breasts. Ugh. WTF is she doing in the food business if she has prejudices against food? 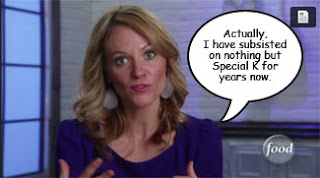 Anyhoo...the gang heads to Sylvia's, then to Casablanca, Savoy, and Dinosaur BBQ. 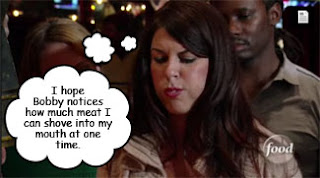 Once they get to Melba's, they are greeted by Melba herself. This woman once beat the pants off of Bobby Flay in a chicken and waffles throwdown. She is gorgeous, serious, smart, and deserves a television show of her own. Hear that, Food Network? As Melba carefully explains the history of chicken and waffles to the befuddled chicken-on-the-bone hater Kara, we at home immediately understand that it's a lost cause.

(Aside: I'm shocked that Marcus Samuelsson's restaurant, Red Rooster, wasn't on the list, since he's such a publicity whore.)

After 90 minutes of cooking, everyone gets back on the bus. Malcolm does the first presentation; he comes off as passionate, and the ribs he's made for the group win raves. Michele takes the stage next. She's out of her element, and clearly lies about her enjoyment of catfish because she told us at least ten times during the episode that she thinks catfish tastes muddy. Honestly, I would feel the same way had I needed to do a presentation about tilapia. Her presentation is bland, and so is her food. 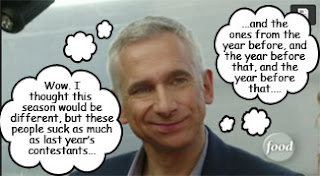 Nikki gives her high-energy spiel on Dinosaur BBQ, but Susie thinks she's rather impersonal. Then overachiever Eric, who's made a cheese turnover with coffee caramel sauce based on the danish and cup of coffee he had at Savoy, wows everyone with both his story and his food. And finally, there's Kara, who does nothing right. First she starts off by saying that she met Melba, who is a "black wo...African-American woman..." and throws herself completely off track. Susie says she is not a star, but I could have told you that. 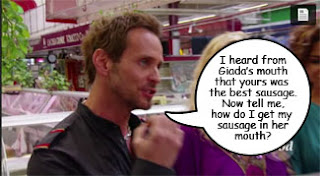 Yvan is first; he's a real charmer, but his skewered mozz and tomato is boring. Half-Italian, half-Hawaiian Ippy does a great job with his story, and impresses the judges with his pasta e fagioli with the flavors of eggplant parmesan. Rawk-and-Roll is up next, and makes me wish I had a TiVo so I could fast-forward through this trainwreck (bus wreck?). He starts a never-ending story about Joe Pesci and Robert DiNiro and my mind goes numb. I'm not sure if he finishes the story or even if it has a point. He's an egobag, a snooze, and so is his food. Martita turns out a likable performance and some of the best ceviche Susie has ever eaten, and finally, Linkie does a great job of converting classic cannoli into a cheesecake.

Honestly, they are all as boring as snot.

Time for judging. Tushface declares Giada's team the winner, with all team-mates safe from elimination. Even Rawk-and-Roll, who deserves to go...soon. Hopefully next week. Then Kara and Judson are told that they sucked and will have to compete in the Producer's Challenge. This week, they have to do something fabulous with the humble potato.

Kara makes mashed potatoes, and Judson does a potato-crusted salmon. They shoot 1 minute presentations with their mentors, and then they all head off to the Salon of the Glowing Vagina for judgement. 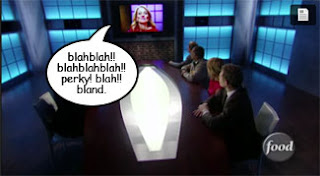 Kara's potatoes are rich and comforting, but not memorable. Her presentation was too cheery (read, fake) for the judges. She reminds me of Jayma Mays, from Glee, with that baby voice, but with one difference: I like Jayma Mays.

Judson's turn. His dish is more about the salmon than about the potato, and his presentation is awkward. The whole time, he talks about being into technique, but then he says he "wrapped the potato with the salmon" at least three times. No, boob, you wrapped the salmon with the potato! I guess technique doesn't include language. We also discover that Judson's a big crybaby. Bowties and Tears. Pathetic. Send them both home. 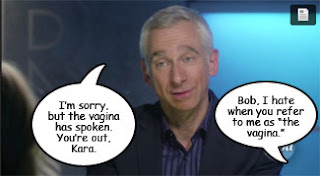 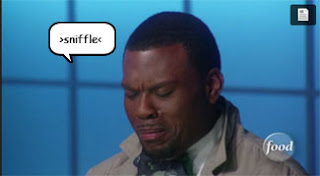