Woman's Industrial Kitchen and Souper Freak truck owner Irene Smith recommended Tooloulou to us. She's been spot on with her restaurant recommendations, so we knew we had to get ourselves to this little hole-in-the-wall on Harford road in Lauraville and have a taste of their Cajun specialties ourselves.

The menu is small, featuring six po boys, four sandwiches, chicken wings, ten pizzas (including  build-your-own), and five sides. I'm surprised the tiny kitchen (which is probably a bit bigger than the tiny dining area) can handle even that amount of variety. The kitchen was a bit slammed when we stopped by for dinner; the Sun's review had just come out and there was a large multi-pizza order waiting to be filled, in addition to those belonging to the several patrons who had walked in before we did. But we were fine with waiting, and so we did.

While we were waiting, we had a chance to peruse the selections in the drink case. Root Beer lovers will be thrilled; there were at least 8 varieties available, including my childhood favorite, Frostie. 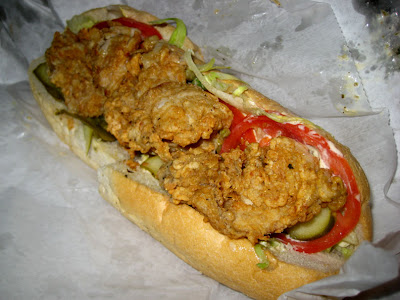 We tried the oyster po boy, which had four fat oysters on French bread. The sandwich was fully dressed with tomato, lettuce, spicy pickles, and Tabasco remoulade. The flavors were spot on, but the texture of the sandwich suffered in the fifteen minutes it took for us to drive home. But juicy oysters beats dry, overcooked ones anytime. 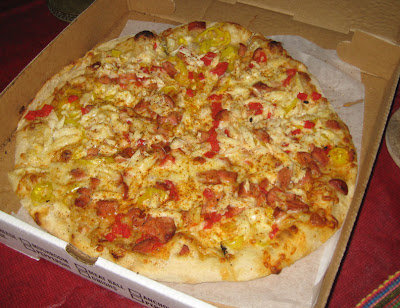 We also bought a 12" Tooloulou pie, topped with white sauce, crab, andouille, banana peppers, mozzarella, and a bit of Old Bay. The amazing aroma tortured us the whole way home and we couldn't wait to dig into it. I suppose because the kitchen felt pressured, our pizza might have come out of the oven a minute too soon, since the crust was a bit on the pale side. Even so, the topping combination was amazing, and there was a generous amount of crab. Really quite tasty.

We need to try their smoked duck pizza now, and despite not liking ham so much, I want to taste that Coca-cola baked ham sandwich served on a jalapeno cheddar biscuit, too.