For my final Restaurant Week outing, I had lunch on Friday at the Black Olive with my friend Melinda who happened to be in town that afternoon. 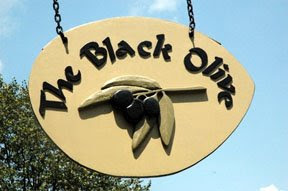 I had been inside the Black Olive, but had never eaten there. Some years ago, Mr Minx and I were going to have dinner with our friend Kate at a Greek restaurant on Broadway. We arrived at our destination only to find that they had gone out of business. As we were in the mood for Greek, and I knew there was a newish place farther into Fells Point, I suggested we meet at the Black Olive.

After a little difficulty with finding a parking space, we met Kate inside the restaurant. She said, "I don't think we want to eat here" and handed me the menu. I took a look at the prices, agreed, and the three of us beat a hasty, and somewhat embarrassed retreat.

I still can't afford dinner at the Black Olive, but I can certainly swing a RW lunch. 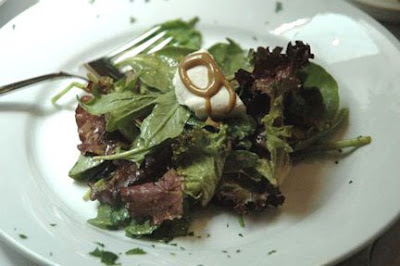 After being seated, we were brought a basket of very good crusty bread and exactly two olives in a little dish. Two whole olives.

For starters, Melinda had the salad of mixed greens with goat's cheese. The menu described it as "Mescaline and baby greens salad mixed with goat’s cheese, tossed with a touch of aged balsamic vinaigrette." Mescaline. Really? We were a bit disappointed not to find the promised 3,4,5-trimethoxyphenethylamine in the salad. Seriously - for the amount of $ charged for entrées, surely they can afford to hire someone literate to spell check the menus? (I've noticed that roughly 75% of all restaurants that serve mesclun misspell the word in some fantastical way, and that drives me nuts. I think it was PaperMoon Diner that spelled it "mesculyn.")

The salad was on the small side, and the vinaigrette got a "wow, that's tangy" comment from Melinda. Really not much else one can say about such a simple preparation. 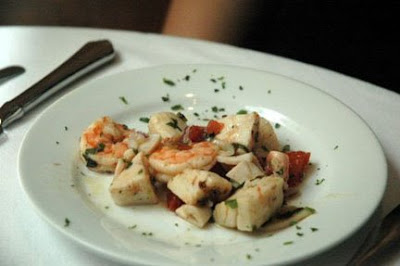 I went for the seafood salad, a combination of calamari, lobster, shrimp, scallops, and octopus combined with onions, tomato and cilantro. I didn't seem to get any lobster. :( The shrimp were a little overcooked, but the other elements were nicely tender. The combo was cool and refreshing on a hot day. 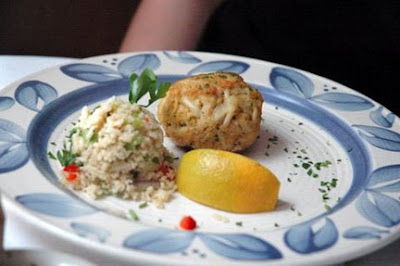 My entrée was the Maryland crab cake, which came with a side of couscous tossed with finely chopped raw vegetables. The crabcake was about average - not a lot of filler, but no lumps, either. The couscous was a nice side, and I enjoyed the crunchy vegetables within. 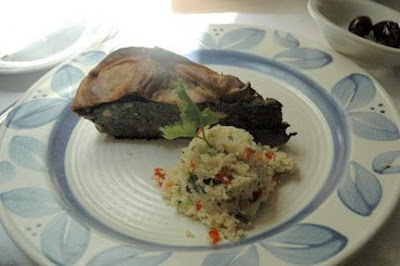 Melinda had the "Village pie," a version of spanakopita with red Swiss chard, spinach, leeks, sheep's milk cheeses and homemade phyllo. It too was accompanied by couscous. Mel had no complaints apart from the extreme overdoneness of the phyllo which made it difficult to cut through. 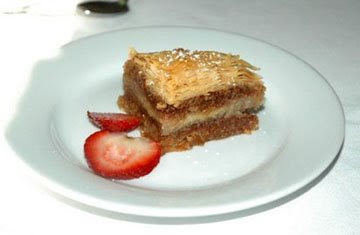 For dessert, we both had the baklava. It was better than diner baklava, but not as good as it should be in a place like the Black Olive.

All in all, I wasn't overly impressed with the Black Olive. Service was good, decor was charming, but the food was only good when everything I heard about the place led me to believe it would be great.

Maybe I'm getting to be hard to please in my old age, I don't know....
Posted by theminx