To Misquote Bon Jovi, You Give New Jersey a Bad Name 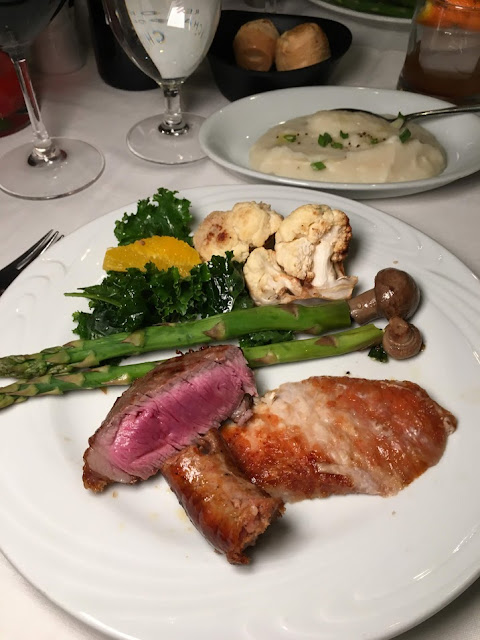 My friend Kim and I were born at the same hospital exactly a week apart, but we didn't meet until high school. Forty-plus years later, we're still friends. We try to get together a couple times per year, and in 2022, we decided a joint birthday celebration was in order. I made a reservation at the Fogo de Chao in downtown Baltimore and waited eagerly for the day we would indulge in a festival of meats.
Fogo de Chao has always been a personal favorite of mine, though I don't think it's as good as the Brazilian bbq restaurant my family would frequent in the 90-00s, Green Field Churrascaria, in Rockville. Back then, $25 would get you a crazy selection of meats, including beef and pork, but also chicken hearts, duck, and sometimes rabbit. The salad bar was loaded with everything from cheese and salads, hearts of palm and asparagus, to various starches and soups. The shrimp and chayote squash soup was delish, and I'd put away a couple bowls of that before I started my meat fest. I once consumed so much protein I ended up with a nasty hangover the next day. Fogo's menu is similar to that of Green Field, minus the weird bits and duck, and they have feijoada rather than chayote soup. I've enjoyed some fabulously tender cuts of beef and flavorful pork there and the bacon-wrapped chicken shouldn't be missed. But I learned something on this most recent visit:
Don't go on a Saturday.
The restaurant was packed. It's a huge space, and every inch of it was filled with diners and gauchos (servers) bearing sword-like skewers of proteins, everyone talking at once. The din was incredible. And if I didn't get COVID after sitting in that space for two hours, I'll never get it.
The best thing about eating at a Brazilian bbq, besides the food, is that there's no wait to eat. Once you get to the table and decide you're going for the full churrascaria experience, you can go fill a plate at the salad bar and once re-seated, the gauchos will begin their parade of meaty goodness. And that still happens when the restaurant is packed. Still, we didn't have an optimal experience--or even a good one. I cannot fault the kitchen, as hot and juicy meats came out in a steady parade all evening. Our waitress was a little slow with the drinks, however, as she waited by the bar to fill several tables' orders--including water--at once. I get it. We were seated in Siberia, waaaay far from the bar. But I needed water. And wine. But mostly the water. I feel like I'm being nit-picky, but when one pays $61.95 per person, not including appetizers, drinks, dessert, tax, or gratuity, one wants impeccable service. At some point during hour two (!), our waitress' shift ended.... <crickets> Fortunately, the somewhat giggly young man who took her place was attentive. More on that later.
(You're probably wondering where New Jersey comes in. I am getting to that. Finally!) 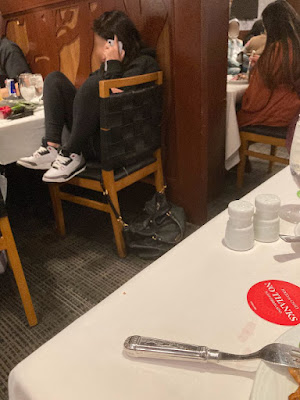 As I said, I am being nit-picky. But there was also a huge non-food/non-service issue that made me somewhat angry. Directly to my left was a table of twelve people who were shouting at each other across and down the table. Not angry shouting, just conversational shouting. There were distinct New Jersey accents involved, and the loudest of them emanated from a female personage at the end of the table. She was on her cellphone for a good 45 minutes, dropping the f-bomb frequently, and get this--complaining regularly about the noise level in the restaurant. THEN GO OUTSIDE, YOU RUDE $@*#! Also, GET YOUR FEET OFF THE CHAIR! This chick wasn't a toddler, or even a teenager. She was at least in her mid-20s, and clearly had been raised by hyenas. The whole group of...individuals...(I promised Mr Minx I wouldn't use the pejorative that initially came to mind, one that might be used to describe folks involved with the manufacture of cement overshoes) seemed ill-mannered, but she was the worst. Part of me wanted to say something, but the rest of me didn't want to end up in the Inner Harbor, swimming with...is there any sea life in that cesspool?...the fishes.
After about an hour of this noise pollution, the group--many wearing hoodies bearing the name of an automotive industry-related company from northern NJ--left. Suddenly, the decibel level of the restaurant decreased. I looked around and saw several other large parties of ten or more, and all seemed to be conversing at normal tones while enjoying their food. I could finally hear my dining companion, who had been as disgruntled as I was while the noisy ______s were next to us. Sadly, they had bothered me enough that my food didn't taste particularly good, even after they left. (I continued to eat, however, to get my money's worth.) I have to wonder if that group was in Maryland because they've already been kicked out of the restaurants in their own area.
Our new waitperson came over to see if we wanted dessert, and Kim mentioned that it was our birthday, angling for a complimentary slice of cake. We were brought a menu so we could choose. Unfortunately, said menu included calorie counts. Did you know that a piece of Fogo key lime pie has 820 calories? Suddenly, I felt very full and thought if I ate pie after all that meat, I'd be sick. I suggested that we share a dessert. When we told the waiter, he exclaimed that we must each choose a dessert because it was our birthday! Then, sotto voce, he said we could take it to go. So we ordered pie to go and requested that the check be split between us. Neither of us are fond of calculating tip, but the bill included calculations for 18%, 20%, and 22% "for your convenience." So we added the 20% amount to our bills and left.
I'm not sure why $99 dollars didn't seem like too much money. And only now that I am writing this blog post am I noticing that the convenient tip calculations were on THE ENTIRE $143 TAB, not half of that. After I noticed the error, we each called the restaurant and asked for a refund of the extra 20%, which they honored.
To add insult to injury, when I got home after that dinner, I found an email from OpenTable claiming that I didn't show for my reservation. With that particular reservation service, it's 3 strikes (or no-shows) and you're out. I've been a member of OpenTable for at least a dozen years and in all that time I've had one no-show, and it wasn't my fault. I would never leave a restaurant hanging like that. When Mr Minx and I got food poisoning on a trip to Los Angeles in the mid-00s, in between trips to the bathroom I called the restaurants at which we had dinner reservations and cancelled them. The reservationist at Spago thanked me and said few people bothered to cancel. They just didn't show up. At Spago!
I guess not only the Joisey Wench at Fogo was raised by hyenas.
I'm not sure how I feel about Fogo anymore. It might still be a good place for lunch, as the Market Table is less than $20pp and is essentially a vegetarian buffet with a few cold cuts and sugared bacon. But it will be a while before I go there for dinner. To be honest, the huge jump in price, from $40-something last year to $62 this year is a deterrent. I understand that inflation has put food prices through the roof, and they probably have to pay higher wages to retain that many staff, but the experience is not worth it to me. If I'm going to pay $71pp (that's including my glass of wine), I'd rather be in a quieter restaurant with fewer patrons. Or one with Michelin stars. Or in New York. But hey, if you have an expense account, by all means go to Fogo. The food is good, as are the drinks. It's just maybe not for me anymore.