"But There's No Place to Eat in Midtown New York!" Part One: The 10 Best Fast Casual Restaurants

I hear it all the time, “there’s no place to eat in Midtown.” That is technically not true at all. There are hundreds of restaurants in Midtown Manhattan, an area that stretches from 14th Street all the way to 59th Street, and from the Hudson River to the East River--at least according to Google Maps. Other sources will tell you that Midtown starts at 34th or 23rd Street and stretches from 3rd to 8th Avenue. In any case, it’s a sizeable area, full of food. But is it the kind of food you want to eat? That depends.

If you’re happy with the sort of chain restaurants found nationwide, they are a-plenty in Midtown. Applebee’s, Subway, Olive Garden, TGI Friday’s, McDonald’s, Chipotle, and Au Bon Pain are all well-represented. Other eateries, like Le Pain Quotidien, and Maison Kayser dot the landscape along with Pret a Manger, Cosi, and Five Guys. If you’re like me, however, traveling is an excuse to eat in restaurants that I can’t find back home. So here’s a list of my favorite fast casual, multi-location, eateries that can be found in Midtown Manhattan, but probably not in my own back yard.

1. Shake Shack
Yes, there is a Shake Shack in Baltimore right now, and in a lot of other US cities, too, but if you’re from one of the 27 states that still doesn’t have one of Danny Meyer’s ridiculously popular hamburger restaurants, there are about 17 locations in New York City, six of which are in Midtown. Their hamburgers have become classics, but they also have hot dogs and a crispy chicken sandwich that is my personal fave. The Madison Square Park, Grand Central, and Penn Station locations offer breakfast sandwiches, and they all have frozen custard, which can be had as-is, or blended into a shake, float, or concrete. 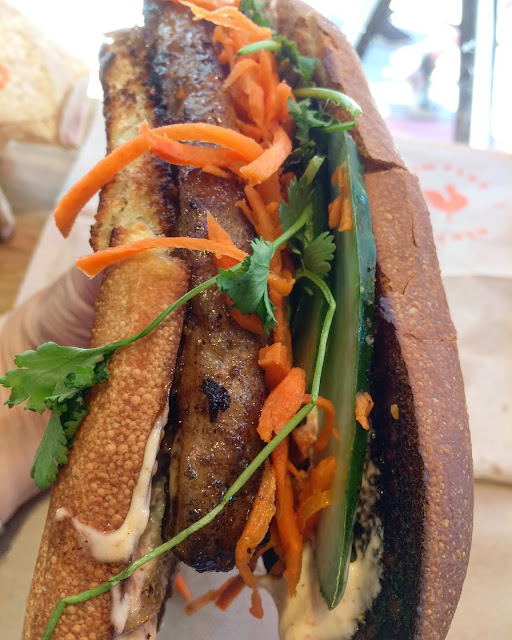 2. Num Pang Kitchen
There are three Num Pang Kitchens in Midtown, each offering hearty Cambodian-style sandwiches served on fresh and crunchy NY-baked baguettes. Served with cucumber, pickled carrots, cilantro, and a chili mayo, these sandwiches have a lot in common with Vietnamese banh mi. Eschewing bread? Num Pang also has salads and rice or grain bowls with tantalizing toppings like coconut tiger shrimp or peppercorn catfish. My go-to is the five-spice glazed pork belly on semolina, with a side of charred broccoli with spicy goddess dressing, but I would devour pretty much anything on the menu.

3. Xi’an Famous Foods
This spot famous for hand-pulled noodles started out in a 200-square-foot basement stall in the Golden Shopping Mall in Flushing. Rave reviews from major publications and bloggers alike allowed Xi’an to rapidly expand to 11 locations in Queens, Brooklyn, and Manhattan, four of which are in Midtown. The food of Xi’an (pronounced shee-ahn), a city in northwest China, combines both Chinese and Middle Eastern flavors, so don’t be surprised to find cumin and other spices intermingled with the more familiar má là, or “numbing and spicy” qualities shared by Sichuan cuisine. The restaurant’s now famous noodles come with lamb, beef, pork, or chicken, served with sauce or in a soup. There are veggie versions too, so everyone can experience their lovely, slightly chewy texture. 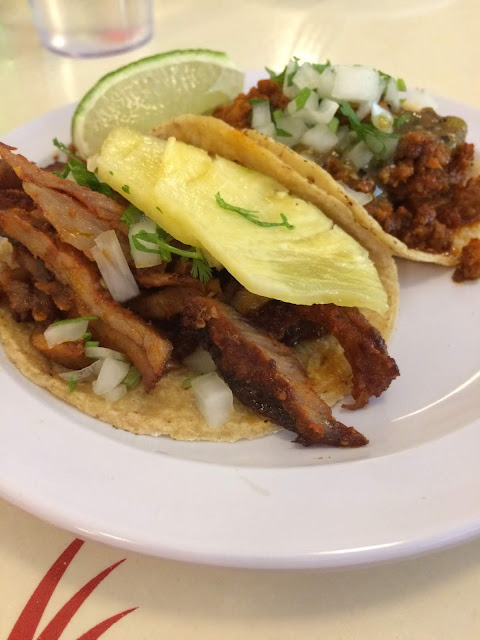 4. Tacombi
With two Midtown locations, every day can be Taco Tuesday at Tacombi. The menu is short but sweet (tacos, quesadillas, and a handful of other items) but has everything I need to satisfy my taco jones. Sometimes I crave a crispy beer-battered fish taco and at other times the Mexico City classic pineapple and pork al pastor. I can have them both simultaneously at Tacombi because their tacos are sold per each, and not in pairs or trios of one kind (so annoying). I can even go wild and do a black bean and sweet potato vegetarian taco and have a porky carnitas (literally, “little meats”) taco alongside. I am probably going to stuff my face with their esquites and guacamole, too.

5. BonChon
There are two Midtown outposts of this Korea-based chain that specializes in crisp fried chicken with either a spicy or soy garlic glaze. Though chicken is BonChon’s speciality, they also offer other pan-Asian favorites like pork belly buns, potstickers, and takoyaki. I like to describe the latter as pan-fried savory donut holes with bits of octopus inside, cuz that’s what they are. Traditional Korean dishes like japchae, bibimbap, and bulgogi are also available, as well as the chewy rice cakes known as tteokbokki, served with the currently trendy topping of mozzarella cheese. That’s next on my list to try.

6. The Kati Roll Company
While tucking into a feast of Indian food, have you ever thought, “there should be a burrito version of this?” Well, there is--sorta. In Calcutta (Kolkata, as it’s now known) there’s a popular street snack that involves rolling a paratha around a kabob to make it easier to eat on the go. Brillant, no? The Kati Roll Company offers these portable snacks with other fillings, too, like chicken or beef tikka, spiced lamb, or chana masala. They’re especially good with a pistachio or mango lassi, but also chai or beer, though don’t try to take the latter out onto the street.

7. byCHLOE
This all-vegan establishment is perfect for when you want a kale and quinoa salad to go, or a couple of gluten-free chocolate chip cookies as a mid-afternoon pick-me-up, but also if you’re looking for a great burger or meatball sandwich. The burgers are veggie, of course, filled with good things like beans, chia, and sweet potatoes, and the meatballs are made with portobello mushrooms. Honestly though, you won’t miss the animal protein. Some locations offer breakfast and brunch, but you can get avocado toast all day, as well as cold-pressed juices and even house-made organic goodies for your beloved doggo.

7. Dos Toros Taqueria
While there are a couple Dos Toros Taquerias in Chicago, the vast majority of this chain--started by two Cali-born brothers--is in New York. There are about half a dozen in Midtown alone, so taco-lovers don’t have to look very hard to find one. The menu is pretty simple: choose one of the naturally-raised antibiotic- and hormone-free meat (chicken, pork, beef) or veg options and decide whether you want it in tacos, burritos, quesadillas, or in bowl or salad form. While their food is good, Dos Toros also tries to be good citizens by using compostable plates, straws, cups, and utensils. They also support projects like the Michael J. Fox Foundation and Food Bank for New York. 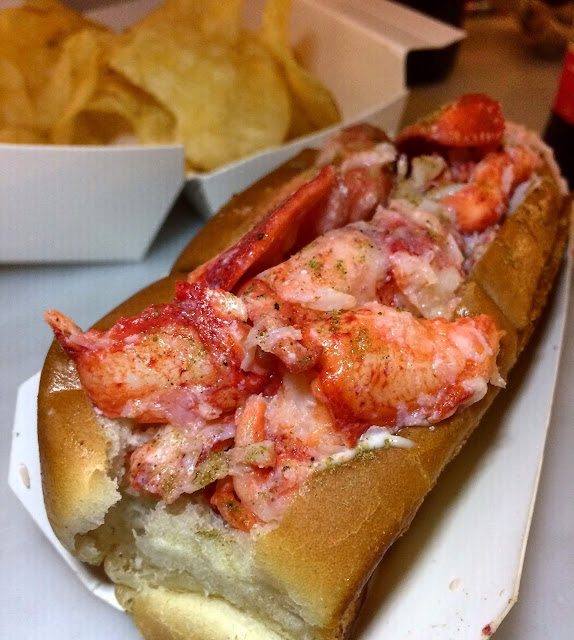 9. Luke’s Lobster
Have you noticed that Instagram pics of lobster rolls tend to get tons of likes? I’m going to go out on a limb and say the vast majority of IG users have never been anywhere near New England, original home of the lobster sandwich. These days there’s no need to travel. Luke’s Lobster has a bunch of locations on the east coast, with several in Midtown Manhattan. Their lobster rolls are Maine-style, that is, served with chilled meat and mayonnaise, on a traditional buttered split-top bun. They also offer crab or shrimp rolls, and you can get your shellfish on a salad, too. Maybe with a cup of clam chowder or half a lobster tail. Or both.

10. Sweetcatch Poke
As sushi-crazy as we are in the US, it’s no surprise that poke is everyone’s favorite new way to eat raw fish. Some Hawaiians will say, however, that the stuff we eat on the mainland is about as close to authentic as your favorite deep-fried, cream-cheese-stuffed, avocado-topped sushi roll is to the Japanese original. Sweetcatch Poke doesn’t seem too far off the right track though, with fairly classic tuna and salmon pokes, and a few other versions including one with tofu and one with...chicken. (Don’t worry, it’s cooked.) You can mainland the heck out of your tuna poke by putting it in a burrito with kale and pineapple or mango and pickled ginger, or you can have it simply on a bowl of rice with mixed greens. It’s tasty however you do it.